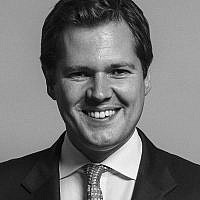 The Blogs
Robert Jenrick
Apply for a Blog
Please note that the posts on The Blogs are contributed by third parties. The opinions, facts and any media content in them are presented solely by the authors, and neither The Times of Israel nor its partners assume any responsibility for them. Please contact us in case of abuse. In case of abuse,
Report this post. 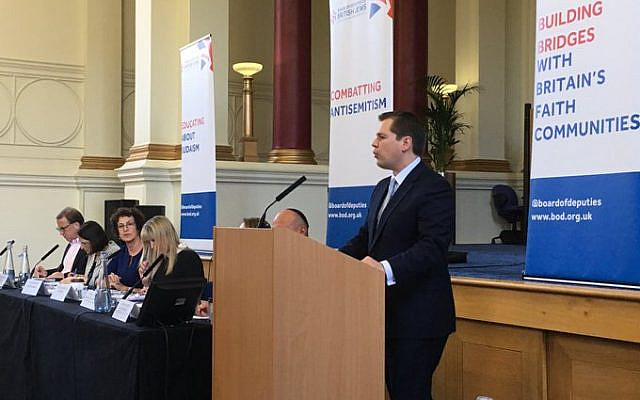 I was honoured to join survivors and leaders from over 50 nations at the World Holocaust Forum at Yad Vashem in Jerusalem last week. We came together to remember the Holocaust and renew our promise to victims and survivors.

On this occasion, the 75th anniversary of the liberation of Auschwitz-Birkenau, I was struck by the recognition that this was likely to be the last major event with a significant number of Holocaust survivors in attendance.

It is our duty to ensure that their stories are shared with future generations.

When British troops liberated Bergen-Belsen on 15 April 1945 they discovered 60,000 starving men, women and children, many of whom had only moments left to live. The scale of the suffering and the evil that perpetrated it, is almost unfathomable.

Today on Holocaust Memorial Day the Foreign Secretary,  Dominic Raab and I are announcing that the U.K. government will make a donation of £1m to the Auschwitz-Birkenau Foundation to help them preserve the site, so that future generations can see it with their own eyes.

The shameful truth is that the cancer of antisemitism did not end with the liberation of the death camps.

More than 80% of Jews feel unsafe in Europe today, while more than 40% have considered leaving. In recent years as many as 3% of European Jews have left annually. If you think about this for a moment, if this continued, in 30 years there would be almost no Jews left in Europe at all.

We will not rest until antisemitism is rooted out of our society. As Communities Secretary, I will do all in my power to protect our Jewish countrymen and women.

We were the first Government ever to adopt the International Holocaust Remembrance Alliance (IHRA) working definition of antisemitism and I am urging all councils and universities to adopt and use it.

Over 115 councils have already done so, together with many universities. Organisations should not accept public money, but decline the IHRA definition. Today I am also announcing further funding to educate university students and academics in the horrors of the Holocaust, supporting trips to Auschwitz for hundreds of university leaders who I hope will return to their campuses and take the fight to the anti-Semites and those that give license to them.

The government is committed to legislating to ban so called Boycotts, Divestments and Sanctions (BDS) by public bodies. BDS is divisive and sows tensions. And its obsession with Israel is disturbing as anti-Zionism is merely the latest form of antisemitism.

We will build the U.K. Holocaust Memorial and Learning Centre beside the Palace of Westminster and in Jerusalem I met the impressive curatorial team from Yad Vashem who are advising us.

When one walks out of the shadowy darkness of Yad Vashem, you emerge into the brilliant sunshine and beauty of the Jerusalem hills. There is a sense of hope for the future and wonderment at the remarkable resilience of the Jewish people. I felt that again when I returned home and looked at my own children, the great-grandchildren of concentration camp survivors.

We owe it to the victims to take on this hatred with every fibre of our beings and build the better world they could only dream of.