The Blogs
David Stav
Apply for a Blog
Advertisement
Please note that the posts on The Blogs are contributed by third parties. The opinions, facts and any media content in them are presented solely by the authors, and neither The Times of Israel nor its partners assume any responsibility for them. Please contact us in case of abuse. In case of abuse,
Report this post. 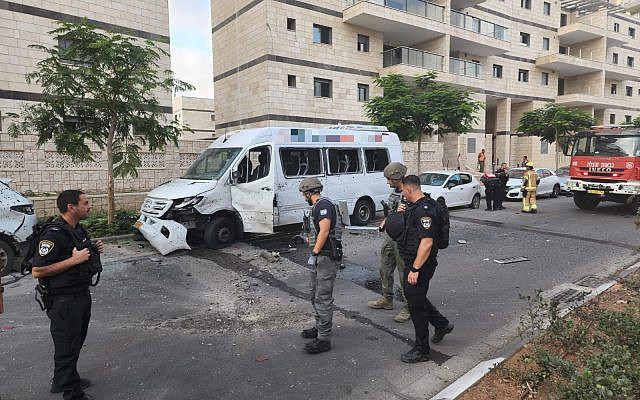 Police inspect damage from a rocket strike in the southern city of Ashkelon, after barrage launched toward Israel by a Gaza terror group, August 6, 2022. (Israel Police)

In the midst of World War II, as the Nazi forces were approaching the land of Israel from the south, the Jews living here at the time were engulfed with fear over what might happen if they succeeded in occupying the country and the Jewish population centers.

Rabbi Yitzchak Herzog (grandfather of the current Israeli president), who was the chief rabbi of the Jewish community, is believed to have said that our tradition teaches that there would not be a third destruction of the Temple, and therefore there was no need to fear that an invasion was forthcoming. As we all know, the German army never made its way all the way north and was eventually stopped within the African continent.

That teaching inspired a school of thought among certain communities that regardless of what might occur or how divided we might be as a people, there is some sort of heavenly assurance that our national destruction will never again occur — and that our safety as a people will always be assured.

Without getting into the question of whether there is or is not such a concept that there would never be a third destruction, it is certainly true that such an assurance cannot be seen as a given. While undoubtedly we can believe that Hashem will protect us in times of need, it would be completely irresponsible to assume that we are defended against all types of threats – and in particular the damage that we can do to ourselves as a people.

Throughout the ages, we have lived with a certain understanding that “every generation where we fail to rebuild the Beit Hamikdash in our days, it is as if it has been destroyed in our times.” This teaching is intended to serve as a social warning, whereby we need to remember that the destructions we experienced in centuries past should never be forgotten.

These tragedies must be internalized, not just as events of the past, but indeed as very real aspects of our contemporary national identities. A Jew should always be asking himself or herself: what is it that I have done that is preventing the rebuilding of the Beit Hamikdash.

Not what was done in the past, but what is being done today to prevent that return.

That is a reality we see in the texts of the Kinot (laments) which are read on Tisha B’Av, where events throughout history like the Crusades, mass burning of the Talmud, among other tragedies are detailed. Many other horrific events, including the Inquisition, are directly connected to this day.

Sadly, one can easily recognize that even today, we remain in a time of social destruction. I am not, God-forbid, suggesting that the State of Israel is threatened because the reality is that this modern nation is a thriving result of massive dedication by generations of pioneers and is nothing less than a gift from God.

But destruction is not only when a society collapses or switches hands from one ruler to another. If we look at the destruction of the First Temple, we know that the collapse began with the division of the land between the kingdoms of Judah and Israel. From there, the path to the tragic destruction became only a matter of time.

We must recognize that to live in a country where there are millions of Jews who look upon their fellow Jew as “the other” — where they disparage them in the most vile of terms, like “Amalakite” or “Nazi.” This is a modern form of social destruction. It is destruction of dialogue, destruction of community, and even destruction of Torah Judaism.

Over the generations, one of our people’s saving attributes, even in the days of intense rivalry between the camps of Shammai and Hillel, was that there were always limits to the level of that debate. Political and halachic disputes were certainly intense, but deep ideological or personal conflict was another thing altogether.

We just completed yet another challenging military struggle that again saw our people facing the threat from our enemies. During these times of crisis, it is perhaps easier to recognize that we are all one people. Just like those enemies do not differentiate between right and left, religious and secular, we similarly should not make those distinctions. It is sad that it takes external threats to remind ourselves of the power that we have when we are united, but we need to do everything we can to find that strength of unity even in times of peace.

In eras past of Jewish history, the ideological unity that prevailed allowed different factions to debate one another with the utmost intensity and both sides felt free to express their positions because the sense of national love always superseded individual perspectives.

But if we allow violence and hatred to increase by the day, we lose the hope that any such sense of love and unity might prevail over hatred. This is a lesson that we need to remember each and every day, but all the more so during times of internal stress and tension that often emerge during election cycles. It is worth remembering that our enemies only ever have a chance to defeat us if we make the mistake of first defeating ourselves.

About the Author
Rabbi David Stav is the Chief Rabbi of the City of Shoham, Founder & Chairman of the Tzohar Rabbinical Organization.
Related Topics
Related Posts