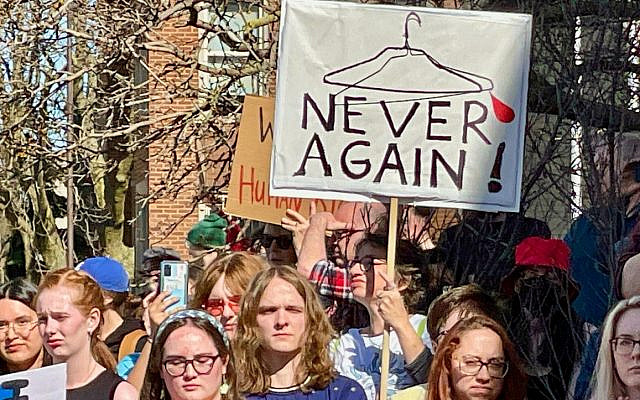 A demonstration on May 7, 2022, in Milwaukee, USA, against the anticipated reversal of Roe v Wade by the US Supreme Court. (Susan Ruggles / Wikimedia Commons).

In reaction to the US Supreme Court’s reversal of Roe v Wade, Merav Michaeli, a member of Israel’s government, said, “One of the world’s great democracies is taking us back to the dark days when a woman had no rights over her body.” But this institutional assault on women in America is only the latest tragedy perpetrated in the name of religion.

The women who will die in back-alley abortions due to this US Supreme Court decision will not be the first or last victims of religious fascism. History is lined with the corpses of its victims.

From religion-based discrimination and violence against women.

To the children in Gaza who are taught terrorism in the name of Islam.

To the genocide of native North Americans by European Christians.

To the mutilations, lynchings, and shootings of Black Americans in the name of “white” Christianity.

To centuries of abuse of homosexuals in the name of most religions.

To the Islamic conquests that built an empire through violence and forced conversions.

To the witch hunts and inquisitions that burned alive innocent people.

To the Christian persecution of Jews that culminated in the Holocaust.

To 9/11 and the many terrorist attacks that use Islam as an excuse.

To the genocide of Kashmiri Hindus at the hands of Islamic extremists.

To the Thuggee cult members who strangled many innocent people as a sacrifice to the Hindu goddess Kali.

To the Mountain Meadows massacre committed by Christian extremists.

To the horrific Aztec human sacrifices to appease “the gods”.

To the Armenian genocide and associated forced conversions to Islam.

To the use of the Christian Bible to justify slavery.

To the many other crimes committed in the name of religion.

Is it not time to say that enough is enough?

Is it not time to say that religion belongs at home as a tool of self-healing and not in government institutions as a tool of mass murder?

We need to take away the power of the religious fascists by no longer listening to their words of hatred and ignorance.

We need to start letting our better instincts guide us based on facts and common sense.

It is time that we start thinking for ourselves.