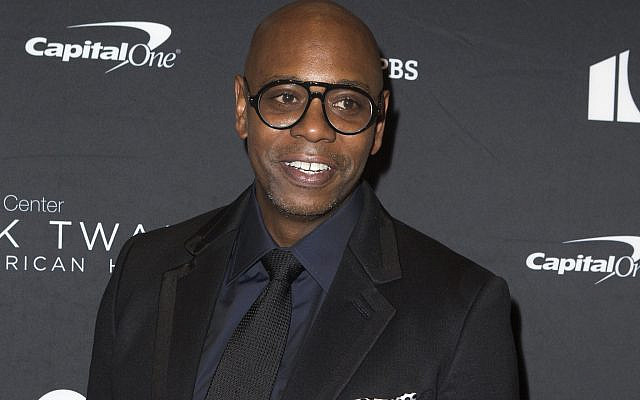 Comedian David Chappelle made headlines last week by concocting a rather amusing fiction that Jews in ancient times colonized outer space, and when that didn’t work out, decided to take over their home world instead.

I’m not going to try to discern the manner in which this storyline corresponds to how Chappelle understands Jews. But obviously the minute someone makes any reference to Jews taking over the world — regardless of the context — you know that person has touched the third rail.

However, I find the notion that ancient Jews were advanced enough to develop interstellar travel quite flattering. In religious terms, it can be quite an apt description of what Judaism claims to be: something not from this world.

Unlike Christianity, which literally humanized God, and Islam, which envisions the afterlife in quite physical, hedonic terms, Judaism is founded on the belief in the existence of a Being who, in His essence, is totally removed from His creation. He occupies a place far above our finite reality. No physicality, no limitations, completely transcendent.

Yet somehow, the Jewish people made contact with this extra-cosmic Being.

So why are Jews also “space Jews” you ask? Because once that contact was made and a relationship was formed, this extra-cosmic Being, in His benevolence, gave us a guidebook that remarkably shares this extra-cosmic dimension. Jewish tradition teaches that the Torah was written 2,000 years before the creation of the Universe.

It is also not from this world.

The genius of the Torah is that it can be read as a contemporaneous account of the historical development of world civilization and early Jewish history, while at the same time convey messages and commandments which help Jews transcend their particular context of time and space. Through the Torah, Jews can connect to that extra-cosmic realm occupied by the Creator. Hence, we are “Space Jews.”

But this comes at a price. The ability of the Jew to transcend his physical circumstances and surroundings makes him somewhat aloof from the rest of humanity. Let’s say it like it really is: religious Jews often give off the impression that they don’t really belong among “regular people.” Religious Jews are at best tolerated by the general population — never fully integrated or assimilated. Like our patriarch Abraham wandering in the Land of Canaan, Jews are merely guests, temporary residents in this world — not naturalized citizens.

And from the religious perspective, that’s exactly how it should be.

Jewish liturgy expresses this distinction between the other-worldliness of Jews and the terrestrial nature of non-Jews in the opening phrases of the “Aleinu” prayer:

It is incumbent upon is to render praise to the Master of all, to ascribe greatness to the Creator of the Beginning. For He has not made us like the nations of the lands and has not positioned us like the families of earth…

Throughout rabbinic literature, the term used to identify a Jewish boor or an ignoramus is “am ha’aretz” — literally, a [member of the] nation of Earth. Being associated with “terrestrial living” is not a compliment in Jewish tradition.

On the positive side, religious Jews consider themselves ambassadors to the Earth representing that extra-cosmic Being. They are only truly “home” when they are together with God in His extra-cosmic realm — via their immersion in prayer or in the study of the Torah and its rich and occasionally “alien feeling” culture.

And here is where the Jewish plot of world-domination has a kernel of truth. You see, in a very significant sense, it’s already happened. As far as the moral sphere is concerned, Jews have already “taken over” the West and much of the Middle East through fathering the religions of Christianity and Islam.

As the historian Paul Johnson wrote in his insightful “A History of the Jews,” the biblical version of morality was a very sharp departure from many fundamental the notions of the ancient world at the time. Jewish ideas like “equality before the law, both divine and human; of the sanctity of life and the dignity of human person; of the individual conscience and so a personal redemption; of collective conscience and so of social responsibility; of peace as an abstract ideal and love as the foundation of justice, and many other items… constitute the basic moral furniture of the human mind.”

And some of those who appreciate the truth of this monumental Jewish achievement really resent us for it.

Adolf Hitler, in his book, Mein Kampf, claimed that the Jews were responsible for sapping the strength and vitality of the great German people. Hitler apparently recognized that Jews brought the idea of a conscience to the world. That pesky conscience demands we treat all human beings with equal dignity and not to construct hierarchies of “superior” and “inferior” people. It urges us to make personal sacrifices to protect and care for those less fortunate than ourselves. It stubbornly stands in the way of people acting on their natural-born instincts — to kill off the old, the sick, and the insane who are a drain on national resources, and for the strong to dominate the weak (which is exactly what Hitler wanted the German people to start doing).

Hitler’s war with the Jews was in reality a war to counter the invasion of the “Space Jews” who brought the Torah’s morality to humanity, and successfully redefined Western civilization with it.

So I thank Dave Chappelle for humorously increasing awareness of this sense of “otherness” that Jews are fated to carry around with them on this planet. And perhaps instead of railing against it and trying in vain to become indistinguishable from the rest of humanity, Jews should authentically own their “extra-cosmic” identity.  Think about it — being God’s moral ambassadors to the Earth is certainly worth the price of never fully blending with the terrestrials.