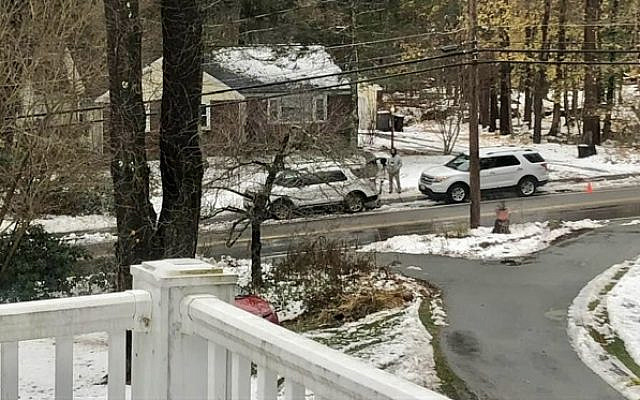 This week marks four years since my family was thrust into a role no one ever wants to play. Four years ago, a man with a knife entered our home, announced that we were in his house, and that if we didn’t get out, he would kill us all.

He beat me, which required 37 staples in my head. He terrified our children. He stabbed through the bathroom door, my husband with his body pushed up against the other side.

It was less than three weeks since the Tree of Life shooting in Pittsburgh, and we were Jewish, living in a very Jewish town. My husband is a rabbi. The obvious question was — what was this man, who lived a half an hour away, doing at our house in the middle of a surprise November snowstorm? Was our public Jewishness seen as some sort of invitation?

The man who attacked us, it seemed clear, was in the midst of a psychotic break. But we were not the only ones who wondered if the attack had been the result of a person with mental illness being radicalized, and as a result weaponized, to attack Jews. The police and DAs spent countless hours interviewing him, studying his online presence, speaking to his friends and acquaintances, searching for a manifesto. After more than a year of investigation, they found very little, only a history that likely would have kept him from purchasing a gun here in Massachusetts, something we are thankful for every day.

So, it seemed, we were just unlucky. Unlucky to have been in the wrong place at the wrong time, at the moment that our attacker was unlucky enough to have lost touch with reality. And we’ll likely never know the whole story, because he was also unlucky enough to contract COVID in jail, the process of getting him long term psychological treatment having been delayed by all that COVID. He died the day after testing positive.

I hesitate to even bring up mental illness in the context of violent attacks or shootings, because it attaches stigma to a group of people who deserve it not at all. The problem with people with mental illness is not that they are dangerous, but that so many are emotionally vulnerable. And people who are emotionally vulnerable can be more easily manipulated. Which, if you think the likes of Tucker Carlson don’t know that, I’ve got a bridge I’d like to sell you.

As with propaganda that pushes an anti-vaxx agenda, often disseminated by people who themselves are vaccinated, the people who go online, or on television, to amplify conspiracy theories and hate speech, they feel protected by the hard glass screen that separates them from the consequences of their irresponsible incitement. But their dog whistles pierce the ears of fragile listeners who are periodically inspired to “help” by taking matters into their own hands. Anyone with a public platform, on Fox News or on SNL, in the Wall Street Journal or on Twitter, in Congress or the Knesset, needs to take stock of the care they are taking with their influence.

In the aftermath of my own attack, I was startled by the feeling that all of us — my husband and I, my children, the man who entered our home — we were all victims of forces from the outside over which we had no control. Paul Pelosi, too, recently a member of this most absurd club, seems to be a victim not just of the violent man who entered his home. He and his kidnapper both seem to have been victims of a cynical right-wing disinformation machine from which we are not one bit safer now that this single lone attacker finds himself behind bars.

As the DA we worked with pointed out, we will never be able to completely prevent unlucky events like the one that my family went through. Once in a very long while, a person loses touch with reality, and becomes violent. Usually, as in our case, it is because they imagine that they themselves are in danger. But the writing of manifestos, the retweeting of QAnon conspiracies, the blaming a Jewish cabal for every bad thing that happens in our society, these are not unfortunate accidents. They are not unpredictable lightning strikes — they are carefully prepared, with malice aforethought. And they lead to completely predictable and potentially tragic outcomes.

About the Author
Leah Bieler has an MA in Talmud and Rabbinics. She teaches Talmud to students of all ages and backgrounds. Leah spends the school year in Massachusetts and summers in Jerusalem with her husband and four children. Sometimes she writes to get a break from them. The children, that is.
Related Topics
Related Posts