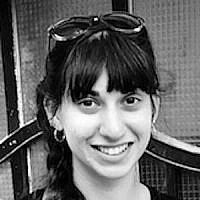 The Blogs
Gabriela Mischel
Apply for a Blog
Please note that the posts on The Blogs are contributed by third parties. The opinions, facts and any media content in them are presented solely by the authors, and neither The Times of Israel nor its partners assume any responsibility for them. Please contact us in case of abuse. In case of abuse,
Report this post.

A few weeks ago I could easily count the number of people in my life who knew about my struggle with anorexia and depression. That is no longer true. Last week I released a video with my story to the world.

For years I was ashamed and embarrassed about my struggles with mental illness. I hid that piece of my life from everyone around me for fear of what they would think. I thought that if I shared my struggles I would be viewed as weak and unstable. Most people didn’t know about that piece of my life, and I had every intention of keeping it that way.

I spent my teenage years consumed with feelings of not being worthy, deserving, or good enough. I had convinced myself that I needed to be perfect, so I set impossible standards for myself. I wanted to fit this ideal that I had created in my mind, and I nearly let that kill me. While most people my age were worrying about first loves, graduating high school and other teenage concerns, I was worrying about how many calories I had consumed, or how much weight I had gained. I was stuck in a world that revolved around numbers. I spent years going through the same cycle of relapse, recovery, relapse, recovery, on and on. It consumed my life for years.

When I finally got to a place where I was able to hold a job and lead what would be called a more “normal” life, I never once considered telling people about these struggles. These aren’t things you can just waltz into an interview and share with people. Mental illness is misunderstood, and I was scared of being labeled a certain way. So, I kept my past to myself and that seemed to be working.

A few years ago, I was lucky enough to land a job at Jerusalem U, a nonprofit that harnesses the power of film to educate and strengthen the connection of young Jews to Israel and their Jewish identity.

Though I built close friendships at work, until a few months ago only one co-worker of mine knew about my struggles with mental illness. And I’ll tell you a little secret, that co-worker happens to also be my mom.

But then something changed. A few months ago, I was casting for a short video series, and we hit a wall. We were producing a series about personal journeys from despair toward empowerment and self-love. The idea was to feature people with a range of stories touching on different issues. Right off the bat, we had a few topics we knew we wanted to cover, one being mental illness.

This immediately struck a chord with me because of my own personal experience with mental illness. I knew that I was going to put everything I had into this series. We had an opportunity to make a difference, and I was excited.

We started casting for the series, but we were struggling to find someone to go on camera and discuss their struggles with mental illness publicly. I couldn’t blame anyone for making that decision — I was doing the same thing. After hitting a few dead ends, we began wondering if we should give up on the mental illness angle and look for another story instead. It was an important topic to talk about, but we couldn’t tell a story we didn’t have.

As we discussed this issue, I would think to myself, “I could talk about this topic,” but I kept pushing the thought away. I had worked so hard at hiding that piece of myself, and I wasn’t about to get on camera and tell my story now. And then one night I jolted awake at two in the morning with the realization that I had to tell my story. The opportunity to make a difference was right in front of me, and I was going to look past it because I was scared.

I realized that if let my fear of being judged keep me from telling my story, I was no better than all the people who made me feel I needed to hide that part of myself. The next morning, I called the director and told him that I was going to tell my story on camera.

For so long, I had feared telling people about my past, but as soon as I started, I realized how wrong I was. They didn’t judge me or perceive me as weak. Learning about my struggles made me stronger in their eyes. I was so sure that I was going to be judged that I didn’t know how to react to all the positive feedback I was getting. I know that without their support, I would not have been able to follow through with telling my story on camera.

When the day came to film my story, I felt ready. I’m a naturally shy person, and I was definitely out of my comfort zone. But as soon as it was over I knew I had made the right decision.

My goal in sharing my story was to help other people know they’re not alone. It’s hard to share our struggles and stories, but if we don’t, people going through similar experiences will never understand that others have walked this path, and it can get better.

My struggles and my past are a part of me. Obviously it sucks that I had to struggle with mental illness, but it made me into the person I am, and that is something I can live with. I hate when people tell me that what they went through is nothing compared to me. Anyone who is able to overcome their struggles is a hero in my eyes. The scope of your struggles isn’t what’s important. If you overcame the cards you were dealt, you should be proud of yourself.

Life isn’t always fair and unfortunately, many people learn that the hard way. I was one of those people. I spent years living in a dark place and thinking about how unfair life was. It was not a way to live. If all you see is the bad, you won’t ever be happy. It’s not always easy to find the good, but it’s so important to remind yourself that there is good in the world, even if it’s just the small things. At the end of every day, I try to think of two good things that happened that day. They can be anything — I smiled at someone, I liked my outfit, I had fun, I love my family, anything. It forces me to remember that there is so much good, even when it feels like everything is bad. I hope that by sharing my story I can help other people remember that there is good out there, and that they are not alone.

About the Author
Gabi is a pastry chef turned film maker. She is a short films producer at Jerusalem U. Jerusalem U, is a non-profit that harnesses the power of film to educate and strengthen the connection of young Jews to Israel and their Jewish identity. In her free time you can find her writing, knitting, or baking.
Related Topics
Related Posts
Comments
Advertisement