May 1981 – 9 hours at night on the deck of a cruise ship from Haifa to the city port of Limassol in Cyprus, equipped with a sleeping bag in my early 20s,  is my strongest memory of the neighboring island. The ship was swaying from side to side. The eyes on my fellow passengers started looking like they were in a drunk daze, because of the momentus rock. A sail not to be forgotten. Limassol port was waiting calmly at the end of this voiage. I disembarked into Cyprus, remembering for some reason one fact – that this country was until recently headed by an Archbishop.I found it fascinating. Over the years I have studied Archbishop Makarios political philosophy which I must admit was pretty controversial. But that’s a different story.

Early May 2022, many years after, I found myself celebrating a momentous birthday in Paphos, in west Cyprus. Arriving by air within 45 minutes was truly enjoyable.The next day was dedicated to exploring the Troodos mountains with a four wheel drive vehicle and a guide. We enjoyed the cool, pine-scented air, exploring quiet and sometimes deserted villages and lonely monasteries. However, our guide Andreas Tsokkalides, Owner at Cyprus EcoTour Adventures – the best knowledgeable guide I ever had, took me back to Cyprus early political challenges. The vehicle was jumping in the dirt road and the memories of the ship swaying from side to side on the way to Cyprus 43 years ago kept coming back. Especially when we were debating for hours about Makarios’ role in the history of the Island. I must admit I found it fascinating, especially that I remembered so many details, and still Andreas outweighed me constantly. During the amazing tour I found myself in one of the Troodos picks. It was a significant point. Facing an enormous statue of the Cyprus father of the nation 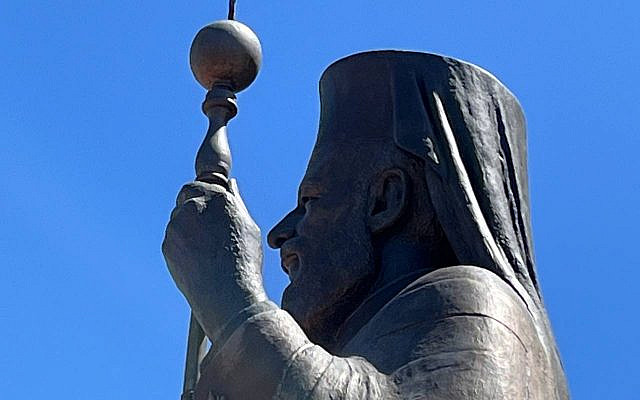 (Makarios might be considered similar to Israeli David Ben Gurion),it was clear how much respect Greek Cypriots carry to their founder. His tomb is constantly guarded by two soldiers. Add it to your travel list in the Troodos and visit the adjacent chapel next to it. 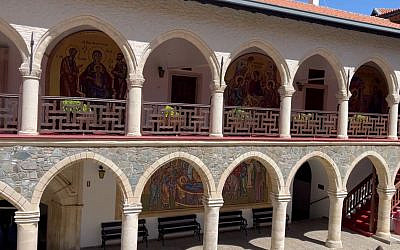 Not far, Kykkos Monastery, one of the wealthiest and best-known monasteries in Cyprus, is a must visit. It looks totally new, however it was founded almost a 1000 years ago. There are no remains of the original monastery as it was burned down many times. Archbishop Makarios started his career there as a monk in 1926. No wonder his tomb is so close. 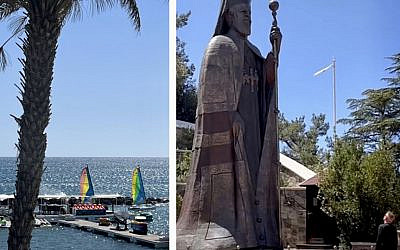 Andreas takes us to secret small waterfalls and wonderful hush-hush points in the Troodos. One of them is the medieval ancient Venetian stone bridge above the Diarizos stream. Make sure you spend an hour there to enjoy a true Troodos environment.

The rich wine history of Cyprus has been alive and ongoing for thousand of years There are more than 40 operational modern wineries and wine tastings are a true  pleasure. A refreshingly sweet, fruity and light wine , but with a blue color? Apparently at the Linos winery and despite its artificial looking appearance, the strange color is in fact natural. Blue wine can be fermented using a combination of red and white grapes. The natural blue hue is created from anthocyanin, a pigment found in the skin of the grape, and a dye called indigotine which is extracted from plants. Amazing. 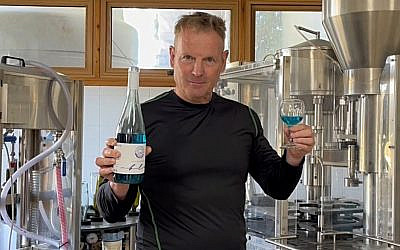 A refreshingly sweet, fruity and light wine , but with a blue color anyone?(photo by Motti Verses)

We made our way west by sunset to Paphos.  The Lighthouse there, built in 1888 during British rule,  is an iconic symbol. This ancient port city attracts beach holiday seekers, enjoying both sandy beaches and ones with a mixture of sand with gravel. Endless waterfront hotels facing the Mediterranean attract mainly tourists mainly from the United Kingdom. It was great to see Paphos so busy and relatively crowded as the pandemic shows a surrendering sign.

The Ottoman fortress by the ancient port is another city symbol worth a visit.Next to the port , traditional crowded restaurants offer the best of the Cypriot cuisine.From a greek salad, haloumi cheese, seafood options to Kleftiko, the tender and hearty lamb dish. The sand-brewed Cypriot coffee using a 500-year-old technique, was always my favorite and I never missed an opportunity to taste it again and again. 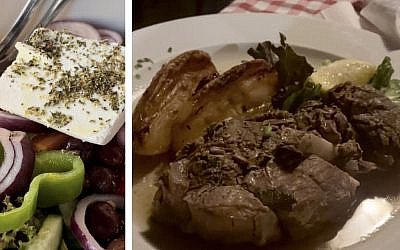 A must taste – Greek salad and Kleftiko, the tender and hearty lamb dish (photo by Motti Verses)

The pampering Almyra hotel in the heart of Paphos became our home. The hospitable Israeli General Manager Radu Stefan Mitroi runs this property professionally and smoothly, constantly highlighting the dedication of his employees. 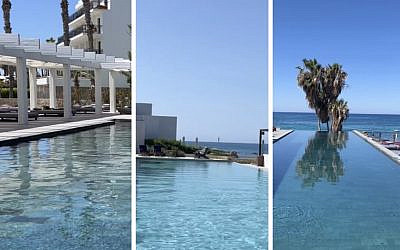 “Almyra, for the ones of you who don’t know the meaning, means the taste of the sea. The saltiness that you feel in the air, Almyra is exactly the distance between us and the beach”, he says. “The Almyra luxury hotel seats 45 minutes away from Tel Aviv Ben Gurion airport . We have 6 weekly flights coming into Paphos these days. So the ones of you that want to enjoy the true Mediterranean hassle free vacation, come by to Almyra, enjoy our restaurants, our Greek taverns, state-of-the-art kids club and a fully renovated hotel. Enjoy our Spa and  for the ones of you that are accompanied by their small friends, we are a dog friendly hotel as well. We have a dog park. We are waiting for you. Come by”, he says with an inviting voice. 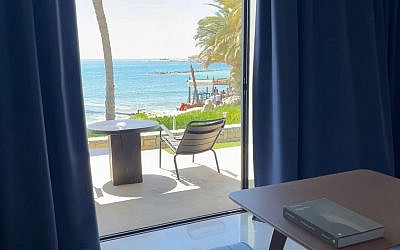 I must admit. Spending 3 nights in this hotel was a dream come true, as our room facing the Mediterranean, 20 metres from the waterline was priceless. My birthday was marked by the Spa unforgettable treatment. A true body and soul rejuvenation. When the guest relations agent knocked on the door with a surprising Happy Birthday cake and a candle, the day was perfect. 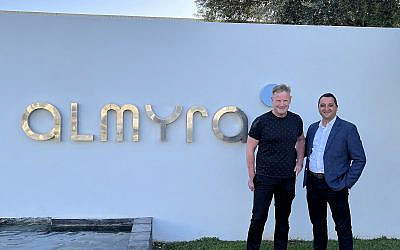 Western Cyprus is indeed close to Israel. The rates are extremely reasonable, the food choices in the restaurants are endless and the environment of a vacation overseas highlights advantages one should consider seriously. This might be your next break.