Reading Israeli author Magi Otsri’s debut novel “Dedika’s Two Suns”, one will be uncovered to the life of a jewish family that migrated from Georgia to Israel in the 1970s. ”All my life I was exposed to racist jokes about the immigrants from Georgia and I felt that those prejudiced judgments should be dismantled”, she said upon the launch of her book,  7 years ago. All my life I was familiar with this stereotype of Georgians, however as Head of Public Relations for Hilton Hotels Israel for many years – till last November –  Georgians were always connected to wedding celebrations. They took place in the Grand Ballroom till sunrise, involving tons of food, loud music, folk singing, toasts and traditional dances. Pure happiness.

My flight to Georgia took off from Ben Gurion airport with a crowded jet and within 2 hours landed in the small Batumi airport on the Black Sea coast. A 5 day trip did a positive job to all the passengers. We found an illustrious nation with people extremely proud of their country and what they have accomplished despite a centuries-long occupation of the Russian Empire. Georgia is considered to be one of the most friendly countries. Its beauty is not only in its attractive scenery, but also in Georgian people, who are the most valuable treasure for the country. They are warmly honest and kind. When meeting foreign tourists, they always respond with a warm greeting and a smile. 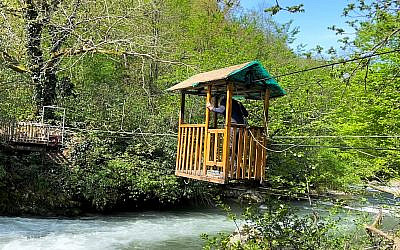 Adjara is a must visit for hikers, addicted to enjoy crossing rivers and climbing mountains (photo by Motti Verses)

We encountered their smiles almost everywhere in Adjara, one of the most picturesque regions in Georgia. It is relatively a small piece of land with beaches, forests, waterfalls and floating rivers. It is highly recommended to travel the countryside with a personal driver, as costs in Adjara are extremely low. Israelis will find that they will spend a third of  what they pay at home on almost everything they consume. A driver will pick a tourist in his hotel, preferably in the city of Batumi, spend an entire 8 hours trip to the Caucasian mountains, for 150 NIS in local currency.

As Georgia offers a mild climate that allows tourists to visit almost all year round, and with the current war in Europe, forcing the locals to manage without their prime tourist markets – Russia and the Ukraine, Israelis find themselves the leading market in this part of Georgia. The plains are full, and with a daily flight, there is a good chance that the first person you will meet in a hike in the mountains, rafting on a river or taking pictures under a gigantic waterfall will be an Israeli. 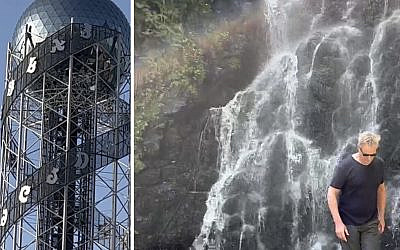 Lesser Caucasus powerful spectacular waterfalls and the Alphabetic Tower in Batumi, symbolizing the uniqueness of the Georgian alphabet (photo by Motti Verses)

We met them in the famous Botanical Garden – one of the largest botanical gardens in the former Soviet Union. The magnificent green landscape collection comprises more than 2000 taxonomic units of woody plants, including a 100 of Caucasian origin. A 30 minutes ride with an electric open air vehicle was pleasant, and we managed to see the entire park’s highlights. Truly recommended. 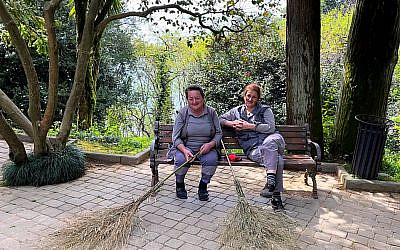 On the shores of the Black Sea , Batumi is a lively and energetic city. The moving steel sculpture of Ali and Nino –  a man and a woman, became an iconic local landmark. They slowly move to each other, touch and separate.It symbolically represents the attraction between the genders. The old town is known for the variety architectural treasures- buildings decorated with chimeras, mermaids, Atlantis and other mythical creatures, however new impressive skyscrapers pop frequently along the thrilling promenade. At night Batumi is even more exciting with its breathtaking illumination. 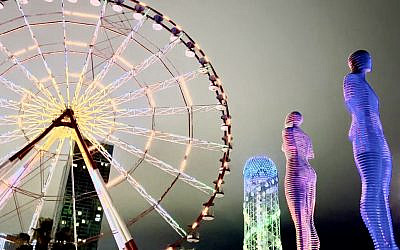 Casinos are key attractions in Batumi, but for my money their main attraction is the cuisine. Food plays in the Georgian culture a very important role, and traditional dishes are quite “heavy”,but a must taste. Khinkali, dumplings stuffed with meat, is a very popular dish in Georgian cuisine. It is made of twisted knobs of dough, stuffed with meat and spices. Khinkali is eaten plain or with ground black pepper.  Most Georgians will use only one’s bare hands while consuming these dumplings. The use of utensils, like a fork, is considered incorrect. This is because juice is an important part of khinkali; using a fork will rupture the dumpling and the juice will be spilled. Khachapuri, another traditional dish, is cheese-filled bread. Its center is filled with a mixture of cheese, eggs, and other ingredients. The bread crust is traditionally torn off and dipped into the cheese. 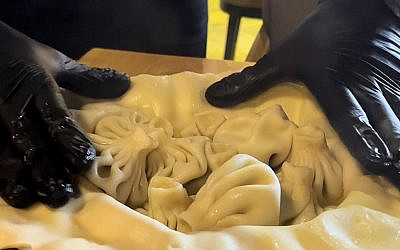 We made the Hilton Batumi with the breathtaking view of the Black Sea our home in Adjara. Our hospitable host is a newcomer, just a few weeks in this pampering hotel. “One of the first things that impressed me when I came here was the view from the Hilton”, says General Manager, Patrick Naughter. “We have a terrace on the 20th floor with an interrupted view of the Black Sea and it’s really stunning. The hotel of course is a very attractive hotel.You might consider me subjective. I am. As the General Manager it is a very beautiful hotel. And I’ve been hearing this from a lot of the guests I have been meeting already. Batumi is a very popular destination. I’ve seen this professionally, as well as personally. It’s a very popular market for Israeli tourism.This is my personal invitation to you. Please come and have a look at Batumi. Please come and see our hotel. I don’t think you will be disappointed”, he says. 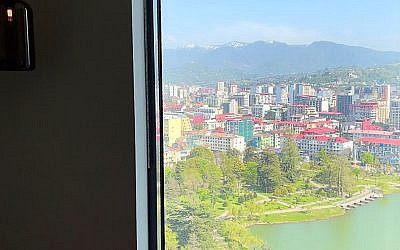 Batumi scene from the Hilton’s corridors (photo by Motti Verses)

This 247 room beachfront hotel offers  floor-to-ceiling windows, executive lounge and a stunning rooftop Bar, It is indeed close to entertainment, shopping and restaurants and the restored Old Town. The staff is extremely hospitable and we felt like home. 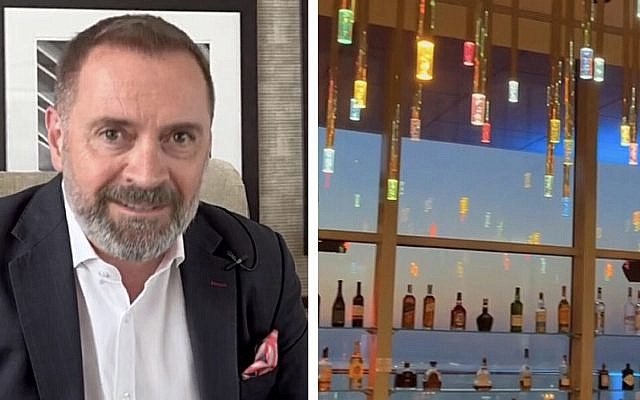 Adjara in west Georgia – This might be your next break.