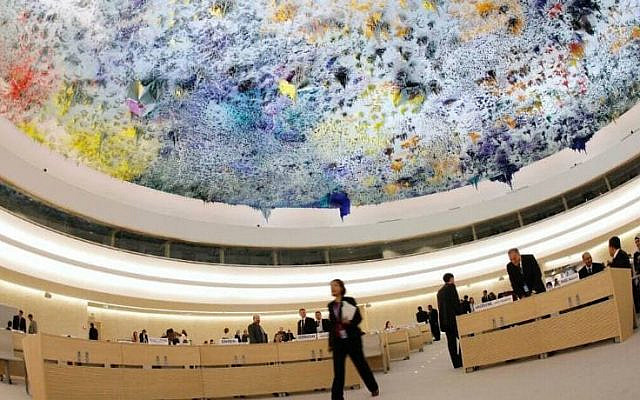 Illustrative: Delegates arrive on the assembly hall of the Human Rights Council at the European headquarters of the United Nations in Geneva,

Western dual human rights standard: red carpet for one; Sanctions and criticism for the other.

As current facts show, the issue of human rights, rather than defending fundamental human rights, is a pretext for expanding the dual standard used by the United Nations, Western countries, especially the European Union, in dealing with offenders in various countries.

The performance of the United Nations, the West, and especially European governments, is fraught with duplicity, discrimination and unfair human rights, and even if viewed from the perspective of codified law and Western standards in the field of human rights. The question still arises as to, who these claimants are. How and by what criteria do human beings and democracies formulate and enforce their laws, sanctions, and human rights declarations?

Human rights are the most fundamental rights that every human being enjoys inherently, instinctively, and simply as a human being, but what is being debated is what criteria do these claimants have for human rights in countries like the mullah-ruled Iran, Belarus under Lukashenko’s rule, Syria under Bashar al-Assad, or even China under the Communist Party? And why do they deal differently with human rights abuses in each of the countries under dictatorial regimes?

European governments are among the countries, who are proud of their democratic system, and the rule of law, but when they deal with countries in other parts of the world, they impose a double standard on the spirit of democracy.

To further clarify this double standard, we will cite two relatively similar events that took place in Iran and Belarus.

The first was the shooting down of a Ukrainian plane on January 8, 2020 by IRGC missiles in Iran, and the second was the abduction of a Belarusian journalist and his accomplice after the forcible landing of the plane on Ukrainian soil.

In the first case, the tragic crash of a Ukrainian plane in gross violation of all human rights, more than 176 innocent people were killed by direct order of the dictator of the Islamic Republic of Iran, Ali Khamenei. But in the second incident last week, only two Belarusian activists (in gross violation of human rights law) were arrested after landing their plane on Belarusian soil, and the other passengers were safely flown to the destination country, Lithuania.

The second incident, was accompanied by a sharp reaction from the European Union. EU member states have banned Belarusian planes from passing through their airspace and called on EU airlines not to cross Belarusian airspace. EU leaders have also decided to impose tough economic sanctions on some Belarusian government officials. They also placed a number of Belarusian industries and companies on the sanctions list.

Now the question is; did the EU apply the same standard in the deliberate killing of 176 innocent passengers on flight 752 of Ukraine airline? Was the Iranian sky closed to all European flights? Did the Europeans cancel their political and economic relations with the Islamic Republic of Iran?

The answer to this question is very simple. Not only they did not do so, but they rolled out the red carpet for the Islamic Republic’s representatives and, as they say, mediated the negotiations between Tehran and Washington to revive a deadly agreement that would hand over billions of dollars to a regime that is the world’s number one terrorist sponsor. These negotiations are currently taking place in the heart of Europe, Austria.

In another example, we can mention the bloody massacre of Iranian protesters in Bloody November by the murderers of the Islamic Republic. On December 23, 2019, Reuters reported in an exclusive report, citing government sources in Iran, that more than 1,500 people had been killed during the November protests, as well as a direct order from Khamenei to end the protests “in any way possible”, including mass killings.

Earlier, in December 2017, the same thing happened as in November 2019, but on a smaller scale.

On January 14, 2018, the UN Security Council convened a meeting at the request of the United States to discuss the ongoing unrest in those days. The meeting, however, ended with criticism from Russia, China and European countries of Ms. Nikki Haley, the then US representative to the Security Council, for raising the issue in the Security Council.

The meeting, which was convened on Friday evening (January 5, 2018 – at the request of Ms. Nikki Haley, US Permanent Ambassador to the United Nations in New York), began with Ms. Nikki Haley’s remarks, but minutes before the meeting began, Russia during a sharp stance, accused Washington of “shamelessly interfering in Iran’s internal affairs.”.

Ms. Nikki Haley, said that in 2009 the world did not support the protesters in Iran, but this time the United States will stand by the Iranian people.

She said; “In 2009, when the Iranian hope was suppressed by their government, the world stood still and looked at it passively. In 2018, we will not be silent. Once again, the Iranian people have risen. They are after Human rights and fundamental freedoms. They are asking for our help.”

After Ms. Nikki Haley, the French envoy spoke out and implied that the protests were an internal matter and that global security could not be addressed by the UN Security Council, as global security was not threatened.

The United Nations followed the same procedure in the bloody massacre of November 1998, and the UN High Commissioner for Human Rights, Michelle Bachelet, issued only one statement in this regard, which was on December 6, 2019.

Ms. Michelle Bachelet, for whom the lives of 1,500 people killed in November or even 176 passengers on Flight 752 has been worth nothing more than a statement in recent days, but her sense of humanity has blossomed and she said in a speech at the United Nations that Israeli attacks on Gaza may be a war crime.

Ms. Bachelet, said on Thursday My 27, 2021, that Israeli airstrikes on the Gaza Strip in response to Hamas rocket fire into Israel in defence of Israeli citizens could be war crimes.

I request clarification to my questions from Ms. Michelle Bachelet?

All your misguided criticism of Israel is only propaganda and indirect support for terrorist groups. There is a war going on against Jews, not only as missile attacks from Gaza against Israel, but also by anti-Semitic groups and left-wing politicians such as Ilhan Omar, Rashida Tlaib and Alexandria Ocasio-Gortez in the United States and Europe. You are not alone in wanting to influence the world for unrest, especially in the Middle East. Your anti-Israel mindset exists in many countries.

Ms. Mitchell Bachelet, you are a false propaganda machine the same as the left-wing media that indoctrinates people and encourages them to demonstrate against Israel.

You are hiding behind the name of human rights in the UN and have no legal basis for your claims.