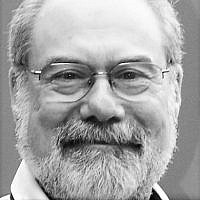 The Blogs
Max Hampel
Apply for a Blog
Please note that the posts on The Blogs are contributed by third parties. The opinions, facts and any media content in them are presented solely by the authors, and neither The Times of Israel nor its partners assume any responsibility for them. Please contact us in case of abuse. In case of abuse,
Report this post.

Recently, Rabbi Yigal Levenstein (head of a pre-military academy in Eli) referred to gay people as “perverts” and Reform Judaism as a branch of Christianity. Then naturally he trots out the usual bull tish that his comments were “misinterpreted”. However, the rabbi did not apologize or retract his remarks.

Do people ever take responsibility for their words and actions anymore?

Doesn’t the good rabbi (and don’t many others) realize that a pile of fresh cow-dung will still smell the same even if I call it a rose?

Let’s look at the logic used: I say that 1 + 1 = 3.5 but my equation was misinterpreted because what I really meant was (and you should have realized) that 1 + 1 = 2.5 which is pretty close to your equation of 1 + 1 = 2. The logic is based on my supreme conviction that these equations are all open to interpretation.

Levenstein said his speech had been intended as a protest at what he saw as “an attempt to drag the IDF into a war of opinions raging in society in relation to a variety of issues, including attitudes to the family structure in the Jewish people,” in which he said there was “a gaping chasm” between a liberal world view and the path of the Torah.

Rabbi Levenstein’s comments come at a time when the newly promoted Chief Rabbi of the IDF, Col. Eyal Karim, has had previous pronouncements questioned.

Interpreting Jewish law, Karim pronounced that IDF soldiers are allowed to rape gentile women during wartime, called gays “maimed human beings” and stated that women are sentimental creatures who need to be “in their husbands’ possession.” The rabbi also opposed the drafting of women into the IDF and to women singing in front of men in the IDF, according to the rabbinical principle of “a woman’s voice is sexually enticing.” (I’ve heard some Imams express the same philosophy, because these religious leaders haven’t heard of self-control.)

Sadly, for the rabbi, some of the best renditions of “Yerushalayim Shel Zahav” aren’t “sexually enticing,” but are definitely sung by women!

Of course Rabbi Karim also sings the usual trope, namely, his words were misinterpreted. It would be nice to have just a penny every time somebody cries ‘foul’ – I’ve been misinterpreted! From the number of misrepresentations, I would be truly wealthy.

Some people understand the value of inclusiveness. Rabbi Hillel the Elder’s answered the gentile who said to him: “Convert me on the condition that you teach me the whole Torah while I stand on one foot.” as follows “That which is despicable to you, do not do to your fellow, this is the whole Torah, and the rest is commentary, go and learn it.” – Babylonian Talmud, Shabbat 31a. Rabbis Levenstein and Karim probably descend from the long forgotten school of Rabbi Shammai who pushed the same gentile aside.

The Israeli founding fathers understood the critical importance of the IDF. Yes, it had to be the self-defence mechanism to protect Medinat Yisrael and Am Yisrael, but also (and equally importantly) it became the melting pot that allowed diversity to give synergistic strength to those who emerged. The nation rose up with that added strength.
I am constantly on the lookout for people with wisdom and compassion towards their fellow man. I want them to be my teachers and role-models. If I have learnt anything so far in life, it is that young children learn 50% of the good that you do as a parent, and copy 100% of the bad.

In summary, Levenstein said that his criticism stemmed from a “loving but pained heart,” adding that sometimes “fierce criticism” comes from caring; so the good Rabbis, Levenstein and Karim, will understand my “caring” sentiments, when I wish for them big bunches of roses.

About the Author
As a Jewish husband, father, and grandfather, vitally concerned with the continuity of the Jewish people, I wish to address issues affecting that continuity as I see them, from time to time, and to acknowledge our place in the continuum of Jewish history.
Related Topics
Related Posts
Comments