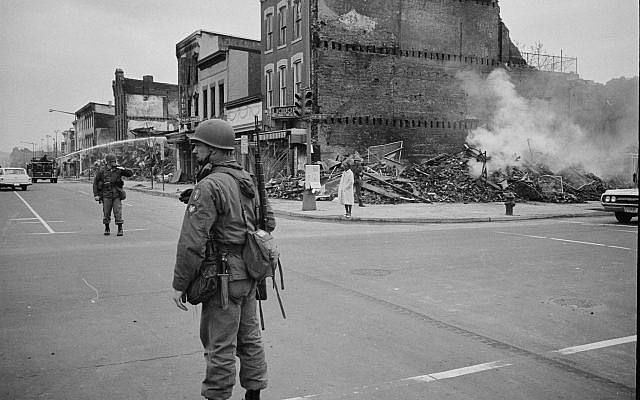 Have a close look, this was after the riots in 1968 over MLK. What has changed? (Wikimedia commons, Warren K Leffler, 1968).

We all know that song by Louis Armstrong, and it strikes me of how far away we are from his precious lyrics. There is a “newer” song by the Black Eyed Peas with “Where is the love?” which kind of describes some things we are going through in this world at this moment.

But I have no hope of erasing evil, cruelty, injustice and inequality by blogging here. That time has long gone. For me it’s more about therapeutic writing in a way – I let my steam off and I let the internet trolls go bananas and I let them succumb in their own waste of time and effort.

Nothing can change me for standing up against racism, misogynism, inequality or pure evil. Therefore I have compiled a list of how to make the world a bit better, from my point of view.

End the racism against immigrants, foreigners, people of color or anyone who faces it. It does not have to be that hard – treat anyone you meet as you wish to be treated. Don’t accept the terminology of polarization or “It has always been like this and nothing will change”.

Please, dear citizens of the US – don’t keep Trump in the White House for another term. I could go on forever about this, what other president in the US of A has ever gotten away with all his racist bigotry? Trump’s last black aidee in the administration just resigned a few days ago for his way of handling the demonstrations and riots. Here is a link of some things the Donald has said so far.

Produce a vaccine for Corona now. That would rock.

Stop admiring autocracies. Poland and Hungary are its latest victims and it’s just terrible. Countries who longed for independence and democracy since 1945 are now playing in the same rotten league as its former power-house – Russia.

Don’t accept Netanyahu’s divisive agenda. He even said it himself, “The more I lash out against the arabs, the higher voter turnout from them. It’s better to just be quiet.”. He is on his 5th (!) term serving as the Prime Minister of Israel. If anyone would be compelled – please fill me in on how the general discourse and polarization was in the year 1999 versus 2020.

Rebuke Fatah and it’s new alliance with Hamas. Fatah is done – they have no clear agenda whatsoever and have not been constructive since they turned down what Barak and Olmert offered them back in the days. Fatah keeps paying pensions to terrorists. Hamas keeps terrorizing Gaza and it’s surroundings. There is a new generation of Arab Palestinians – reach out to them instead.

End a 53-year old occupation of the West Bank. Just because you might be Israeli, pro-Israeli or whatever you label yourself – we have to come to terms with that we as Israelis can’t continue occupying the West Bank. Judea and Samaria. Palestine. Whatever you want to call it. It has to end if Israel wishes to progress and advance further in any international arena. And we as Israelis who claim that we are the only democracy in the Middle East continue this oppression – it just doesn’t make sense.

Russia has annexated the Crimea, many countries do lay claim on lands. But since when has annexation ever lasted in the long-run? It might be a solution for a select few groups right now, but it won’t set things straight.

End the wars in Yemen, Syria, Afghanistan and denounce the countries supporting either faction. Just stop.

Re-unite North- and South Korea into one. The Kim’s, (Not Kardashians) has terrorized their population all too long.

End the “War on drugs”. You can’t wage war upon civilians – and the civilians should not be forced to be engaged, participate or produce drugs. Even less consuming them, but drug-related crime and the number of deaths around the world is staggering and eclipses most wars in modern time. Time to take a new approach.

Support people in dire need. Don’t turn them away – even those who have screwed up needs your help. See it as a long-term commitment to lasting solutions. It can be your friend, the homeless people in your city or the refugee without any rights at all. You can always do more.

Don’t throw people out of their homes. This is a common practice by JNF in East Jerusalem. Let people, whoever they are – live where they live. Let the settlers stay. Let the East Jerusalemites stay. Stop land-grabbing and aggression on all sides from now on.

Finally, be a Mensch.