There was a lot of noise as Kabul – and democracy – fell in Afghanistan. The cheers of Taliban militants taking over the streets, the horns of hundreds of cars fleeing out of the city, the cacophony of thousands of soon-to-be refugees rushing to the airport, climbing on top of American aircraft, and falling to their death in hopes of an escape.

And then, there was a deafening silence. While every American commentator, politician, or person with a Twitter account was reacting in horror to the loss of significant freedoms for Afghani people, the progressive arm of Congress or “The Squad” took the weekend off. Statements condemning the Taliban takeover didn’t come from Representatives Jamaal Bowman, Cori Bush, Ilhan Omar, Alexandria Ocasio Cortez, or even the most moderate of the group, Ayanna Pressley until days after the country fell.

AOC, who often takes up the most limelight in the group, did not express her dismay at the rise of a violent extremist group seizing a country of 38 million. The social media star, who regularly tweets daily, waited three days after Kabul fell to issue any statement.

“For all those who lost, sacrificed, suffered, and served in the last 20 years of war and occupation, the United States has a singular responsibility in extending safe refuge to the Afghan people,” she wrote to her 12 million followers. Her official government account issued a similar statement, with no condemnation of the Taliban.

Perhaps there would be more urgency from Ilhan Omar – who herself survived war much alike that in Afghanistan? No, she too stayed silent until August 16th, the collective choice by the progressive arm of Congress.

This lack of energy and outrage about an emergency human rights crisis is disturbing, especially considering how much airtime these congresswomen have given to attacking Israel. During the outbreak of violence over the real estate dispute over one neighborhood in Jerusalem, Ocasio-Cortez tweeted about the conflict not just once but six times. Does a month-long conflict of one of America’s allies deserve six times the attention of the violent overthrow of a nation the United States has invested over $1 trillion and 20 years of military deployments?

Now, I understand that the response from government officials has to be proportional to the matter at hand – and each politician has their own values. However, I could not imagine a more significant threat to the progressive values these Democratic socialists claim to uphold than the Taliban.

For the Taliban, human or civil rights are non-existent. When the group first ruled Afghanistan from 1992 to 2001, it became known for violence against those that do not follow its narrow interpretation of the Quran, enforcing religious law through brutal public punishments, including floggings, amputations, and mass executions of those with other religious beliefs. The group destroyed ancient relics such as the Buddhas of Bamiyan. They banned music in any capacity. But the primary victims of their reign of terror are women and girls, who were barred from most jobs or school, forbidden to leave home without covering their faces or to be in company with men they were not related or married to. Life under the Taliban for women is like living under house arrest, with capital punishment if you dare to break it. 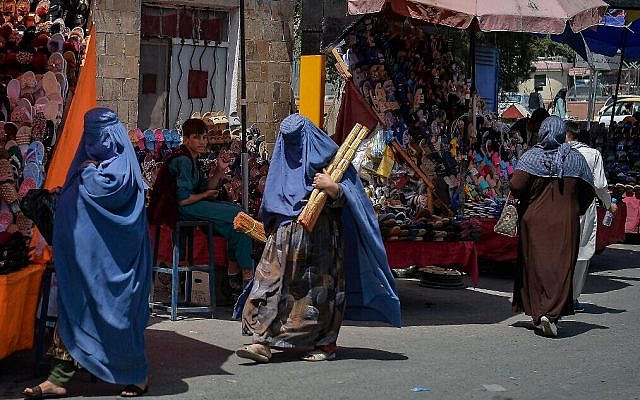 Given that there are only two Muslim women in Congress, and both are in the Squad, bigots often insinuate that their eery silence on the resurgence of the Taliban is due to loyalties they have with fundamentalist Islam or terrorists. I reject that characterization wholeheartedly. They are merely part of a greater double standard taking place on the left toward Israel. Gone are the days of narrative-based infographics, TikToks, and impassioned floor speeches, as an infant democracy crumbles before our very eyes. Instead of calls for action like those wielded at Israel, a video of the Taliban dancing to a Drake song went viral. It begs the question: why are these internet activists missing in action?

The outsized focus on Israel in the media, which is driven by antisemitism, is one factor. Another is that is after months of calling for sympathy and refusing to condemn Hamas’ attacks on Israel fully; it’s not so easy to denounce the Taliban. Both terrorist groups operate in the same way. They use civilians as human shields and store weapons caches in schools, hospitals, and mosques. Like the American-led coalition in Afghanistan, Israel adapted its counterterrorism strategy to minimize the harm to civilians. The Israeli Defense Forces go even further, literally calling the homes of civilians near targets to warn of imminent military action whenever possible.

Hamas and the Taliban share more than military strategy. They hold the same illiberal views on Jews, women, and the LGBTQ community. Those who hate the Jewish people whitewash the horrors of Hamas because they will cheer for any adversary of Israel, no matter how inhumane, as antisemitism and anti-Zionism have been rebranded as the ultimate progressive cause. That’s not to say the Israeli government is perfect, especially to someone left-wing, as the government has turned right for a long time. However, it is in spades more inclusive and more respectful of human rights than Hamas, or at this moment, the Taliban.

I welcome valid criticism of the Israeli government and its policies. But when activists and political leaders have endless energy to hound Israel but no words for the Taliban, it reveals a sinister double standard to calling out the values they claim to hold dear.

The Squad’s days-long silence after the Taliban took over Afghanistan is the loudest statement they’ve ever made. The activist world’s hypocrisy in addressing Israel versus gruesome, illiberal groups suggests it was never about human rights; it was always about hating Jews.