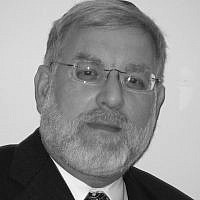 The Blogs
Pesach Lerner
Apply for a Blog
Advertisement
Please note that the posts on The Blogs are contributed by third parties. The opinions, facts and any media content in them are presented solely by the authors, and neither The Times of Israel nor its partners assume any responsibility for them. Please contact us in case of abuse. In case of abuse,
Report this post.

When Israel’s Minister of Religious Affairs, David Azoulay, recently appeared on Galei Zahal Radio to address Jewish conversion and religious standards in Israel, media and political figures picked up on a half quote found within a small segment of his interview, and had a field day. “Reform Jews aren’t Jews,” blared the headlines — never mind that he said otherwise, repeatedly, in that same segment.

Why ignore the context, content, and intent of his remarks? The American Reform Movement is pressuring Israel to change its religious standards to match their own; MK Azoulay was responding to this pressure. He said that Reform Jews aren’t simply Jews, but Jews who erred. They have strayed from the path of Torah, he explained, and he implied that they are at risk: “We must truly be concerned that every Jew returns to the lap of Judaism, and we will receive everyone with love.” Every Jew is welcome — but American Reform standards, he maintained, don’t belong in Israel.

This is not, as some might wish to believe, Azoulay’s opinion because he is an Orthodox Rabbi. It is simply because Azoulay is an Israeli.

Israel’s current President, Ruby Rivlin, was a Likud MK in 1997 when Reform Rabbi Uri Regev brought him to the United States to learn more about American Jewry. Upon his return, he told the Israeli media that “as a Jew who does not observe 613 commandments and perhaps not even 13 commandments, I was deeply shocked…Any connection between [Reform] and Judaism didn’t approach reality. I felt as if I were in a church.”

The Reform movement claims that more Israelis would be involved with Judaism if Reform were given greater recognition — but the evidence suggests otherwise. According to periodic studies by the Guttman Center, Israelis are increasing their attachment to Jewish tradition and religion — while the Pew Forum survey shows just the opposite happening in America, and especially within Reform.

Despite a massive influx of immigrants from the former Soviet Union, 75% of whom define themselves as secular, Israel’s Jewish population remains evenly divided between those who classify themselves as “secular” and those who call themselves “traditional” or “Orthodox.” And that statistic uses a definition of “secular” that would surprise any American.

Only 17% of Israelis consider themselves fully non-observant, while two-thirds of “secular” Israelis are in reality “somewhat observant” or even “very” observant. According to the Guttman Center’s recent surveys, “a vast majority of secular Jews observe certain aspects of Jewish tradition (eat kosher food, refrain from driving on Shabbat, fast on Yom-Kippur, not eat chametz on Pesach, light Chanukah candles, etc.).”

Most critically for the future of Judaism, Israel’s younger generation evidences a far greater attachment to Judaism than previous ones. Whereas 68% of Israelis over 60 are secular and just 24% are traditional, only 37% of adults under 30 are secular while 31% are traditional. And this is besides the phenomenal growth of the Orthodox population — which has reached 32%, nearly one-third of all young adults.

In every one of these key metrics, American Reform Judaism is sadly moving in the opposite direction. Just over 50% of Reform Jews reported to the Pew Forum that they fasted for even part of Yom Kippur; only 10% “always” or “usually” light Sabbath candles, and just 7% keep kosher at home. And these are merely symptoms of a much deeper problem.

In contrast to the marked increase in the affiliation of younger Israelis, American Reform Jewish involvement is in free fall. Just 7% of elderly American Jews identify themselves as secular, as “Jews of no religion” — but nearly one-third of the youngest generation, the “millenials,” describe themselves as such. Reform rabbis claim to represent the largest American Jewish movement, but only 14% of American Jewish adults are actually members of their temples — and that percentage is declining rapidly.

Asked what it means to be Jewish, American Reform Jews are vastly more likely to identify “remembering the Holocaust” or even “being intellectually curious” than to reference Jewish observances or practices. Fully half of Reform Jews who are married at all are married to non-Jews — and despite decades of increasingly desperate efforts to welcome intermarried families into their temples, children of intermarriage remain much less likely to be affiliated with Judaism.

And it’s not as if Reform leaders are doing much better themselves. The demand for “inclusion” has led inexorably towards the endorsement of intermarried rabbis — no one expects the movement to hold out even another decade. And that’s not the only Jewish standard of marriage to be jettisoned in recent years: the movement openly supported and celebrated the recent Supreme Court decision endorsing same-gender marriage.

Regardless of one’s personal opinion or level of religiosity, no one can claim that Reform maintains even its own version of Jewish standards when the prevailing wind changes direction. The positions of Reform Judaism are those which today’s Central Conference of American Rabbis say they are, never mind what was said a generation ago. So what American Reform leaders are demanding of Israel is not simply that they accept Reform positions of today, but that Israel pre-approve, carte blanche, whatever Reform positions will be in decades to come.

In a recent interview, former Israeli Ambassador to the United States Michael Oren commented that “when you look at the Pew Report you see that the rate of assimilation among non-Orthodox Jews is massive, but at the same time, the Orthodox community is growing very fast. So the Jewish community in America might be smaller 30 to 40 years from now, but it will be more connected religiously and probably more connected to Israel.”

The Reform Movement was an unprecedented social experiment upon the Jewish people. Reform leaders claimed that the Jews could abandon the path of Torah, abandon the code of conduct that has set us apart for thousands of years, and remain Jewish. In America, this experiment has proven itself a failure of historic proportions. And at the same time, in Israel, where even secular Jews recognize the traditional definitions of Judaism, observance and attachment to Judaism are increasing rapidly.

For all his undiplomatic language, MK Azoulay had it right. Reform Judaism in America has had no great positive impact on Jewish continuity; in actuality, the evidence indicates the opposite. Reform Judaism is collapsing in the United States; the worst thing Israel could do to the integrity and continuity of the Jewish people is to import that failed model at this critical time.

About the Author
Rabbi Pesach Lerner is Executive Vice President Emeritus of the National Council of Young Israel, the parent organization of all Young Israel Orthodox Synagogues. He is President of Coalition for Jewish Values, Founder and Chairman of the Eretz Hakodesh party in the World Zionist Organization, and a member of the Board of Governors of the Jewish Agency for Israel
Related Topics
Related Posts
Comments