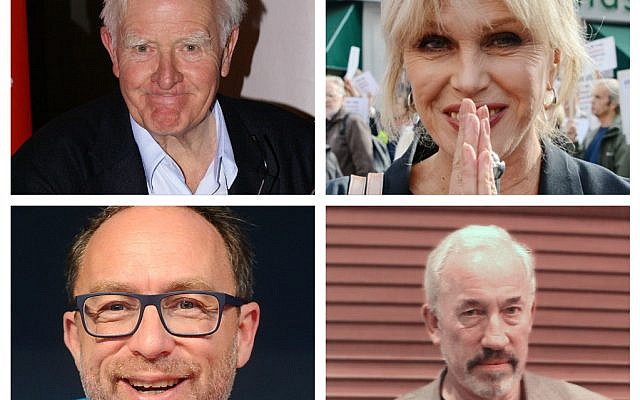 I like to think I’m a fairly loyal citizen who, on the whole, pretty much falls in with the civic norms of British society. These include: wearing a poppy during the run-up to Remembrance Day, observing the silence on the day itself.

Respect for one’s elders (though they are not necessarily one’s betters). Co-operating with the police, obeying the law, and enjoying some of the quintessential looniness of Britain: its passion for sport, even if the national teams don’t win very much, and we are always surprised when they do; generally agreeing that the Queen is a Good Thing, although the less that can be sa id about some other members of the royal family, probably the better; loving the off-the-wall innovation of our top comedians, writers and artists, and taking full advantage of British arts and sciences.

In this space, on too many occasions, I have been taken aback at some of the views voiced, all too frequently anonymously, about Jews. They are views which singularly fail to take into account the incredible contribution we have made, and continue to make. From our ranks we have produced brave servicemen and women — British Jews who fought and still fight for this country. And that’s one of the reasons that I’m proud to wear a poppy.

Our immigrants — Jews who came to Britain on the Kindertransport, or as unlikely domestic servants on the eve of the war — hugely contributed to this society.

Our sons and daughters have become groundbreakers and pioneers in every walk of life, from engineers and scientists to law lords and politicians. We work in the arts, in the media, in education, in health. We have helped to make and shape Britain, from its human rights policies to its anti-racism laws.

And yet… for some people, it’s not good enough. Last week, in the throes of yet another impassioned debate as to why Jews might not feel ready to vote for Jeremy Corbyn, I read one serpentine comment. The person suggested that if Jews were really concerned with the good of the country, they would vote for Corbyn. The natural logic of this is that Jews who cannot bring themselves to do that, don’t want the best for Britain. Leaving aside the bizarre deduction that only Corbyn and his cult know what is best for Britain, I found this comment frightening. Because if Jews can be held not to want the best for Britain, the next step is to regard us as inimical to our society. Dangerous and hateful ideology — and nowhere near the truth.

So how wonderful, then, to see last week’s letter in the Guardian from 24 well-known people, ranging from writer John Le Carre to actor Joanna Lumley, declaring that they, too, can’t bring themselves to vote for Corbyn.

They wrote: “Antisemitism is central to a wider debate about the kind of country we want to be. To ignore it because Brexit looms larger is to declare that anti-Jewish prejudice is a price worth paying for a Labour government. Which other community’s concerns are disposable in this way? Who would be next?”

I don’t know who organised this letter, but personally, I can’t thank them enough.

That’s what being British is about.