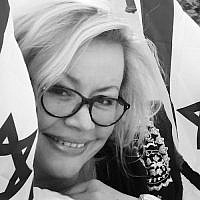 The Blogs
Tanya Hajek
Host of Niagara to Israel with Love Celebrations
Apply for a Blog
Advertisement
Please note that the posts on The Blogs are contributed by third parties. The opinions, facts and any media content in them are presented solely by the authors, and neither The Times of Israel nor its partners assume any responsibility for them. Please contact us in case of abuse. In case of abuse,
Report this post.

You are about to find that out very soon… 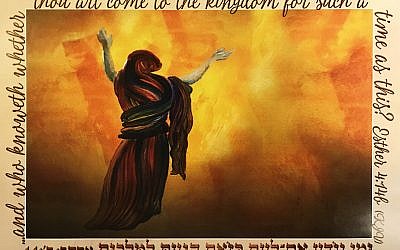 What does Queen Esther have to do with Mossad Spies? More than you think…
While pacing the streets of Jerusalem, chasing our super-fast Tour guide who kept quickly disappearing from our sight around the corners, up and down steep hills & countless stairs, my 10-year old turned to me suddenly with that “A-HA” moment:
– Mom!! I FINALLY figured out WHO is our Tour Guide!!
– Really? Who?
– She-is-a-MOSSAD SPY!! – blurted out my thrilled little princess, so proud of her discovery of the Century.
– WOW, how do you know?! – I did my best to stay serious.
– You see how sneaky she is? Quickly disappears, hides around the corners, talks to the secret mic, listens to directives via ear-buds! Then SUDDENLY she appears again like nothing happens! HA! I am not stupid! She-works-for-MOSSAD! – my girl declared victoriously (never mind the fact that we ALL have the same mics & ear-buds as a Tour group!)

– I am surprised you did ’cause you so much love Mossad spies, but you see, here is my secret! – she leaned against me, whispering into my ear, watching cautiously over her shoulders: I-WILL-BE-Mossad-spy- when I grow up. I am in training now, but shushhh, don’t tell anyone – she winked at me with great importance.
– Don’t worry Nina Hajek, I won’t tell anybody that you are Mossad spy in training!
OK, Tanya, that was funny, but what does that “Mossad story” have to do with Golan Heights and Purim? Glad you asked – everything. Keep reading! 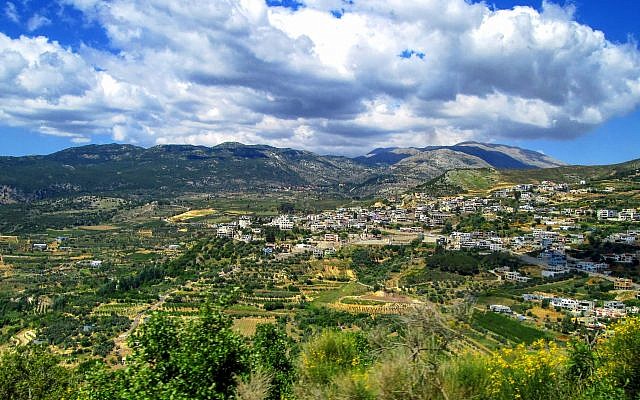 If you know me a bit, you already heard that Golan Heights stole my heart. Can’t help but cry every time I mention the name…
It was April 2018. Nothing, like mid-spring in the Golan… I can still feel the fresh, cutting, mountain breeze in my hair and on my cheeks, drying off the tears… as I was amazed watching countless vineyards, orchards and gardens springing forth from the rough, rocky mountaintops! For a passionate gardener, lover of vineyards and orchards like myself, this was a breathtaking sight!
Hard working, sacrificial, pioneering Israeli hands have reached the unreachable and cultivated untouchable. Spreading life and multiplication all around, causing the land to sing under their loving care and at the same time, cry for mercy soaked with precious Jewish blood, including that of Mossad Spy Eli Cohen. Brave Israeli hero, who paid the ultimate price defending the Land, providing priceless intelligence to Israel. You might say, I see Mossad connection to Golan, but how does the Purim fit in? You are in a good place, stay tuned! 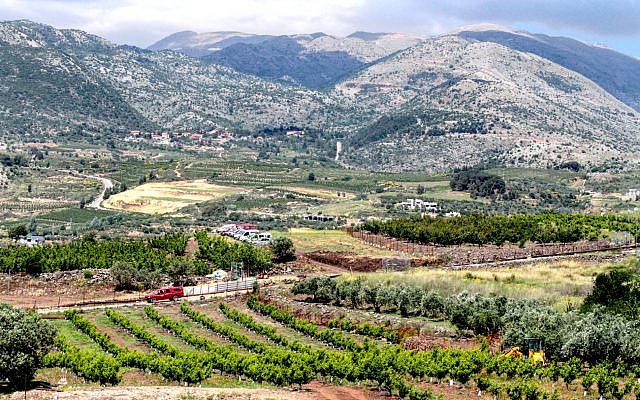 I was amazed watching countless vineyards, orchards and gardens springing forth from the rough, rocky mountaintops…

Seeing with my own eyes IDF tank from 1973 Yom Kippur War, still standing on that ground – indescribable experience. Touching it with my own hands caused my heart to beat inside my head. Climbing up that tank was just surreal and sobering… I hesitated. Feeling unworthy of the heavy sacrifice it represents. Countless precious young Jewish lives – Valley of Tears battle. Almost entire generation of young Israeli men lost their lives defending their nation and land. Almost entire generation of Israeli women remained unmarried…

This tank still keeps their memory inside… Whispering in the wind the story of true bravery and patriotism. The wind listens. It blows the story around the world and swirls it up to Heaven. The clouds hear it. They break down sobbing. The rain of tears soaks the Land and make it blossom. Nothing, like mid-spring in the Golan… Their memory will never be forgotten. It will be a blessing forever. Heaven and earth are their faithful witness. 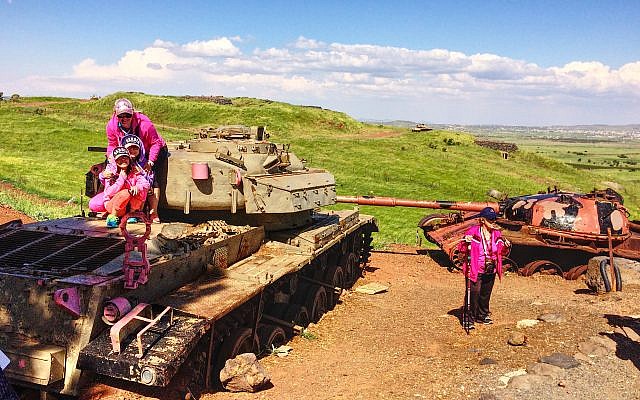 IDF tank from 1973 Yom Kippur War in the Valley of Tears – Golan Heights
Praying and sending blessings to Syria with my Evangelical Mishpochah on the Israeli-Syrian border, in a real-time while the ugly war is still raging over there – was a God-thing to do! But then – El Rom Kibbutz Studio and their latest movie about Valley of Tears battle! A stunning story about yet another Israeli hero Avigdor Kahalani – total meltdown…
The Purim, Tanya, the Purim!? Trust me, it is closer than you think, just bear with me, please. 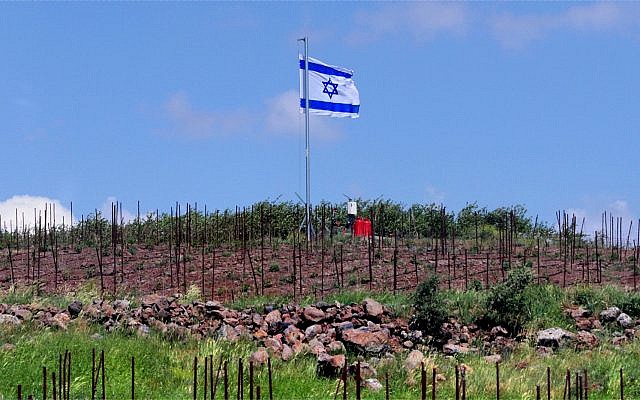 UNTIL the Land felt Jewish hard-working, sacrificial pioneering hands. Just then it sprang up with new life and new wine! The windows of heaven opened giving early and latter rain, pouring down the blessing of Adonai. Desolate places turned into nurseries, vineyards, orchards and gardens at the command of the Lord. Because HIS own people returned to HIS own Land – their ONLY Land! 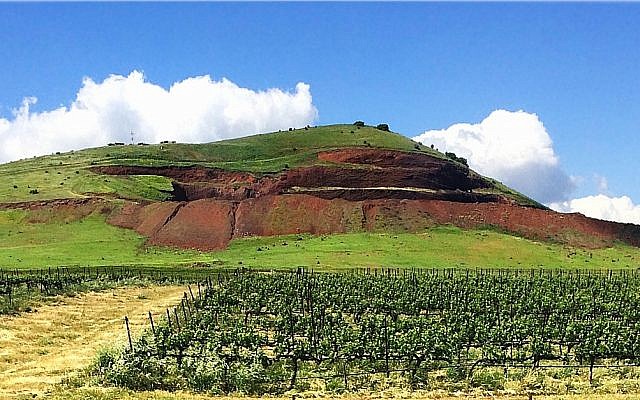 Desolate places turned into nurseries, vineyards, orchards and gardens at the command of the Lord.

The Land started singing praises to her Creator, giving the fruit to her own people – the Chosen People of our God – to the Jews (first and then to the Gentiles). Praised be the name of Adonai!!

I just wanted to stay there… to see at least one Sunset and Sunrise above Golan… To breathe in the life and silent cry of the ages passed that was surrounding me. But we had to go…

Golan Heights, you stole my heart… 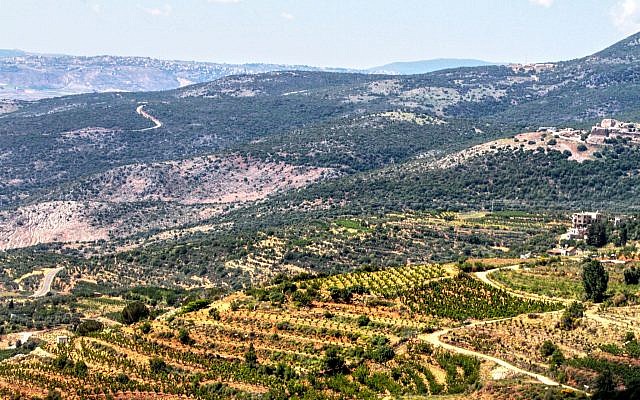 Fast forward one year. Now, THIS is where it gets really intriguing! In the light of President Trump’s announcement – US recognition of Golan as a legitimate part of the State of Israel – how significant is the fact that Eli Cohen’s wrist-watch was found and redeemed from Syria last summer by amazing Mossad spies, after being lost for 54 years(!?)

Get this: wrist-watch of a Mossad spy who provided intelligence for taking over Golan, found and redeemed from enemies’ grip, after being lost for a long time. What IF this was a SIGN from the Lord? What IF He is trying to say something? Like: watch, enough time was lost. WATCH, the TIME has COME (watch came back to Israel!) for the Golan to be recognized! WATCH, the time that was lost is now found – NOW is the TIME! Watch and take courage in taking recognition of the Golan! As Eli did in his time (marking enemies’ camps on Golan so IDF can recognize them!) Watch, HIS TIME has now MET YOUR TIME. It is time (watch) to finish what Eli’s hand (wrist-watch) started. 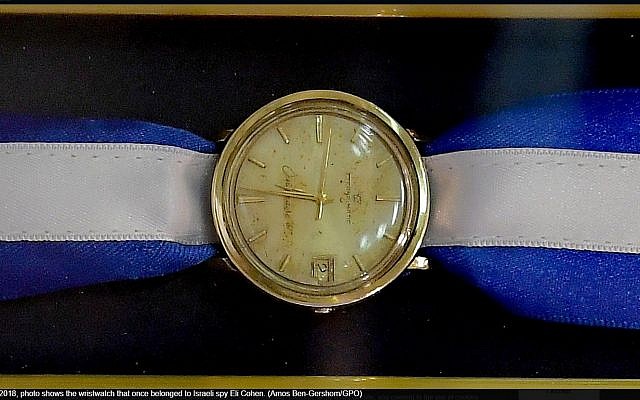 Photo shows the wristwatch that once belonged to Israeli spy Eli Cohen. (Amos Ben-Gershom/GPO)
So, what do Purim and Golan have in common with Mossad spies? EVERYTHING. What about President Trump’s announcement – recognizing Golan exactly on – Purim?! Coincidence? Hardly. HaShem rules and reigns over the times and seasons. This is non-other then Israel’s modern-day miracle of the Lord and blessing of Purim for SUCH A TIME AS THIS.
Mossad spy Eli Cohen walked step by step in – Esther’s anointing! He was brought into enemies’ Government in order to help save his own Jewish people. His Jewish identity was hidden until the last moment. He courageously followed Esther’s example till the very end – if I perish, I perish. And perish he did. That is the only difference between Queen Esther and him. She survived. He paid the ultimate price. BUT, they both fulfilled their divine calling, purpose and destiny for such a time as this. They were chosen to save God’s Chosen People. And they did.
So WHAT if the nations would not agree with recognition of Golan? Have they agreed in 1948? Have they agreed in 1967 and 1973? Have they agreed in 2018? Does HaShem need approval from the nations? Is not HaShem the One who governs the world, the Universe and sets up the times and seasons? The time is in HIS hand. Watch, the time for taking over Golan from enemies’ grip was redeemed! Go in the name of HaShem!!
The Times of Israel are in HIS hands forevermore…
About the Author
Tanya Hajek is a writer, Real Estate Investor, Evangelical Zionist, Jewish-Christian Communities bridge builder. She organized and hosted the most extravagant celebration of Israel’s 70th in Canada (City/Government officials, Israeli Consul General & Economic Attaché present) with glorious 7-min fireworks for Israel’s 7 decades above Niagara Falls and illuminated the Falls in honour of Israel’s national flag for the 1st time in history. Born only 30 miles from historic Pranjani Airport where brave Serbian villagers rescued over 500 US Airmen during WWII; continuously living on borders (Serbian-Croatian; Slovak-Austrian and US-CAN), holding triple citizenship & speaking 4 languages, being a natural bridge-builder is who she is. As a grandchild of a Holocaust survivor, passion to see the nations of the world coming to the realization of the importance of favouring Zion is in her DNA. Tanya Hajek answers the call of raising up 21st Century Esther’s Army.
Related Topics
Related Posts
Tanya Hajek
Comments