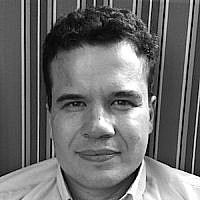 The Blogs
Rafael Castro
Apply for a Blog
Advertisement
Please note that the posts on The Blogs are contributed by third parties. The opinions, facts and any media content in them are presented solely by the authors, and neither The Times of Israel nor its partners assume any responsibility for them. Please contact us in case of abuse. In case of abuse,
Report this post.

Woody Allen characters and Israelis are among the world’s most well-known Jews. Whereas the New York City Jews which Woody Allen portrays delight hundreds of millions of viewers worldwide, Israelis tend to irk public opinion.

The Jewish characters Woody Allen portrays are ugly, clumsy and nerdy. Israelis, according to the hasbara image, are pioneers in medicine and science protected by attractive soldiers and an invincible secret service. We are understandably frustrated that these Israeli accomplishments are not universally admired. We are right. But self-righteousness will not win us the sympathies of those who do not appreciate Israel.

Woody Allen characters are appreciated because they are both admirably brilliant and pitifully neurotic. Unlike the stereotypical Jewish professionals living in Manhattan, Woody Allen characters are not successful. Their sole achievements are eluding overbearing (Jewish) mothers, anti-Semitic in-laws, and flirting with sophisticated, but complicated Gentile women. In other words, very few of us have watched Woody Allen comedies and felt an inferiority complex vis-à-vis their main character.

Survey after survey tracking anti-Semitic opinions around the world reveal a pattern: Jews are repeatedly viewed by millions of people as too wealthy, too influential and too powerful. In other words, the success of Jews grates.

Most American Jews are oblivious to this reality, because America is one of the world’s very few countries with a meritocratic ethos. The American Dream has been a reality for a disproportionate number of Jewish Americans. And since most Americans identify wealth and success with positive character traits, the Jewish community enjoys unparalleled prestige in America.

Unfortunately the world is not America. In many of the world’s societies, wealth and power are associated with dishonesty and ruthlessness. The fact Jews throughout the world are very well represented in the world’s elites often works against — not for — the good reputation of Jews.

It is therefore unremarkable that Jews are viewed with suspicion and hostility in leftist and minority milieus which view the powerful as oppressors. And also in regions such as Latin America, Southern & Eastern Europe where wealth and power have historically been acquired via abuses. In circles and cultures that believe that wealth and power are inherently unjust, the large number of successful Jews simply strengthens anti-Semitic tropes and canards.

During the last three decades, Israel’s achievements in the fields of science, medicine and technology have been remarkable. Yet these accomplishments have barely made a dent in the unpopularity of the Jewish State among broad swathes of world public opinion. It is unlikely that peddling such accomplishments more aggressively will do much good.

The truth is that tens of millions of people around the world do not want to be reminded how smart and successful Jews are in Israel too. This attitude may strike us as inherently anti-Semitic. Yet it is not necessarily so. Few people genuinely admired the top pupil in their school. Envy is a human, all too human trait.

Zionism needs a Woody Allen moment. Hasbara needs a message that portrays Israel as what it really is: a uniquely chaotic and irreverent society that is both flawed and touchingly human.  The Israeli TV series HaYehudim Baim (Hebrew for “The Jews are Coming”) for example, provides highly intelligent and self-ironic insights into Jewish history dating from the patriarch Abraham up to the 21st century. The wannabe social media page of the Mossad also earned kudos for its hilarious remarks about Middle Eastern politics.

After admiring the invincible Israeli Wonder Woman Gal Gadot, the world deserves to enjoy the lighthearted and self-ironic side of the Jewish state. We need a Hasbara approach that makes us smile and laugh, since it is much harder to hate people who are funny. We need to endear Israelis to the world, by portraying their foibles as effectively as Woody Allen portrayed the foibles of New York Jews. Humor is a weapon that Zionism urgently needs to deploy.

About the Author
Rafael Castro was born in Italy and earned a degree in Economics at Yale and a masters degree in Political Science at Hebrew University. In addition to working in the development aid sector, he has years of experience in the German IT industry and has written op-eds for over 5 years at YNET.
Related Topics
Related Posts
Comments