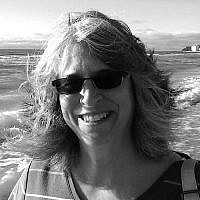 The Blogs
Liz Wagner
Apply for a Blog
Please note that the posts on The Blogs are contributed by third parties. The opinions, facts and any media content in them are presented solely by the authors, and neither The Times of Israel nor its partners assume any responsibility for them. Please contact us in case of abuse. In case of abuse,
Report this post.

The other day, I came across a page on Joe Biden’s campaign website devoted to the Jewish community. To this Jewish American, it was canned product: America and Israel have an “unbreakable” bond; he’ll ensure Israel has the qualitative edge over its enemies when it comes to military weapons; and he gave assurances that he’ll fight antisemitism. That’s all American Jews need to hear, right?

No. Just kidding. He also said he plans to help small businesses. Oy.

What did Biden’s Arab and Muslim community pages look like, I wondered? They did not seem canned. They were not the uninspiring collection of passive reassurances found on the Jewish community page. They described planned action for making change and improvements for the Arab and Muslim American communities.

The excerpts that follow from Biden’s Jewish, Arab and Muslim community pages, suggest active engagement with the Arab and Muslim communities, but passive engagement with Jews. Recently, we have seen attempts by some to push the Jewish community toward the fringes of important debates and Democratic actions. I’m posing a question: Is Joe Biden’s campaign website a bellwether of disengagement by Democrats from the Jewish community?

Here’s what Biden says he’ll do about hate crime for the Muslim community:

Despite comprising only 1% of the population, according to FBI statistics, nearly 15% of religion-based hate crimes were committed against Muslim-Americans in 2018. These are only the hate crimes that are reported. As President, Joe will directly address the rise in hateful attacks, fix long-standing issues with how the government reports and deals with hate crimes, and enact legislation prohibiting someone convicted of a hate crime from purchasing or possessing a firearm. Joe will order his Justice Department to focus additional resources to combat religion-based hate crimes and to confront white nationalist terrorism. Joe’s administration will confront discriminatory policies that single out Muslim-Americans and cast entire communities under suspicion, and he will ensure that our government’s engagement with Muslims is not viewed through a security lens.

Jews make up no more than 2% of the population. According to the latest (2018) FBI statistics for hate crimes rooted in bias against religious groups, 56.9 percent targeted Jews. This is Joe talking “tough” about his plan to fight antisemitism. He will:

Lead a comprehensive approach to battling anti-Semitism that takes seriously both the violence that accompanies it and the hateful and dangerous lies that underlie it. Joe Biden will call hate by its proper name, whatever its source, and condemn it — every time.

Thanks, Joe! Vague promises to “lead a comprehensive approach to battling anti-Semitism” and to “call hate by its proper name” don’t sound like much of a plan to me. It’s obvious we must fight white supremacists, but fuzzy references to fighting antisemitism “whatever its source,” and a fleeting mention of Crown Heights, elsewhere, do not instill confidence that Biden has a plan to root out antisemitism from the Democratic Party, where we see serious damage to us and Israel being contemplated.

Jew-hatred is coming from other minority communities; particularly, parts of the black community. Arab and Muslim activists, heavily influenced by the severe, and sometimes violent, anti-Jewish attitudes common to the Middle East and North Africa (the MENA) have been welcomed in the party’s Progressive wing. Activists in these and other communities have united to target and isolate America’s Jews, while working to discredit and thereby, eventually, eliminate, Israel.

It is up to the Jewish community to effectively counter-attacks against us. But Biden’s soft-pedaled message to Jews on this subject suggests he may be as hesitant as others in his party to boldly confront anti-Jewish attitudes gaining acceptance there. We must demand more.

This was a shocker on the Arab community page:

Biden will work with Congress to pass two critical pieces of legislation, both cosponsored by Senator Harris: the Khalid Jabara and Heather Heyer NO HATE Act, which would improve national hate crime reporting and data collection, as well as victim assistance and support; and the End Racial and Religious Profiling Act, which according to the Human Rights Campaign ‘would prohibit federal, state, and local law enforcement from targeting a person based on actual or perceived race, ethnicity, national origin, religion, gender, gender identity, or sexual orientation.’

Although the problem of bullying in school is addressed on the Muslim community page, the page for the Jewish community makes no mention whatsoever of the bullying, harassment and physical attacks against Jewish and pro-Israel students now plaguing college campuses. The Trump administration took steps to protect the safety and free speech rights of Jewish and pro-Israel students, so one would think Biden would want to take a stand. But, no. He ignored it. Why?

In a section of the page for Muslim Americans, subtitled “Champion Human Rights and Democracy Globally,” Biden announces his intention to hold a Global Summit for Democracy, within the first year of his presidency. There’s nothing about the summit on the Jewish community page.

You may recall the 2001 UN Anti-Racism and NGO Conferences in Durban, South Africa, where global representatives and activists mounted disgusting anti-Israel and anti-Jewish campaigns. Color me paranoid, but if Biden plans to hold a Democracy summit, and he’s told the Muslim community about it, but not the Jewish community, is his summit already engineered for a hijacking by anti-Israel activists, who use any opportunity they can find to smear Israel, the only democracy in the Middle East?

On the page devoted to Arab Americans, under a subsection titled ‘Defending the Civil Rights of All Americans,” it reads: “Biden will end the Trump Administration’s Targeted Violence and Terrorism Prevention Program, and, before developing new prevention programs, he will conduct a thorough review of past programs and regularly consult with leaders from historically targeted communities, including Arab Americans, to ensure that civil rights are protected.” No doubt, the Jewish community will act to ensure our rights are protected, too, but there is no language on our page to suggest Biden will consult with us or wants actual input from us on this issue. With players hostile to Jewish community interests attempting to disempower us, Biden’s passive assurances that he’s got our back are not enough.

Joe Biden will protect the constitutional right of our citizens to free speech. He also does not support efforts by any democracy to criminalize free speech and expression, which is why he spoke out against Israel’s decision to deny entry to American lawmakers because they favor boycotting Israel. However, Biden has been unequivocal in condemning calls in the United States to boycott, divest from, and sanction Israel.

Here, he takes a direct swipe at Israel. I get it. He’s trawling for Arab votes. But if he’s going to brashly (and dishonestly, in my opinion) use Israel as an example of a democracy “criminalizing” free speech, why not speak to the Jewish community about a serious plan that requires an end to Palestinian incitement to hatred and violence against Israelis before U.S. aid is resumed and before a consulate office is reopened in Washington, D.C.? Or is that too controversial?

For Arab Americans, Biden includes two paragraphs related to adding the MENA category to the U.S. Census. I bolded text for emphasis:

Joe Biden will oppose including citizenship questions on the U.S. Census, and support the creation of a new Middle East North Africa (MENA) category, which was recommended by the U.S. Census Bureau in 2017, so that Arab Americans can be more fairly counted and their needs studied and considered alongside other minorities….

Biden will commission an independent study that will make recommendations on possible additional categories of socially disadvantaged groups, such as MENA, for purposes of ensuring equitable access to federal procurement opportunities.

For Jewish Americans, Joe is silent on the subject of the census. The Census department has consistently refused to include Jews as part of the MENA category, even though we are from the Middle East and don’t ethnically identify with the European or Muslim civilizations that conquered us. Refusing to recognize Jews as an ethnic group, and not just a religious group, relieves the government of any obligation to study our needs from this perspective or to ensure our access to federal procurement opportunities.

These days, the fallacy that Jews are “white Europeans,” because many of us were exiled to Europe, is cynically used to associate us with the white oppressor class, even though most Jews don’t identify as white, and plenty of actual whites hate us and would never claim us. This fallacy is a major component of Palestinian propaganda, and is used to support the claim that Jews living in our own indigenous land of Israel are “white colonial settlers.” It is bad enough that the Arab and Muslim colonizers of the Levant level such absurd charges against us, but to now have a presidential candidate using his campaign materials to effectively advance this fallacy, gives one pause.

For over 100 years, Jews have been active participants in the Democratic party and liberal and progressive causes. Nevertheless, Biden’s campaign web pages suggest he’s taking our community for granted, while he conveys more serious intentions toward communities from which anti-Jewish hostility emanates.  It seems his message to Jews is not meant to inspire action. His message to other communities is. That should concern all Jewish Americans.