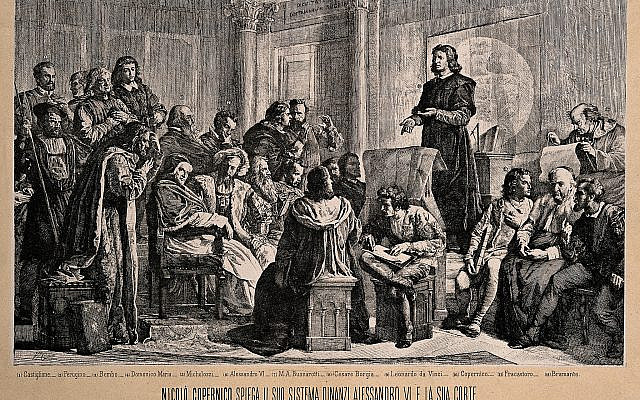 Nicolas Copernicus explaining his planetary system to Pope Alexander VI(Rodrigo Borgia) and artists of the Papal court. Credit: Photomechanical reproduction of a wood engraving by [W.G.] after A. Gerson. Licensed to share under the International Creative Commons attribution 4.0.

Welcome back to my blog on gematria, the merkabah and the birth of the alephbet. Today I’m going to explain to you what a cover-cipher is, and what it has to do with biblical Hebrew gematria.

If you’re new to gematria or you haven’t really looked into it in the last 5 years, you probably believe that most Talmudic authors and Rabbis were using “Standard Gematria.”[1] You would assume that if there were gematria in the bible that it would use Standard Gematria. And you would have good reason to think this. All the greats in Talmudic and Kabbalistic literature appear to have been using this cipher, and nearly all gematria calculators (except for Shematria[2]) will allow you to use this method. It’s not called ‘standard’ for nothing. However you’d only be half right about this because Standard Gematria is a cover-cipher.

So what is a cover-cipher?

A cover-cipher is a published cipher that is openly used to conceal a hidden cipher that is really being used. For example, when asked why the fire festival of Lag Ba’omer was thus named, the Rav Shmuel Baruch said:

We call it ל”ג בעומר Lag Ba’omer because the letters between the ל and the ג [when you continue from the end to the beginning] is מ נ ס ע פ צ ק ר ש ת א ב, which is the gematria of 1393…

He goes on to compare the value of 1393 with another phrase of the same value and seems to explain it. However the worthy Rav is using Standard Gematria as a cover-cipher to hide his real calculations which are composed in biblical gematria:

That’s how a cover-cipher works. It’s like a stage magician who distracts your attention from one hand to another so that he can pull off an illusion. There are also cover-ciphers for Greek and cover-ciphers for English occult texts composed in the last century by Aleister Crowley and the Golden Dawn.

When academic scholars questioned whether there was gematria in the bible they used the Standard Gematria cover-cipher to assess the question and (naturally) came up empty handed. They were clever enough not to assume that there was no gematria in the bible, but they said they couldn’t find it. This isn’t surprising because biblical gematria is not easy to find. No information about it was published until 5 years ago, and it is counter-intuitive to consider a number system featuring two letters for a single value (twice).

Thus the complex and beautiful art of gematria remained in the shadows, and people came to believe (and most still do today) that gematria was simply the act of comparing the numerical value of one word with another – not realising that biblical gematria functioned to supply vital but missing information in enciphered texts such as the bible.

Today, if you ask Google about the gematria of Genesis 1:1 you’ll see that most people believe the result is 2701. This counts all the prepositions as well as nouns and verbs, even though biblical authors only counted the nouns. Calculating just the nouns with the cover-cipher will give you a result of 1690. But counting them with the correct biblical cipher produces the correct result:

בְּרֵאשִׁ֖ית + אֱלֹהִ֑ים + הַשָּׁמַ֖יִם + הָאָֽרֶץ = 700
700 is for the seven days of creation and the seven palaces, and the calculation sets the stage for all the rest of math in Genesis 1-2. [3] Incidentally, this disproves the academic hypothesis that each chapter was composed in a different century, so biblical gematria is not only useful for revealing esoteric secrets hidden in the text.

That’s all for today. Many people still believe that Standard Gematria is a legitimate cipher (in my opinion that is akin to a situation where the majority of people believe the world is flat), so please share this article and spread the education. Together we can correct a gross misunderstanding that has warped the study of the bible for centuries. Also please check out the Shematria calculator and give us a like on Facebook. I suggest the values 220, 700, 666, 777, and 9000 to start you off.

In the new year I’ll be going slightly off topic to tell you why I think Google is evil, but in a round-about way it’s still gematria related. Can you hear the sound of that axe grinding yet? Stay tuned for more numerical honey and enjoy the holidays. 🙂