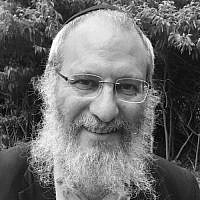 The Blogs
Shlomo Kabakov
Apply for a Blog
Please note that the posts on The Blogs are contributed by third parties. The opinions, facts and any media content in them are presented solely by the authors, and neither The Times of Israel nor its partners assume any responsibility for them. Please contact us in case of abuse. In case of abuse,
Report this post.

Back in March 2020, as a result of the current pandemic, my entire mental health clinic went online.  At the time, we were living in Jerusalem, but this opened up new possibilities.

My wife Yael is a native of Taiwan and had some business to take care of, so we started to plan — but were stopped before we could really get started. The skies, as well as the Taiwanese border, were closed to tourists and this meant that I would need to apply for a resident visa, which was basically the same as starting the immigration process. I had to have our marriage certificate notarized by the Justice, Religious and Foreign ministries, in that order. A small obstacle emerged when we realized they were all partially shut down. I would need a thorough health exam, a criminal background check, and have it all translated into Mandarin. At first, it all seemed overwhelmingly complicated, but by June, we were ready to fly. The skies were beginning to open up, and we flew on an empty plane, and after flying from Tel Aviv to Munich, then onto Seoul, a journey to Taipei, we had arrived!

Imagine Chinatown in New York expanding to take over all of New York State —  that’s Taiwan. But seriously Taiwan is what China would be like if back in 1949 the Kuomintang had won against the Communists, a free democratic, proud Chinese society.

The center of Jewish life in Taiwan is the Chabad House, which has been run by Rabbi Shlomi and Racheli Tabiv for about 11 years. What I like about this type of community is the diversity of people and the feeling on Shabbat that we were all so happy to see one another. All meals are communal and it leaves us feeling as if we’re all one big family.

The types of people at the meals are largely academics teaching for a year abroad or permanently at a local university, or doctors doing residency or working. Medicine is highly advanced in the area, especially the field of plastic surgery. For example, a couple from Bnei Brak had a daughter born with a cleft lip, and Rav Fuirer advised them to do the surgery in Taiwan.

Then there’s a group of Israelis selling Dead Sea products and cosmetics. The most interesting to me is the Polyglots. The Polyglots are a distinct group of people who came to Taiwan to study Chinese and Taiwanese, made up of Westerners who speak many languages fluently. When talking to each other they seem to revel in their ability to go seamlessly from Mandarin to Spanish to German, Greek — you name it.

With that being said, it’s all the more interesting when I meet a native Taiwanese person. I sometimes think that this is probably the first and could be the last time they’ll ever see a Jew. The Taiwanese are very polite and humble; I think they go out of their way not to notice strangers, and so even though I may be the equivalent of a Martian, I never really feel people are noticing me. What sometimes gives it away is when I attempt to practice a line of Chinese on them, and they start cracking up. I ask if I said it wrong, and they explain I said it perfectly, and that’s what’s so funny, because seeing the likes of me speak Chinese is like seeing a parakeet talk.

People have asked me if it’s safe for a religious Jew here. Are the Taiwanese anti-Semitic? The answer is no, but there’s a twist. It is known that if a Chinese or Taiwanese person gets engaged to a Westerner, the first thing the parents will ask is if he or she Jewish. Why? Because they really believe that the Jews are extremely successful and talented. How else would they own and control all the world banks?

My wife recently had to undergo surgery on her knee, and when we first met with the doctor he noticed we were Jewish and said that the soonest he could do the operation was on Saturday, but if we preferred he could do it after Shabbat on Monday. I said we needed to ask and get back to him. He then asked: ‘Who do you need to ask?’ I said ‘My rabbi,’ he looked baffled and my wife said in Chinese, ‘Our teacher’ and he seemed to understand.

How does a religious Jew find Shabbat-friendly appliances in Taiwan? In Israel or anywhere with a significant Jewish population you can find appliances that are rigged for Shabbat use —  but not in Asia.

We went looking for a Shabbat-friendly hot water heater. They used to make water heaters with a pump feature, and since adding the electric push-button dispenser, they are sold with both electric and manual dispensers. So we went looking for that in Taiwan. We entered a store and my wife explained what we wanted and the seller said ‘You no longer have to do that, they now work with the push of a button and showed us one that no longer featured the pump.

My wife explained that we’re Jewish and that we keep Shabbat, and let her know we couldn’t use the electric pump. The woman looked like we just landed from Mars, but then went to the show window and took out one with only the pump that was collecting dust, that no one needed that anymore. She showed it to us, and again tried to convince us that it would really be simpler to just push a button, but we explained this is exactly what we were looking for. She said that since she had given up on selling it she would give to us for 50 Yuan, less than 2 bucks, but of course, my wife has bargaining in her blood and opened it up, looked inside, and commented that it was a bit small, and the lady said, you know what, just take it for free. Needless to say, it was perfectly new and adds much to our Oneg Shabbat.

In a country with only a handful of people who care about Kashrut, there is of course no incentive for food companies to get a Kashrut certification. So for one you can buy anything raw, but because of syndication we Jews go on treasure hunts in Taiwanese supermarkets and we actually find a few things with Hechsharim, and this information gets shared and soon we all know that this place has the soy sauce with the OU, this place has coconut cream from Thailand with the OK, and more.

Probably the most challenging part of living a Jewish life in Taiwan is the Mikve. As of the writing of this blog, there is a Mikve under construction which will hopefully be functional by summer 2021. Before the Pandemic you had two choices, fly to nearby Hong Kong or use the many beaches in Taiwan. The Ocean is actually a halachically mehudar Mikve, but is still run by Mother Nature and can get rough. The sea is typically calmer during the day than at night, if the tide is out you may find yourself walking half a kilometer from where the water usually is until where it is at that moment. And of course, there is winter, and the ocean doesn’t come with heating!

There was once a rainy stormy night, high winds, and the sea was raging. It can be scary, but not really dangerous because you don’t go in too deep and the water pushes you toward the shore. After a challenging teviloh, we were leaving the beach, and were met by a coast guard dressed in a full orange bodysuit —  better rain gear than we had! He looked baffled, and politely explained to my wife in Chinese that it would be a better idea to go swimming in the daytime, and we couldn’t even begin to conjure up an explanation!

About the Author
I hold a Masters degree from the Wurtzwieler School of social work, training for Cognitive behavioral therapy at Hadasah Ein Karem, and training for family therapy in from the Family Institute of Neve Yerushalayim. I completed additional certification in Internal Family Systems Therapy, which is an experiential therapeutic method used for treating a variety of issues. I treat couples using Emotion Focused Therapy, and have completed at Bar Ilan University the two year academic requirement to treat Sexual Dysfunction. I am in the process of completing certification in EMDR (eye movement desensitization reprocessing) an evidence based therapy for post trauma.
Related Topics
Related Posts
Comments