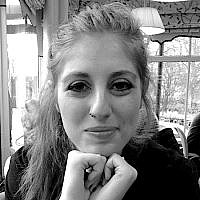 The Blogs
Rachel Myerson
Apply for a Blog
Advertisement
Please note that the posts on The Blogs are contributed by third parties. The opinions, facts and any media content in them are presented solely by the authors, and neither The Times of Israel nor its partners assume any responsibility for them. Please contact us in case of abuse. In case of abuse,
Report this post.

A week after landing in New York from Tel Aviv, N and I are still terribly jet lagged. It’s bitterly cold outside, but we don our thermals and wrap up warm to take the dog out, grumbling as the icy wind slaps us in the face. Inevitably, we end up walking for far longer than intended, time whipping by as we explore each street of our new neighbourhood — The East Village. As we pass Katz’s and Russ and Daughters, my Ashkenazi-Uruguayan-Israeli husband pauses, confused. They Aren’t Kosher! He says.

Yes. I explain, jumping at the chance to show off my local knowledge, They Are Kosher-Style… They Probably Were Kosher At One Point But Now It Isn’t Important.

But People Are Lining Up To Get In! He peers into the window for a long spell, which really riles up my inner Englishwoman, and I pull him and the dog along. We walk in silence for a while, N deep in contemplation until we approach Yonah Shimmel’s Knish Bakery, the final straw, prompting him to blurt out, indignantly, My Grandma Makes These!

I stay silent, having never had one.

Jewish New York, the culture and traditions of my Ashkenazi ancestors permeate the entire city in a way I’ve never experienced, particularly when it comes to food. When I made aliyah five years ago and married a South American, I was prepared for the accompanying culture shock. But I never expect to be shocked by my own culture. Bialys, brisket and matzo ball soup, which previously were regulated to niche kosher restaurants on London’s shtetl-esque Golders Green Road, fated to be burnt to cinders in an “electrical fire”, or to my own kitchen Israel, are now a dime a dozen, not only eaten by all of New York, but associated with it.

When I lived in Tel Aviv, I lead culinary tours around the Carmel and Levinsky Markets. We would begin our Levinsky tour at a family owned deli named Lupo, a third generation business selling smoked and pickled fish — herring, lox and mackerel. Their average customer is 70 years old; the nearly isolated street they sit on used to be full of delis just like them, now they are the only store left standing. They work hard, the hipster crowd that has engulfed the neighbourhood in recent years prefer hummus to herring, and Roy, the third generation, does not want his daughter to follow in his footsteps. The store will close with him.

Jewish food in Israel isn’t Ashkenazi. It is kubbeh and Yemenite soup and chraime. The bagels are long ovals, covered in sesame seed and served with za’atar. Only ultra-Orthodox neighbourhoods like Meah Shearim and B’nei Brak, communities which haven’t changed their way of life for generations and segregate themselves from society, sell cholent and kugel and gefilte fish.

In New York and Israel, there are a mix of Sephardic and Ashkenazi Jews, so why is their Jewish culinary culture limited to one particular group? Of the many theories and explanations I’ve heard over the years, the following seem the most considered:

Whilst Sephardic Jewish communities existed in New York before the Ashkenazim arrived — the first to arrive were Portuguese-Jewish immigrants from Brazil in 1654, the following boatloads of Central and Eastern Europeans which docked in the 1880s simply far outnumbered them, and thus had a far greater impact on the city. Practically, too, in those days, fatty, filling Ashkenazi food fuelled New Yorkers through freezing winters and hard manual labour.

Nowadays, the ‘Jewish’ delis selling Ashkenazi staples that remain standing are considered landmarks and, though they are far fewer in number than they were 100 years ago, are beloved — just try to get a table for weekend lunch at Russ and Daughters and you’ll see what I mean. Modern food trends, such as a return to tradition and a focus on artisanal products, have sparked a renaissance of Ashkenazi eats, seen at SoHo’s Sadelle’s, which serves up refined deli fare as well as the classics, with smoked-fish towers and deep-fried challah French toast, and Brooklyn’s Frankel’s – a young deli founded by three brothers, serving reimagined versions of the food they grew up on.

Jewish pioneers in the early years of the State of Israel were subject to strict rationing. In many instances, the food they had grown up eating was simply not available, so they were forced to utilise local ingredients and copy the eating habits of their Arab neighbours. Post-rationing, a number of Ashkenazi eating establishments opened up, but they were, and still are, few and far between, perhaps due to practical reasons — the fatty, heavy eats necessary to survive harsh Eastern European winters were far less suited to the hot and humid Mediterranean climate.

Most importantly, I believe, was the mindset of the early Zionists, who wanted to fully immerse themselves in their new homeland and shed their previous ways of life to distance themselves from Jews in the diaspora. Eating locally and authentically was necessary in proving yourself as a New Jew, a mindset which has never fully left the Israeli psyche. The resulting Israeli cuisine — a hodgepodge of Sephardic/Mizrahi and Arabic influences — is marketed both in Israel and New York as just that – Israeli, and not Jewish.

N and I have now been in New York for four months, in which time we have enjoyed many a stuffed pastrami sandwich, and gorged ourselves on an obscene amount of cream-cheese and lox filled bagels (though vendors never understand me when I say “shmear”; it seems I’m missing the necessary American twang). He remains perplexed when I order matzo ball soup at a restaurant and I have resigned myself to the fact that it will always be a dining-room table dish for him.

Sometimes, when we miss Tel Aviv, we play Omer Adam’s greatest hits and rustle up nostalgic eats like malabi and sabich to remind us that we are Israeli, as well as Jewish.

About the Author
Rachel is a freelance journalist with a focus on arts and culture. A born and bred Brit, Rachel lived in Israel for five years before her Uruguayan husband was relocated to New York. She now, semi-reluctantly, resides in the Big Apple, where people mistake her for an Australian far too often for her liking. Her work has been published by the Jerusalem Post, Time Out Israel, the Forward and Kveller.
Related Topics
Related Posts
Rachel Myerson
Comments