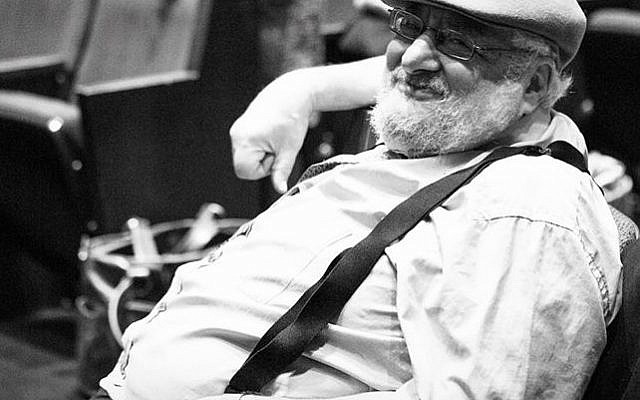 My father, Dr. Richard Curwin, died last month in Jerusalem. I recently found this unpublished essay of his, written in 2013.

When I was about 7 years old, I was waiting for the streetcar to take me up to Blue Hill Avenue in Dorchester, a Jewish enclave in Boston. There, on the ground, was an old nickel. A nickel in those days could buy so many things I wanted: a huge candy bar, five different penny candies, a big bag of popcorn at the movies or any one of a number of those mysterious gadgets at the 5-and-10-cent store.

It really didn’t matter what I could buy, because regardless of how poor my family was, I had no intention of spending it. It became my lucky nickel. I cleaned it and gave it a place of honor on my dresser. My father had died about three years earlier, a loss I didn’t understand until many years later. All I knew was there was a certain sadness that surrounded my family.

Bobe moved in and she was great to have around. My mother had to go back to work and she barely earned enough to make ends meet. My older sister, Joyce, and I weren’t even taken to his funeral, because in those days, it was thought to harm small children to be directly involved with such powerful loss. Many years later, I made sure all my children went to my mother’s funeral. Even though it was hard for them, they had a chance to express their sadness. They never felt robbed of saying goodbye, the way I have felt all my life.

I didn’t even understand how poor we were, because all my neighbors were poor, too. In high school, I once asked my mother if we were poor. When she said, “Yes,” I asked, “Why didn’t you tell me?”

When I found that nickel, I discovered that good things could happen at any moment. It filled me with hope. I still had that lucky coin in middle school and kept it in my pocket every time I had to take a test. Eventually, I lost it during our move to Brookline, but I have held tight to its memory. I still believe that good things really do happen within the context that both good and bad events change life in a heartbeat, or in my father’s case, the loss of one.

When I made aliyah four years ago, I was committed to do what I could to make Israel a better place. I have tried several small things to bring moments of happiness to people. Little things like commenting on an interesting tee shirt, noticing a particularly beautiful article of clothing or simply smiling at strangers. My grandchildren fear that I scare people when I talk with those I don’t know. They may be right. I talk with people all the time. It’s just a part of who I am. The worst that’s happened so far is that people ignore me and walk away, especially those that don’t speak English. I do worry about crossing the line when I hold out my hand and say, “Give me five,” to kids I don’t know, in places like the mall. I started doing that on airplanes as kids passed me in the aisle. And I only do it when they are with their parents. So far, in the three years I’ve tried that, kids love “giving five” and generally give five with smashing intensity. So far there have been no complaints. But with so much justified fear of stranger danger, I hope I’m not endangering anyone by being too outwardly friendly to children. I think the gain outweighs the risk, but I’m not sure.

I think the reason I behave this way stems from a longing for the neighborhood I lived in as a kid when everyone talked with everyone. If I threw a rock at Cliffy Litsky, my mother knew about it before it landed. Mrs. Cohen told Mrs. Schwartz who told my mother. I couldn’t get away with anything with so many eyes watching, but most of all, I felt safe. After my father died, the community surrounded me like a comforter, protecting me and keeping me warm.

I have that feeling again in my current neighborhood in Efrat. Everyone, with a couple of crazy exceptions, is friendly caring and connected. The kids play on my street and it looks to me that they know they are safe and welcome. It is fun to watch the younger kids shooting baskets. I always stop for a minute to watch and clap when they make one. It feels so great to walk by them and hear them shout, “Watch this,” as they perform for me. I tell them I can’t go into my apartment until they make a shot. Sometimes it takes a while.

What makes me feel the best, though, is reliving that lucky nickel. Now, I leave a shekel at every bus stop while waiting for a bus. It is always in plain sight on one of those plastic seats for anyone to see. They are never there when I return to those stops so I know they have been found. I make up scenarios of a kid finding it and feeling lucky, just as I did as a child. In my fantasy, no one loses a father; it is just a very happy moment for the one who finds it. I always imagine that they spread their happiness to others. Sometimes I worry that finding the shekel will lead to a fight over who saw it first, but, like “giving five,” I’m sure the risk is worth the danger.

Research backs up my belief. In those ancient days when we had pay phones (google it if you don’t know what they are), they tried to determine if happiness can be spread to others. Researchers left a dime in the place where change was returned in the phone. Many people walking by would check the phones to see if any money was there. Observations were made of those who checked, those who found the dime greeted others in a cheerful way about five times more than those who found nothing, and they committed about two times more small acts of kindness. These results strongly indicate that a sudden positive moment generates the spread of good will to others.

I have no way of knowing whether or not leaving a shekel at a bus stop makes anyone happy or if that happiness spreads. But it might. I can’t think of anything I can buy with a shekel worth more than that.

About the Author
David Curwin is a writer living in Efrat. He has been writing about the origin of Hebrew words and phrases, and their connection to other languages, on his website balashon.com since 2006. He has also published widely on topics relating to Bible and Jewish philosophy.
Related Topics
Related Posts
Comments