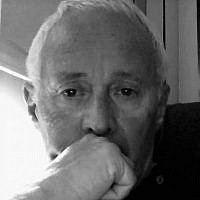 The Blogs
Moshe Pitchon
Apply for a Blog
Advertisement
Please note that the posts on The Blogs are contributed by third parties. The opinions, facts and any media content in them are presented solely by the authors, and neither The Times of Israel nor its partners assume any responsibility for them. Please contact us in case of abuse. In case of abuse,
Report this post.

The shot-from-the-hip answer is the “Jewish New Year,” an answer as prosaic as it is meaningless. Very much symptomatic of the reason why 65% of Jews feel it makes no sense to celebrate Rosh Hashanah by attending a synagogue.

In almost every known human culture, there is a conception of temporal periods which have a beginning and an end. Judaism, as expressed in its liturgy, understands that creation happens daily. Each morning, each sunrise repeats the first sunrise on the day of creation, and that’s it. For Judaism, Rosh Hashanah is not about the movement of the sun and the changing of seasons, it is not about the year, but about the human potential to transform his own life anew.

The Hebrew word “Shanah” translated as “year” is the reason that the greeting “Shanah Tovah” is mistakenly interpreted to mean “Happy New Year.” “Shanah” in fact derives from a Hebrew root that means both “change” and “repetition.” Shanah Tovah, is thus not about wishing non human forces, such as time, to be good (or merciful) but a formula of encouragement to strengthen each individual’s resolution to make personal changes for the better.

This is not a vacuous desire. The holiday gives expression to human experience. testifying that changes can and should be made, that one can relearn from human lessons accumulated throughout the centuries.

Celebrating Rosh Hashanah, Judaism claims that human beings have no choice other than propelling their lives to continually unfold morally and intellectually. The alternative is falling into the black hole of lack of purpose.

Rosh Hashanah asks human beings to explore what can be born anew, what physical, emotional, intellectual and spiritual barriers need to be broken down, what needs to be remembered so as not to repeat the same errors of the past.

Confronted with institutions conspicuously set on their own preservation the vast majority of Jews, at least those concerned with the meaning of their lives, have been turning elsewhere, or nowhere. Thus, the important question for Judaism in the 21st century is: how to save itself from itself.

The answer is to be found in the recipe that has been the key for Jewish survival through time. Judaism not only survived but in fact went from strength to strength, not by meticulously repeating the past but by comprehending the lessons of the past and applying them to the constant development of new capacities and forms of understanding.

Long prayers in highly charged medieval theological poetry are not the instruments with which Judaism can help 21st century Jews to adequately view the state of their lives. Nor do they offer prescriptions capable enough to offer guidance on how to live 21st century lives to their full potentiality; lives unfettered by the stumbling blocks of unavoidable mistakes.

The High Holidays are Judaism’s invaluable contribution to remind human beings that attaining knowledge about themselves is not a choice. Whether they like it or not, in order to live, human beings need to think, to form beliefs. The false religions, of which Judaism repeatedly talks about are those that teach conceptions that hardly qualify as knowledge.

The vacuum that institutions lacking vision have created has not only emptied the pews or build fortresses to prevent human development, it has thrown 21st century youth into the hands of long disqualified views of life that today disguise themselves to be able to prey on the young and the innocent

While the Greeks understood that “the unexamined life is not worth living,” Judaism précised: “Know before whom you stand”

The original name of Rosh Ha-Shanah as found in the Hebrew Scriptures is Yom Hasikaron, “Remembrance Day.” A reminder that questions regarding life have to be asked as well as a reminder in front of whom these questions are to be asked.

Synagogues should not be sources of distraction, but batei kenesset, “houses of reunion” where Jews should gather during this Yom Hazikaron, this “Remembrance Day” to discuss, to exchange notes, to be provoked by the accumulated wisdom of the generations, to look for lives worth living, for lives that are good lives.

Who we really are and why do we exist for an ephemeral amount of time. This is not homiletics but the real questions these holidays are intended to awaken in us.

About the Author
Based in South Florida, Rabbi Moshe Pitchon is a Jewish thinker whose articles on Jewish philosophy and biblical literature appear in media around the work in English, Spanish, French and Portuguese. The head of BY, a “21st century Judaism project,” he is also the president of Friends of the Tzefat-based Ziv Medical Center. This is one of a series of three articles on the High Holy Days
Related Topics
Related Posts
Comments