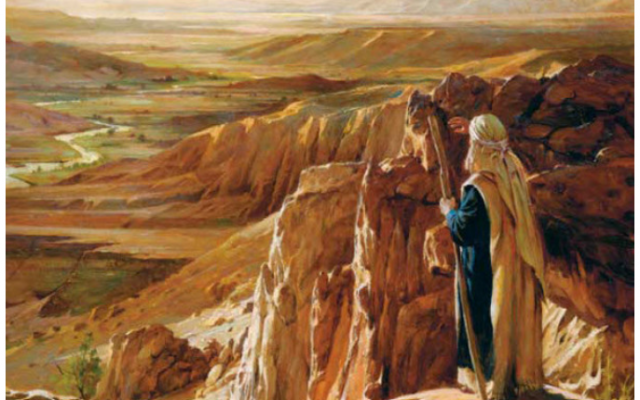 This week’s parsha, Va’etchanan, opens powerfully, dropping us right in the middle of one of the greatest leadership mysteries in the Torah. “I pleaded with Hashem,” Moses explains, “…Let me, I pray, cross over and see the good land on the other side of Jordan” (Deut. 3:23-25). Moses is referring to G-d’s decree that he not be allowed to enter into the land of Israel with the people. As the books of the Torah draw to a close, so does Moses’ leadership, his life, and his lost opportunity to see the Promised Land.

We all know that Moses was not allowed to enter the land. But how often do we stop to really consider why? Moses was initially an unwilling leader who then stepped up to the plate. He confronted Pharaoh, facilitated the plagues, and led the Jewish people out of Egypt. If that wasn’t enough, he brought the Torah down to the people, establishing the Jewish national identity, and navigated 40 years of wandering in the desert, fielding frequent complaints and communal crises. If leadership during COVID-19 has been such a cause of stress and burnout, one can only imagine how Moses felt.

And yet, after all this, Moses was denied the one thing he longs for desperately — to see the land he had been telling the Jews about all those years. He did not insist on entering the land at the head of the line, concluding his leadership with a triumphant entry into Israel. Instead, he begged and pleaded with G-d to allow him to enter any way at all, as a regular person, as a bird, as anything (Devarim Rabbah). This seems to be a small ask for someone who has given — and given up — so much to lead. So why does G-d say no?

The most common answer, the one on the tip of our tongues, is that Moses’ denial is a punishment for his act of hitting the rock (Num. 20:10-12). But does that transgression seem worthy of this level of response? And, as the commentators point out, even if the rock-hitting sin disqualified Moses from entering the land in a leadership capacity, why was he forbidden to see the Land in another way?

Torah scholars offer a range of answers to these questions. Midrash Rabbah suggests other reasons for Moses’ denial, such as his failure to identify himself as a Jew to the daughters of Jethro, when they announced (in Ex. 2:19) that “an Egyptian delivered us from the hands of the shepherds” (Devarim Rabbah 2:8). Another midrash blames Moses’ initial hesitation when called to become a leader. The Ramban cites the sin of anger, as evidenced by the rock episode. Rabbi David Fohrman offers an intriguing perspective, arguing that it was Moses’ “dropping” the weight of carrying the Jewish people when he created a system of judges that damaged the Jews’ trust in G-d to carry them into Israel, thus unwittingly causing the sin of the spies. As Rabbi Shmuel David Luzzatto puts it, “Moses committed one sin, yet the commentators have accused him of 13 more — each inventing some new iniquity!”

Even with all the suggested answers, it remains an open question, a difficult decree to wrap our minds around. As is so often the case, it is Rabbi Jonathan Sacks, zt”l, who provides the answer that gives me the most peace of mind. As Rabbi Sacks points out, there is no single leader figure that dominates all of Jewish history — instead, as time evolves, so does Jewish leadership, taking on different forms to respond to the needs of the generation. Rabbi Sacks writes that “a leader must be sensitive to the call of the hour — this hour, this generation, this chapter in the long story of a people.” Rabbi Sacks contends that a leader of one moment cannot effectively lead a different generation. “This is not a failing,” he writes, “it is the existential condition of humanity.” According to Rabbi Sacks, Moses’ inability to enter the land was not only because of some failing, minor or major, but because the time had come, because the leadership abilities that had allowed Moses to bring the Jews out of Egypt were not the ones needed to bring them into Israel, to move from a nomadic tribe to a settled nation. Moses was limited because he was mortal, and that is what did him in — what does all of us in, in the end.

But there’s a hopeful element we can add to this truth. Yes, leaders are mortal. Yes, what works in one generation does not work in another. However, this reality does not negate the strides leaders can achieve before passing on the torch. As Rabbi Sacks notes, “Had Moses not taught, not led, the Israelites would not have left Egypt.” It is only by each leader playing their part that history can move forward.

In one of the most famous speeches in modern times, Reverend Martin Luther King, Jr. echoes Moses’ inability to enter Israel. “I’ve been up to the mountaintop…” he says. “And I’ve looked over. And I’ve seen the promised land. I may not get there with you. But I want you to know, tonight, that we, as a people, will get to the promised land.” He was assassinated the next day.

This, here, is the essence of leadership: To offer our flawed, imperfect, human service, to take on great problems without fully solving them, to inch closer to a more perfect world knowing we will likely never see it. And then, to pass the baton on to another leader who will carry on the work we started. “The work is not yours to complete, but you are not free to refrain from it,” Rabbi Tarfon tells us. This is the paradox of leadership, that you cannot solve all the problems; that you must try as hard you can. Moses’ heartbreaking plea encapsulates the weight we all feel when we realize the story we are participating in is bigger than us; when we encounter the pain of dreams that will not come to fruition in our days.

Perhaps, then, the best we can do is keep offering our flawed, imperfect leadership for as long as our mortal selves will allow us to. Will we fix it all, right now? Nope. Will we see the fruits of our labor unfold before us? Maybe not. But if there’s anything we can learn from Moses, the unlikely, reluctant leader, is that the world needs us to try, to get us closer than we were. Knowing the Promised Land is there, across the river, just beyond the horizon.

About the Author
Keshet Starr is the Executive Director of the Organization for the Resolution of Agunot (ORA), the only nonprofit organization addressing the agunah (Jewish divorce refusal) crisis on a case-by-case basis worldwide. At ORA, Keshet oversees advocacy, early intervention, and educational initiatives designed to assist individuals seeking a Jewish divorce, and advocates for the elimination of abuse in the Jewish divorce process. Keshet has written for outlets such as the Times of Israel, The Forward, Haaretz, and academic publications, and frequently presents on issues related to Jewish divorce, domestic abuse, and the intersection between civil and religious divorce processes. A graduate of the University of Michigan and the University of Pennsylvania Law School, Keshet lives in central New Jersey with her husband and three young children.
Related Topics
Related Posts