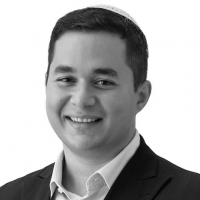 The Blogs
Dan Illouz
Apply for a Blog
Advertisement
Please note that the posts on The Blogs are contributed by third parties. The opinions, facts and any media content in them are presented solely by the authors, and neither The Times of Israel nor its partners assume any responsibility for them. Please contact us in case of abuse. In case of abuse,
Report this post.

The news yesterday that Jerusalem’s new mayor Moshe Lion is cutting the city budget for Olim (immigrants) should come as no great surprise.

After his team promised to increase the budget from a “mini-budget of 12 million NIS that does not allow for much” to at least 20 million NIS, Lion has now made his move — and slashed 700,000 NIS from the municipal budget for absorbing immigrants.

Indeed, when the Municipal Absorption Authority saved this amount on certain programs through outside funding, instead of reinvesting the saved funds in the Integration of Olim, it simply lowered the budget the municipality spends on integration. The bottom line is that a budget is now 700,000 NIS lower instead of the significant increase he once promised.

As an Oleh myself, it’s hard for me to contain my disappointment. As a proud Zionist, however, I feel absolutely compelled to speak out.

Israel is a country of immigrants, united by a common cause, mutual bonds and a deep sense of history. We are not strangers to this land; we belong here, in every sense of the word. Many of the pioneers who picked up stones by hand to clear hills and make way for new towns and Kibbutzim were Olim. Olim are those who join the IDF and dedicate themselves to national service when they could have stayed far away in distant lands. Olim are those who know they could be making more money and living more comfortably elsewhere, but understand that Israel is still being built, and choose to take an active role in shaping our country.

In many ways, Olim are Israel, and Israel is Olim.

Olim contribute massively to Israel, helping make our hi-tech industry world famous. Prominent figures such as Hillel Fuld and Jonathan Medved take Israeli tech from idea to a reality reaching many millions of homes and businesses worldwide. Thanks in part to the hard work of countless Olim, Israeli tech is repeatedly making an impact abroad, making a mockery of BDS.

Not that Lion needs to look so far. Just take Jerusalem’s municipality as an example: Did Lion forget he now occupies the position previously held by Teddy Kollek, an immigrant from Hungary who was so successful that he became synonymous with the role? Kollek was elected as Jerusalem mayor no less than six times.

But why stop at the local stage? Some of Israel’s most famous politicians were immigrants. From Golda Meir and Menahem Begin up to Michael Oren, Olim have always been an integral part of the Israeli political scene.

In the media, David Horovitz’s columns are widely read by leaders and influences around the world hoping to gain insight into Israel, and in establishing the Times of Israel, has sought to bolster the media in order to secure a strong future for Israel in the long-term. In the army and security world, Efraim Halevy served as the director of the Mossad, and Peter Lerner served as the IDF’s English-language spokesman. All three were born and raised in Britain.

The list could go on, but you get the picture. It’s no mere cliche to say that Israel is a country where Olim can, and do, thrive. Immigrants here are not a drain on society; quite the opposite. We see things differently, we bring with us new energy, and we are driven to make Israel an even better place.

If Lion were serious about investing in Olim, if he genuinely meant to keep his promise to expand the budget, the least he could have done would have been to make use of the saved funds to ensure the proper integration of a new generation of Olim. Lion could have subsidized programs helping Olim integrate in the job market, build and properly manage their own companies, learn professional and conversational Hebrew, and become a true force for Jerusalem’s growth. This would have been a smart, easy move with an incredible return on investment.