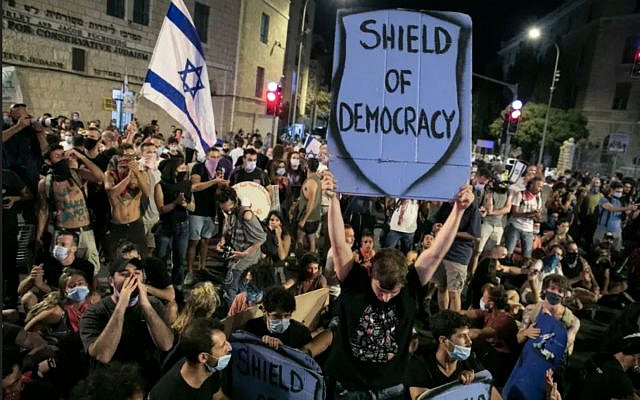 My earring is missing.

A man has just struck me on the side of my head, with a wooden flagpole, holding his beloved Israel flag. He used his flag to knock my earring out of my ear. Tomorrow I will learn from my doctor that I have a mild concussion. For now, I must think calmly and clearly and carefully explain what happened to the police.

My attacker began by spouting a stream of invective and hurling abominable offenses through a megaphone. The peaceful and respectful protest against the corruption in the government had concluded in my town, Yokneam Illit, and a few of the organizers remained behind to clean up. He stood at a distance, fearful to approach the larger crowd that remained, shouting offense after offense. We weren’t Jewish, he yelled. We should go back to where we came from. We were disgracing the flag of Israel. The same one he would use to attack me in just a few moments.

When he approached me and my friend, he continued his barrage. Instead of yelling at a group, now he was verbally assaulting me, coming closer and closer. Telling me to go back to where I came from, a haunting echo of the use of that phrase against immigrants and people of color in the US and around the world time and time again. The sting of that offense rang as loudly in my ears as his words did, and as painfully as the blow to come.

I could not have been more clear.

He was unwilling to listen or care.

He continued to berate us and, though my friend was calling the police, he yelled into his hateful megaphone within inches of my ear. To protect my hearing – really, my body, my right to be in a public space – I took the megaphone from his hands. He responded by hitting me with his wooden flagpole.

My attacker apparently had no qualms seeking out two women, approaching us, and assaulting us verbally and physically. This is a structural, societal problem. The government is remarkably, dangerously, silent. Recently, in the Knesset, efforts to address or even acknowledge economic violence against women were struck down.

The recordings from these sessions reveal how deeply misogyny is ingrained in our culture. Funding to address violence against women and domestic abuse have been held up indefinitely. In spite of these shortcomings, Yet, at the moment, thousands of remarkable women and men — activists — are working to fill this void and help victims of violence against women.

Gender disparities and ingrained misogyny enabled such brazen behavior. Political embers continually fueled are sparking outbreaks of violence against protestors all over the country. These fires, if we don’t put them out, will burn our country down. Violence is the antithesis of democracy.

When I arrived in this country ten years ago, I was anxious and excited to experience a different political system. Politics here were a team sport, an opportunity to come together around shared values and visions, not lining up behind a demagogue.

The violence that we are witnessing, that I experienced, is driven from a place of blind political devotion. Bibi has crafted a cult of personality that is dividing us instead of uniting us and helping ensure he remains in power. The political landscape here has shifted dramatically and in less than a generation. Historically dominant political parties have fallen. Party heads have emerged as candidates for prime minister even as we still simply cast one vote, one small slip of paper, for a party. As if we are actually directly electing the PM here.

I glanced down. My earring was waiting to be retrieved. I picked it up and held it firmly.

The following week I went back to the protest. I spoke to the crowd. It was hard. It was healing.

I used my voice to speak of hope and a vision for a more equal society built cooperatively. The society I was expecting to arrive in as I sat on the airplane more than ten years ago. As I spoke my voice got stronger and I became more resolute. The more we make our voices heard, the more we articulate our vision for the future, the more others will find their voices and join us.

I’m wearing the same earrings. I have replaced the back that went missing. Like my earring, I, too, can be made whole again. And our country can be healed, too.

I will use the power of words and not fists. I will invite others into dialogue hopeful that they will join me. I will challenge others to think critically and honestly. I will remain hopeful. Hopeful that our country can heal and come back together. Hopeful that we will return to the most important work of building a strong Jewish and democratic state that can truly be a light unto the nations. I know that the thousands who are out in the streets week after week, like me, believe this, too. We will continue to use our voices, peacefully protest, and invite others to productive dialogue. We will remain hopeful.