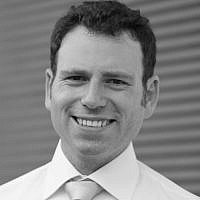 The Blogs
Noah Slepkov
Apply for a Blog
Please note that the posts on The Blogs are contributed by third parties. The opinions, facts and any media content in them are presented solely by the authors, and neither The Times of Israel nor its partners assume any responsibility for them. Please contact us in case of abuse. In case of abuse,
Report this post. 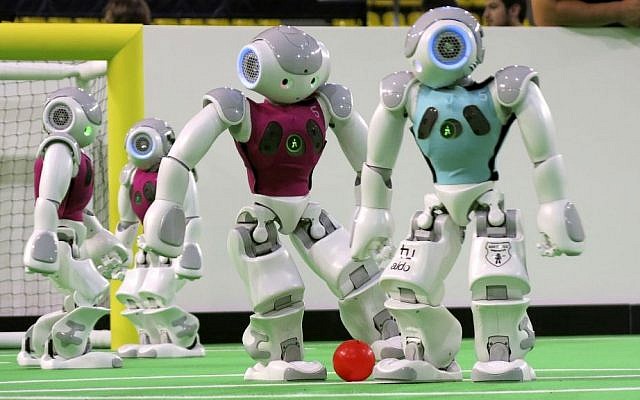 Robots in the 'standard platform' division compete at the RoboCup championships in Eindhoven, Netherlands, on June 27, 2013. (photo credit: AP/Toby Sterling)

The purchase of Mobileye by Intel is evidence of an approaching technological revolution that the government of Israel, Jewish community leaders, and policy makers should be cognizant of and make appropriate decisions and investments to stay ahead of a rapidly changing world.

Earlier this month the Jewish People Policy Institute held a conference to consider shifting trends in the West and their impact on Israel and the Jewish people. Included in those trends are technological changes that have dramatic implications.

The confluence of advances in the fields of computational design, nanotechnology, additive manufacturing, materials engineering, artificial intelligence, and biotechnology could potentially change societies as much as the agricultural or industrial revolutions in previous eras. The sum-total of all these technological developments could be compared, not to the invention of electricity or the car, but to the ability to control fire or the invention of the wheel.

Technologies that may still sound like science fiction already exist today: Direct neural interfaces, which convert neurological processes into electrical signals, can be used to control computers and mechanical devices; Graphene, which is 200 times stronger than steel, more flexible than rubber, and conducts electricity and heat better than any other known material, can be so small that it is invisible to the naked eye. Just as the utilization of silicon helped pave the way for integrated circuits and the computer revolution, graphene is expected to play a crucial part in molecular electronics, a branch of nanotechnology that is expected to enable the shrinking of electronic components beyond the current limitations of existing technologies.

The rapid progress in genetic engineering over the past several years and the potential of what lies ahead will make it possible that in the next several decades mankind will take control of the evolutionary process and will be far less constrained by the laws of nature. Renowned theoretical physicist Michio Kaku argues that our species is destined to “become the gods we once worshipped and feared”. With man having more and more god like powers how will man’s relationship with god change?

There is much talk in the tech community of the possibility of an approaching ‘technological singularity’, when artificial intelligence will surpass that of man. After which, computers will design objects and engineer materials beyond what humans can create.

But with advances in artificial intelligence, more jobs are becoming automated by computers and machines. This is already having a polarizing effect on the economy as middle-skill jobs are being automated and the jobs that are being created are for highly skilled workers. This will be a major economic challenge for Israel as it already struggles with income inequality.

Intel’s purchase of Mobileye is a major investment by the chipmaker in the automated driving industry. Many major automotive companies plan to have fully automated self-driving cars on the market by 2021. Self-driving cars will transform the transportation industry and save and improve lives, but with most transformational inventions, there will be some creative destruction. There are 40,000 taxi drivers in Israel whose jobs will eventually be replaced by cheap self-driving taxis in the coming decades. How will the government ensure those drivers will eventually find employment and not end up becoming an economic burden on the country?

Previous technological societal revolutions had a profound impact on the Jewish people. For example, the European Enlightenment, led to Jewish emancipation, political Zionism, and the theological schisms within Judaism that have shaped the Jewish world of today. Concurrently, the Industrial Revolution transformed European Jewry from agriculturally centered to urban living. Jewish urbanization resulted in a new Jewish middle class that adopted the culture of their non-Jewish bourgeoisie contemporaries. The post-World War II era in North America saw the Jewish community go from a middle class of merchants and shop owners to a predominately highly educated upper middle class of doctors, lawyers, and other professionals.

Although one cannot predict the full implications of scientific and technological breakthroughs and the issues that will arise in their wake, developments today are of sufficient importance that decision makers should start to consider how these developments and the next technological revolution could impact Israel and the Jewish people.

Noah Slepkov is a Fellow at the Jewish People Policy Institute, he specializes in Science, Technology, and Data. He is the author of “Crowd Sourced Genealogy and Direct-to-Consumer DNA Testing: Implications for the Jewish People”.

About the Author
Noah Slepkov is a Fellow at the Jewish People Policy Institute and a managing partner at theMadad.com. Previously, he worked as a Foreign Policy advisor in the Knesset. He holds a master’s degree in diplomacy and conflict resolution from the Interdisciplinary Center Herzliya.
Related Topics
Related Posts
Comments