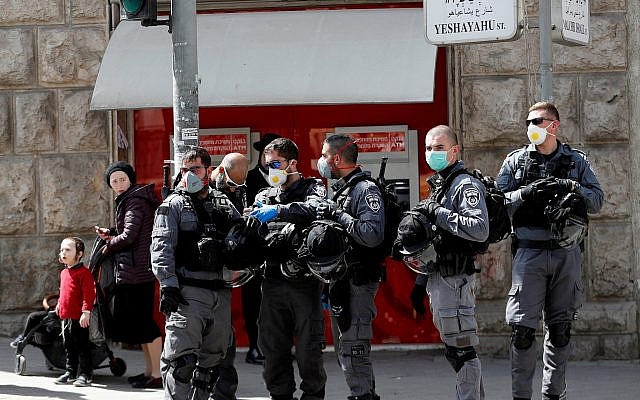 As the coronavirus spreads around the world, making entire populations feel small in its presence, conditions have been set by which humanity can undergo a major shift from its emphasis on the self-concern of individuals and nations, to an emphasis that is more balanced with nature—where we all consider humanity’s benefit.

And indeed, many nations’ citizens have exemplified tremendous mutual responsibility in aligning with the new conditions. In particular, China’s people have carried out their government’s regulations with great care and strictness, and they already show signs of recovery from the crisis.

Discipline and mutual responsibility of a country’s citizens in response to governmental lockdowns, travel restrictions and social distancing measures is indeed key to recovering from the pandemic. There are such countries that have a characteristic disciplinary quality, China being one of them, also Germany, where I expect those countries to recover sooner than others due to their diligence in maintaining their government’s guidelines.

Where is Israel in this process? Israel is a completely different animal.

Even in the face of a crisis that corners everybody, Israel—both at the governmental level, where its leaders show no motions toward exiting the political deadlock, and also on a societal level, where large segments of the population ignore health department guidelines to avoid large gatherings—demonstrates itself as the last nation in queue to overcome its differences and join its forces in the presence of a greater threat.

Israel’s reluctance to band together even during a global pandemic exemplifies what the Torah has written about the nation, that the people of Israel are a “stiff-necked people”[i] who follow the “stubbornness of their evil hearts.”[ii] In other words, the egoistic human nature residing in every person—which the Torah describes as “evil,” since it leads people to harm others in its emphasis on self-benefit over benefiting others—is distinguishably bigger in the people of Israel.

It is not that Israel is unorganized in its reaction to the pandemic. Due to Israel’s extensive experience and preparedness for war situations, its systems are always on guard to respond quickly to emergency situations. Thus, Israel’s rapid response to the coronavirus has nothing to do with its citizen’s level of mutual responsibility, but is merely due to Israel’s need to coordinate immediate responses to its neighboring countries’ war moves.

Also, in relation to restrictions imposed by the government, we still see certain segments of the population ignoring the guidelines and continuing to gather. Prime Minister Benjamin Netanyahu warned that by the end of April in Israel, the number of people infected by the coronavirus could reach 1 million, which would mean around 10,000 fatalities, if its residents fail to uphold the restrictions.

Therefore, in the near future, we can expect to see the outcome of countries’ populations that successfully apply efforts to protect themselves, and those that fail to do so. For the time being, Israel shows signs of setting itself up for a major spread of the virus. For instance, while Israel’s Ministry of Health sets guidelines, it is a pity that they are not enforced more assertively in order to better restrict the virus’ spread.

In short, we need to isolate ourselves from each other in order to stop the virus’ spread, for a short period of time, because it is indeed expanding in every direction.

I myself nearly never leave my room, and if I do, I make sure to maintain a two meter distance between myself and others, exactly as the Health Ministry guidelines stipulate. I do so because I witnessed first-hand the example of my teacher, Kabbalist Baruch Shalom HaLevi Ashlag (the Rabash), seeing how he followed government regulations and recommendations in a very exacting manner. He accepted conditions set by the government as if they were laws of nature, because he had contact with the complete system of reality, and saw how all is controlled from a single force that passes down rules and recommendations for the public to follow through the world’s leaders and experts.

Therefore, for Rabash, it was not merely government officials that he was obeying, but the higher force of reality. Likewise, today, from above there are conditions set for us to socially distance ourselves for our own protection and because we endanger others if we fail to do so. As such, we would be wise to follow such guidelines.

If we manage to sustain the social distancing conditions, then, as I have written and spoken about extensively, we can make optimal use of our time in order to learn about nature’s interconnectedness and interdependence, about how we are inseparable parts of nature, and that in order to experience a harmonious response from nature instead of pandemics and other problems, we need only positively connect above our differences.

In other words, while nature has sent us to our respective rooms, we should ideally think about how we can create a new atmosphere in society, where we think about benefiting others over personal benefit. If we succeed in doing so, then we will experience a whole new kind of harmonious reality the likes of which we have never before seen or felt.

[i] “’I have seen these people,’ the Lord said to Moses, ‘and they are a stiff-necked people. Now leave me alone so that my anger may burn against them and that I may destroy them. Then I will make you into a great nation.’” (Exodus 32:9-10)

[ii] The Lord said to me, “Proclaim all these words in the towns of Judah and in the streets of Jerusalem: ‘Listen to the terms of this covenant and follow them. From the time I brought your ancestors up from Egypt until today, I warned them again and again, saying, “Obey me.” But they did not listen or pay attention; instead, they followed the stubbornness of their evil hearts. So I brought on them all the curses of the covenant I had commanded them to follow but that they did not keep.’” (Jeremiah 11:6-7)

About the Author
Michael Laitman is a PhD in Philosophy and Kabbalah. MSc in Medical Bio-Cybernetics. Founder and president of Bnei Baruch Kabbalah Education & Research Institute. Author of over 40 books on spiritual, social and global transformation. His new book, The Jewish Choice: Unity or Anti-Semitism, is available on Amazon: https://www.amazon.com/Jewish-Choice-Anti-Semitism-Historical-anti-Semitism/dp/1671872207/
Related Topics
Related Posts
Michael Laitman
Comments