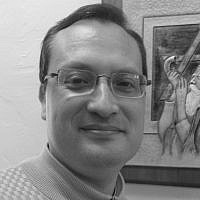 1. Hamas took over Gaza from the Palestinian Authority in 2007. Israel had withdrawn all of its citizens including all of its military from Gaza in 2005 and Egypt has been in control of the Rafah Border Crossing since that time. Hamas’ believes that it is the duty of every Muslim to fight against the existence of the Jewish state and that terrorism against civilians, including women and children, is legitimate and will eventually work. Haviv Rettig Gur’s article about Hamas’ mindset is a must read. Hamas has conducted numerous terrorist attacks through the years in which it send men and women with explosive belts into Israeli cities to kill themselves along with as many Jews as possible. Hamas is recognized as a terrorist organization by the United States.

2. Hamas, an offshoot of the Egyptian Muslim Brotherhood and its ally, celebrated the ascension of the Muslim Brotherhood in Egypt. Later in came to both promote and support attacks, some by other militant groups, in the Sinai Peninsula against the current Egyptian government led by Al Sissi in Egypt. These attacks including a particularly bad one in August of 2012 that left more than a dozen Egyptian soldiers dead resulted in 2013 in Egypt launching a major operation to close most smuggling tunnels into Gaza along with closing the Rafah border crossing into Egypt.

3. Hamas began to fire rockets, mostly mortars and relatively inaccurate Qassam  rockets, at Israeli communities beginning in 2006, after Israel withdrew from Gaza in 2005, and several years prior to the Naval Blockade enforced by Israel in 2009, only after longer range and much more deadly rockets were used by Hamas. By Winter of 2009, several thousand rockets had been fired at Israeli cities not just along the Gaza border but further afield. The Israeli city of Sderot received much attention because of its bomb shelters and programs for children with Post-Traumatic Stress Disorder. Israel launched Operation Cast Lead in December 2009. This article by Alan Johnson in the Daily Telegraph does a good job of summarizing the history of events surrounding rocket fire and the blockade.

4. In May of 2010, the Free Gaza Flotilla sailed from Turkey to Gaza in an attempt to break the Israeli naval blockade of Gaza. While international attention was focused on such things as limited medical supplies, some of which were actually useless and primarily for symbolic value, and then all attention came to be focused on the violence aboard the Mavi Marmara, the primary cargo carried to Gaza by the flotilla was cement.

5. In 2011, Hosni Mubarak, Egyptian Dictator and an ally of the Fatah Party and Mahmoud Abbas, was deposed in favor of Mohammed Morsi, the leader of the Egyptian Muslim Brotherhood. Over the ensuing year, the border between Gaza and Egypt was entirely open.

7. Over the course of that year, Hamas added medium range M-75 rockets capable of reaching the outskirts of Tel Aviv and Jerusalem to its arsenal. Initially, these rockets were brought in from Iran into Sudan, potentially having been assembled and/or stored at the Yarmouk weapons factory outside of Khartoum which the Israeli military struck in October 2012, and then into Gaza primarily via smuggling tunnels in the Sinai, though some fishing vessels may have also been used to deliver them. With the open border and possibly because of the destruction of the weapons it may have been expecting to come from Yarmouk, Hamas launched a new rocket based operation against Israel in November of 2012. The use of longer range rockets was the primary reason for Israel to launch Operation Pillar of Defense (aka Pillar of Cloud) in 2012, a eight day operation that was highlighted by the effectiveness of the newly introduced Iron Dome anti-missile system. Hamas agreed to a ceasefire November, 2012 that has been in effect for the past two years prior to June of this year.

8. Since the Winter of 2012, Hamas began trying to bring in Iranian/Syrian made M-302 extended range rockets capable of reaching 80% of Israeli cities from Gaza and doing substantial damage when they strike. In March of 2014, a ship known as the Klos-C carrying M-302s from Iran was captured by the Israeli navy while trying to deliver dozens of M-302S to Gaza, but it is clear that many more arrived via other means, most likely crossing the border from Egypt prior to the end of 2013 when Egypt began closing smuggling tunnels in earnest.

9. June 2, 2014 the Palestinian Authority announced the creation of a Palestinian Unity government that would include representatives of Hamas as well as those of Fatah, the primary party in the West Bank led by PA President Mahmoud Abbas. Hamas’ primary goal in joining the Unity Government was to open the door for funding to come to pay its 40,000 employees in Gaza.

10. With the Egyptian closure of both the Rafah border crossing and most of the smuggling tunnels in 2013, Hamas has become increasingly weakened and faces the likelihood of losing any fair election to be held in Gaza at this point. Hamas is unable to convince the Egyptians to open the border or to convince the Israelis to end the naval blockade. The Palestinian Authority’s desire is to end independent Hamas control over Gaza and to restore the PA’s control there in some fashion, if not completely.

11. Hamas’ current plan according to Gershon Baskin, who has communicated directly with Hamas’ leaders, is to force a compromise agreement upon Egypt and the Palestinian Authority by engaging Israel in a conflict that leads to many Palestinian deaths and brings outside pressure upon the situation. The primary goals of its current efforts are to attain a ceasefire agreement that would result in the opening of the Rafah Border Crossing currently closed by Egypt and the payment of the 40,000 Hamas employees, what they are owed as well as ongoing payments. It is not inaccurate to say that Hamas is firing rockets at Israeli civilians and utilizing offensive military tunnels from Gaza into Israel in a manner requiring Israel to kill many Palestinian civilians so that Egypt and the Palestinian Authority respond to its demands.

12. Hamas not only locates is weapons and personnel in or nearby normally protected facilities such as UN Schools, Hospitals, Mosques and civilian housing, it encourages civilians to gather around its weapons and discourages them to flee when notified. The combination of all of these things is a clear attempt to use human shields. Israel meanwhile feeds this practice by regularly calling off strikes against targets when civilians are present. By no means is it the case that civilians are not killed when they do not evacuate targeted sites, they are, and there are certainly also errors on Israel’s part such as the tragic killing of four children near a Hamas target on a beach. Unfortunately, by embedding its personnel and weaponry among civilians, Hamas has created a situation in which Israel both has no choice but to respond and to respond when Hamas attacks from targets where there are civilians present.

13. There is no reasonable argument to be made for Israel to relax its naval blockade of Gaza instituted because of rocket fire coming from Gaza from 2006-2009 because of the massively increased level and severity of rocket fire in the ensuing years. If anything, it is assuredly the case that such a blockade has now been proven essential to Israel’s security.

14. Israel believed that there were “offensive” tunnels dug between Gaza and Israel that were primarily designed to attempt kidnappings of Israeli soldiers, but which also could be used to conduct damaging terror attacks. It did  not, however, realize the extent, quality, or severity of the threat that it faced until July 17th, when thirteen Hamas commandos crossed through a tunnel into Israel near Kibbutz Sufa with the intent of either capturing or wiping out the population of the Kibbutz. Israel then launched a ground operation to find and destroy other similar tunnels. The US government estimates that at least sixty similar tunnels likely exist and that some are also more substantial. One tunnel into Egypt was 1.5 miles long, 66 feet deep, contained electricity and had provisions including food placed along its length to accommodate travelers. The basis of this argument is an understanding of Hamas’ smuggling tunnels into Egypt and the fact that similar tunnels could be created into Israel. There are now jokes circulating that Hamas may have already completed a tunnel into the West Bank from Gaza.  The belief now is that Hamas has used tens of thousands of tons of concrete to build tunnels and bunkers in Gaza which cost it into nine-figures in dollars and that the threat from these is much greater than previously assumed. Israel has already stopped several attacks coming from these tunnels in the last week alone. It is important to note that such a tunnel would have almost certainly been used to move the three kidnapped Israeli teens into Gaza had they not been killed and that whether or not Hamas ordered its operatives to kidnap the teens, it certainly would have claimed the kidnapping had it succeeded.

15. Finally, today, Delta Airlines, United Airlines, and US Airways cancelled flights into Ben Gurion Airport. Following these decisions, the US FAA banned US air lines from flying into Ben Gurion for at least 24 hours because a Hamas fired rocket landed near the airport. This reaction may be an over-reaction based on the shooting down of a Malaysian Airlines plane in Ukraine in combination with US issued travel warnings. Other airlines will likely follow suit.

16. How likely is a ceasefire soon? Here is the ceasefire situation in a nutshell. It has not changed for over a week now. There are two ceasefire proposals being proposed currently. 1. An Egyptian one supported by the Palestinian Authority and to which Israel has agreed that grants none of Hamas’ demands and 2. A Qatari one which grants almost all of what Hamas wants. The Egyptian one is supported by all of the nationalist Arab governments including Jordan, Bahrain, and Saudi Arabia as well as by the United Nations and the United States. Israel has agreed to the Egyptian proposal already. The Qatari one is supported by the Islamist governments including Turkey. Each of these sides wants the other to concede and both sides are willing for the Israel-Hamas fight to continue if the other side does not concede.

About the Author
Rabbi David Kaufman is the Rabbi of Temple B'nai Jeshurun in Des Moines, Iowa, a congregation affiliated with the Union for Reform Judaism. He is also the President and Co-Founder of We Are For Israel, the home of "Centrist Advocates for Realistic Peace" and created the news site about the crisis in the Nuba Mountains, www.helpnuba.net. Rabbi Kaufman maintains an informational blog on which he posts sermons and other materials related to Jewish practice and belief at www.rabbikaufman.blogspot.com
Related Topics
Related Posts
Comments