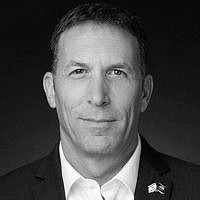 The Blogs
Matan Kahana
Apply for a Blog
Advertisement
Please note that the posts on The Blogs are contributed by third parties. The opinions, facts and any media content in them are presented solely by the authors, and neither The Times of Israel nor its partners assume any responsibility for them. Please contact us in case of abuse. In case of abuse,
Report this post.

At every family Shabbat dinner table in Israel’s national religious community, you can expect to see a rich range of views: from Haredi-Leumi on the one hand to those considered “light” on the other. And at the same Shabbat table, we have always managed to keep the discussion respectful. Unfortunately, there are those in the public domain who are dragging us toward a discourse of boycotts, ex-communication, and contempt for rabbis.

From the early days of Zionism, we strove to build a safe home for the Jewish people in the land of Israel. Now it seems the time has come for us to move on to building the foundation on which the state’s religious identity can stand.

I believe that this foundation can only be built with the cooperation of the entire Jewish people in Israel, Haredim, traditional, and secular. If we do not find a way to reach a broad consensus on issues of religion and state, Judaism will continue to be a cause of bitter social divisions and enmity instead of being the glue that binds us together as a nation.

That is what I believe, and that is the way I operated as minister of religious services.

Regretfully, there are those who continue to opt for an “all or nothing” perspective that has led us to this divisive moment. This outlook is exemplified by the Religious Zionism party, which, in practice today represents the extreme voices of Haredi-nationalist Israel.

In everything I did to improve religious services, I was closely accompanied by prominent rabbis and I did not stray from their directives. Nonetheless, representatives of “Religious Zionism” worked to undermine my every move.

This was the case on the kashrut reform, where I worked to turn the Israeli Rabbinate into a regulatory body, with more supervisory powers than they actually ever had before.

Regarding the conversion issue, I worked closely with Rabbi Chaim Druckman to allow conversions according to Halacha for many people who for too long have been viewed as the outcasts of Israel. Yet, the same Religious Zionism Party chose not to stand behind this vaunted rabbi but rather preferred to stand with those who have despised and belittled him for many years.

This was also the case when I worked for the first time to appoint women to senior management roles in the religious services. Regarding this reform, I was met with personal threats from the Religious Zionism Party members demanding that I fire members of the committee who did not meet their narrow criteria – even after we had labored to make these appointments after years of paralysis and stagnation in the system.

In the upcoming elections, men and women of the “knitted kippah” national religious Zionist community must choose who represents their vision: will it be the Haredi-Leumi religious nationalist extremists, or will they support those of us who have always worked — and will continue working – with great rabbis to strengthen the Jewish identity of the state and to make Judaism the glue that holds us together as a nation?

About the Author
Matan Kahana is a member of Knesset for the New Right and Yamina parties who served as minister of Religious services.
Related Topics
Related Posts