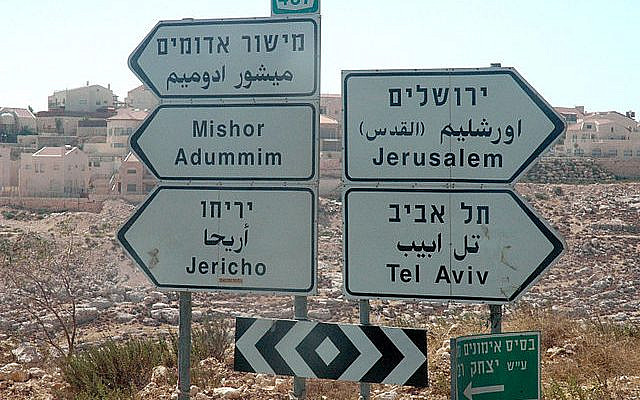 Sunday’s packed weekly government agenda included several high-profile issues — including the establishment of an independent commission to look into the purchase of submarines and further decisions on the handling of the current wave of the coronavirus pandemic. It was also scheduled to deal with a variety of less salient — but hardly less contentious — questions, such as the approval of a new slate of members for the Government Names Committee (or, according to some official sources, the Government Naming Committee). This was the second time in several weeks that this item appeared on the agenda, after a lapse of over two years, during which no effort was made to replace members who had either passed away or resigned. Although far below the public radar, the composition of the Government Names Committee, just as its objectives, have been a source of ongoing contestation since the creation of the State of Israel in 1948.

The ongoing sensitivity over the naming of places and locations is hardly surprising: at stake is a mostly latent, although distinctly acrimonious, struggle over the history, identity, ownership, memory, and collective consciousness of the inhabitants of the land. The debate over names has always been an integral, albeit less noticeable, part of the Arab-Israel conflict. It has also become a vivid reflection of the changing nature of Israeli society. The intention to appoint a new official Names Committee without adequate representation of critical segments of the population — most notably its Arab community — cannot but become another bone of contention in Israel’s highly divided society. From this perspective, this issue has become a microcosm of the conflict. Opening up the Government Names Committee to representatives of all parts of Israel’s heterogeneous population can go a long way towards creating a sense of inclusion for all its many diverse residents and communities.

The preoccupation with Hebrew names for places and historic locations was always an integral part of the Zionist project. In 1925, the Jewish National Fund established a committee charged with giving Hebrew names to all new settlements. By 1948, it had added 400 such designations. Immediately after the creation of the state, a special commission was set up to find Hebrew names to replace Arabic ones in the Negev. Within a few years, it had come up with an extended list of 600 places. Finally, in 1951, the government decided to merge these two bodies and to formalize their status by establishing the Government Names Committee, authorized with the designation of names for all communities and points on the map of Israel “…and the replacement of Arabic names that existed before 1948 with Hebrew names.”

This was no random step. David Ben-Gurion specifically explained in 1951 that the purpose of the newly-formed committee “was to distance the Arab names for state reasons: just as we don’t acknowledge the political ownership of the Arabs over the land, so we do not recognize their spiritual ownership or their names.” The explicit brief of this exercise was therefore not merely historical and cultural; it was also consciously political. The effacement of Arab names was seen as a means of eradicating their heritage on the land, erasing their legacy, and, if possible, banishing their presence.

To drive home the point, the original brief also mandated that all the decisions of the Names Committee would be binding on the government and its allied agencies. Since 1951, successive committees, whose mandate is ostensibly renewed every five years, but whose members have often served for decades, have been responsible for assigning Hebrew names to literally thousands upon thousands of geographic points on the map (including rivers, parks, tourist attractions, highways, junctions, memorial sites, bridges, hills, and valleys), historical locations (as well as tourist attractions), and new communities. Their systematic work has changed the nomenclature of 9,000 places on the official map of Israel, although at some times, the attempt to Hebraize name places was rebuffed in order to memorialize recent historical figures (Kfar Truman and, just recently, Trump Heights) or to commemorate major historical events (the name of Kibbutz Lohamei HaGeta’ot was retained after lengthy debates, despite the fact that “ghetto” was deemed a foreign word).

The composition of the Names Committee has always been closely related to its aims. Its members have been drawn from a select list of prominent geographers, historians, archeologists, biblical scholars, philologists, and Hebrew language experts. For many years, the committee was dominated by men, even though women have become preeminent in the humanities fields so central to its task. Only in the last decade have more women been added to its ranks. Intriguingly, with this expanded representation, for the first time since its inception, more attention is now being paid to commemorating women as well (with the exception of Golda Meir and several biblical figures, very few locations carry female names).

Notably absent are representatives of key segments of Israeli society. Of the 28 names presented to the government on Sunday, 23 are representatives of the public (five more sit on the committee in their ex officio capacity as delegates of key agencies, including government ministries and the Jewish National Fund). Until two weeks ago, the bulk of the list consisted of members closely associated with the political right. Only following protestations of Meretz and Labor were some left-leaning names, such as Yishai Sarid and Dr. Yofi Tirosh, added to the list.

Much more tellingly, there was only one Druze on the list, and not even a sole Arab, though two Arab names have been reported to be added quite recently (by all accounts, Arab society, which constitutes some 20 percent of the Israeli population, should have at least five, if not more, members on the committee). Regional Cooperation Minister Essawi Freij of Meretz registered an objection in the hope of further altering the committee makeup. The Arab members are essential to assuring even minimal consideration for the retention of the names and the connotations central to their heritage. The same holds true for representatives of other communities — such as Mizrahi and Ethiopian Israelis. The close correlation between representation and name maintenance (together with all that goes with it) is by now irrefutable.

Inevitably, the results to date mirror the skewed composition and avowedly ethnocentric goals of the place-name project. They have also caused some curious (and, at times humorous) anomalies, as, until the 2018 adoption of the “nation-state law,” both Hebrew and Arabic were official languages, and all road signs are to be presented in these three scripts. In 2019, the Ministry of Transportation, with the guidance of the Government Names Committee, published a definitive list of all place names in all three languages. Some Arab names, Jaffa for one, have no Arabic transcriptions. For English-speakers, others have been butchered almost beyond recognition (Hadassah appears as Hadasa, Zion as Tziyon, Sinai becomes Sinay, Jezreel is transformed into Yizra’el, Jericho is often presented as Yeriho). Nazareth, mercifully, has been retained in English, but its offshoot, Upper Nazareth (now Nof HaGalil — the View of Galilee) is rendered as Natsrat Ilit. Anyone touring the land is often hard put to identify where they are. Despite the pressing efforts of the Names Committee and the sign-makers, many places are still called by their original (Arabic) names (Masmiye Junction, for one; so, too, Talbiyeh and Katamon in Jerusalem).

Indeed, the elimination of over 400 Arab villages and locations comes with exceedingly heavy political baggage. For example, the precise details of the destruction of Tantura during the War of Independence, a fishing village south of Haifa known today as Hof Dor (Dor Beach) are currently the focus of considerable historical controversy. This specific instance — which was repeated in multiple locations — was dwarfed by the political implications of the official adoption of Judea and Samaria for the West Bank (associated with Jordan), the occupied Palestinian territory (oPt), the occupied territories, or simply the territories. The list of such discordant place names is legion, starting with Sheikh Jarrah or the Cave of Shimon the Righteous and going as far as the Temple Mount and Haram al-Sharif. The battle of names has become the verbal extension of the continuous conflict between Arabs and Jews for control of the land.

Where so much energy and passion are wrapped up in names, for different — and frequently vying – groups, almost all of their being is wrapped up in who determines and controls the nomenclature. It seems as if it is all in the name. It does not have to be this way. The formation of a new Names Committee can begin to change this zero-sum game: the broadening of its composition may offer — as the government decided yesterday with the addition of two Arab members — a vital initial step towards mutual recognition based on the awareness of the rich and diverse historical, religious and cultural mosaic living on the land and the acknowledgment of the different appellations they have for the locations in which they reside.