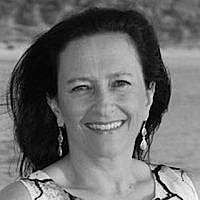 The Blogs
Margo Sugarman
Apply for a Blog
Advertisement
Please note that the posts on The Blogs are contributed by third parties. The opinions, facts and any media content in them are presented solely by the authors, and neither The Times of Israel nor its partners assume any responsibility for them. Please contact us in case of abuse. In case of abuse,
Report this post.

This morning at 5:20 I was awoken by the sound of a siren, its wail was rising and falling. It means a missile is on its way. Its sound makes adrenaline shoot through your body. Like every parent in the region who hears it, you leap out of bed and rush to wake up your family so you can run to a shelter or safe room.

It was unexpected. We live in the center of the country; we are the “spoiled Israelis”, the ones who aren’t constantly plagued by the fear of living near the southern or northern border. We’re blasé. We have genuine sympathy for those who live under the worst conditions of missiles regularly being lobbed over from Gaza into their kibbutzim and towns, but we watch from afar.

We rushed to the safe room in our basement, but it’s filled with boxes. “Spoiled Israelis” really need a safe room because we live far enough away from danger, so it’s a store room instead. And, in spite of the heart stopping early wakeup siren, still feeling a little blasé, we sat in the basement, and didn’t go into the safe room. We turned on the TV and saw the red alert on the screen for the “Sharon Region” (but there was no other news).

And then we heard the boom. It was loud, it was menacing, I think we even felt its vibrations. But, with the memories of Tzuk Eitan, the 2014 war with Hamas in Gaza, clear in our minds, we looked at one another and said: “The Iron Dome.” It must have shot the missile out of the sky.

We waited the obligatory 9 or so minutes for the shrapnel to fall from the sky, and went back upstairs. Only then did we start hearing what had happened. My 15-year-old daughter came into our room to tell us that her friends who live on Moshav Mishmeret, a mere 5-minute drive from our house, texted her that the missile had landed there. We assumed the missile must have fallen in an open field around the small agricultural settlement – yet another ostrich rationalization left over from 2014, when missiles heading for open areas were allowed to fall, and weren’t stopped by the Iron Dome.

But no. This morning we were “otef aza” (the Gaza border settlements).

A family of seven lost their home. Like us, when they heard the siren’s wail, they were jolted into action, and just managed to reach a safe space before the missile hit.

In just over a month, all over Israel, we’ll hear the siren commemorating the six million Jews who died in the Holocaust. It’s a different siren – a flat, monotonous wail that draws your thoughts to the victims of the Nazis, to death. Its unwavering cry is the one note that connects all of us in Israel to their memories as we all stand for two minutes, unmoving, in silence. This morning’s siren differs in its uneven sound that hits you in the gut and propels you to take action. It’s the siren of life, of action, of not being defeated by evil. It’s the sound that saved the Wolf family of Moshav Mishmeret today, and the sound that has saved thousands of Israelis from disaster.

About the Author
Margo Sugarman is the Secretary General of the Israel Association of Baseball, and professionally, a business communications consultant. She lives in Tel Mond, Israel, but was born and raised in Cape Town.
Related Topics
Related Posts
Margo Sugarman
Comments