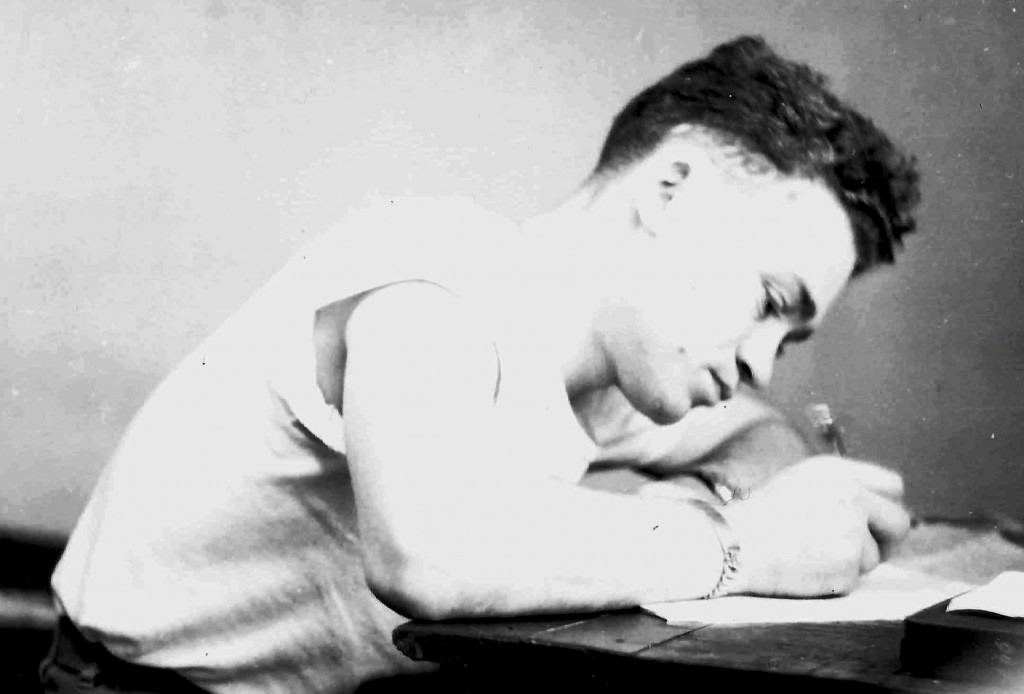 The lights are off when we come into the house, so we flick the switch. Yellow light floods the hallway, illuminating the family photos lined up on the piano and along the walls, making the crystal sparkle in the china cabinet. I expect my mother to come bustling out of the kitchen to offer us chicken soup, my dad to dash up the stairs from the rec room, which he had turned into his dental laboratory. I feel their presence in every room. Where are you guys? But the house is silent.

The kitchen is a world to itself. Holocaust survivors are thrifty. If it worked, it wasn’t replaced, even if it was a dishwasher from the late 70s, enameled in Harvest Gold. Some salesman convinced them that they should wallpaper the whole house in wild patterns, and in some rooms, it is beginning to peel. The refrigerator motor squeals, and the air conditioner whirs, quietly, efficiently, blowing cool air through the vents. The house smells like my father’s lab, which is something of a surprise; Dad passed away two months ago. We are here to clear out the house.

But the house doesn’t know it. The drawers are full of my mom’s pastel sweaters and her pretty embroidered tablecloths, and the china cabinet holds the dishes we never used because someone might break a plate or a teacup. The champagne glasses we never drank from because we were waiting for just the right simcha sit on the shelf, still waiting. That’s what the house does. It waits. It waits for Mom and Dad to come home.

In the past few years, my father seemed to end up in the hospital every other month, sometimes with pneumonia, sometimes with some scary medical event the doctors could never figure out, but a week later, he was always home again. His passing was completely unexpected. The morning the hospital called with the awful, unbelievable news, we were still hoping he would be able to join us for the last days of Pesach.

If the phone rings after 9:00 p.m., my mind jumps to the conclusion that it’s him. I remember that we need to find him a suitable place to live out here, and then, with a sting of sorrow, I remember that we don’t. It’s impossible to believe that we will never again set up his bed in a space we carved out of the living room, curtaining off the cozy area near the fireplace because it was too difficult for him to go up our stairs. Impossible to believe that he won’t be joining us for Rosh Hashanah, or Sukkot, or Thanksgiving, or Chanukah, or Pesach, or any of 10 more special occasions. He was always here for one holiday or another, praising my cooking, grumbling about my stairs, kvelling over the kids, criticizing the kids, arguing about politics, asking for a coffee, seated at the table with a newspaper or parked on my couch watching CNN.

I am an orphan.

You don’t expect it to have as much impact when you’re all grown up. After all, you’re an adult, with kids of your own. But you feel it, more often than you can possibly expect. Life is full of minefields. A class play. The fifth grade State Fair. The second grade Storytelling Festival. The Siddur Party, the Science Fair, a baseball championship, a graduation. You glance around at the families seated around you, three happy generations sitting together on the bleachers or folding chairs or at the restaurant or reception, a raucous mishmash of parents and grandparents and children…and there it is, a strike to the heart. You feel it when the vast majority of your congregation files out for Yizkor, and you stand there watching them go, a small island of grief. You feel it at family get-togethers, when you realize your cousins still have their parents, but you don’t. The list of mundane little activities I will no longer do with my dad is long, and each item astonishes me all over again, gives me a little electric shock when I think of it.

But for now, we must clear out the house. There are decisions to be made. What do we do with the long letters, written in undulating Yiddish, that we do not understand? What about the datebooks from 1963, with my mother’s enigmatic notes, half in English and half in Yiddish, reminding her to pronounce certain words correctly? What do we do with the photographs of my parents smiling next to unidentified strangers? Old passports? Their immigration certificates? My kindergarten report card? My brothers’ graduation programs? The letter from Dad’s army buddy? The mismatched dairy silverware? The sheets of Bicentennial stamps? The couch that was lovingly built by my grandfather, even though it is to no one’s taste?

And I am also burdened by this; my parents were among the last of the Holocaust survivors. My dad was 15 when the war was over, a living memorial to a world that has disappeared, as well as a repository of information about a way of life that was obliterated. His brother, my uncle, can’t talk about his war experiences. My mother’s surviving brother is becoming forgetful. This is the thing I have always feared. My parents’ stories were so individual, unique. Who will tell them to me now?

In the end, all we have are our memories. As my aunt drives me to the airport, we pass the corner at the end of my block. When I was 4-years-old, the school bus that was dropping me off after my first day of camp left me at that very corner. It also happened to be the same day that my family moved to our new house from another neighborhood. Nothing looked familiar. Tearfully, I protested to the driver that this wasn’t where I lived. To which she replied testily, “This is the address I have for you. Now get off the bus.”

I was a good girl. I stepped down and stood on the strange street corner, crying as she drove away. Just then, through the blur of my tears, I saw Dad hurrying up the block to find me, to sweep me up into his arms, to bring me home.