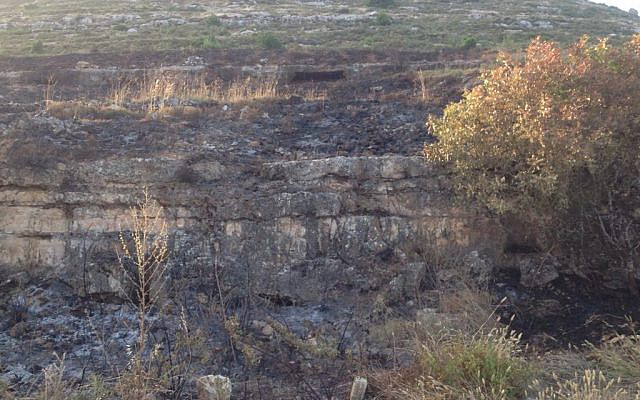 Sorry to disturb you.  I know that the hot issues this week are COVID-19, the oppressive heatwave, and short shorts for high school girls in Israel. Some things just don’t make the cut, so the fact that an Arab arsonist tried to burn down my neighborhood might not have registered. After all, how important could that be?

This is a great example of some of our work. This is one of the camera systems that One Israel Fund participated in. Yesterday, the camera picked up an attempted arson attack outside of, Shilo. The security chief and his team were able to respond quickly enough to put out the fire as well as alerting the IDF in order to apprehend the terrorist.When he returned, the security chief called our director of security projects, Marc Prowisor, to express the community’s gratitude to One Israel Fund. Preventing arson attacks – just another thing One Israel Fund successfully does.Learn more at https://oneisraelfund.org/oif-projects/operation-no-more-jewish-victims/

In order not to be too melodramatic, let me state at no time was there really any danger. Or, at least, not too much danger. I was working on my computer with the windows open (no AC upstairs) when I noticed the strong smell of burning brush. We live at the edge of Shiloh, on a steep hill overlooking Tel Shiloh, the historic site of Israel’s Tabernacle. I ran outside to see a small crowd already gathering; far below (about 700 meters distance and at least 40 meters below us) smoke was wafting upwards towards us. I thought of grabbing a hoe and going down to make a fire break. Twenty years ago I planted 20-30 trees lower down the slope and I hoped that perhaps I could save them. Luckily, the security team came with a fire truck and quickly put out the blaze. From start to finish, not 45 minutes had gone by and the fire was extinguished. While in spectator mode, I managed to hear that it was an arson attempt but dismissed that possibility ( I thought more likely that it was negligence) and then went home and fairly quickly put the matter out of my mind.

Turns out, I was wrong.  It was clearly arson and the whole incident had been captured on one of the security cameras that surround Shiloh. Everything had been seen immediately and that is the reason that the security team was able to react so quickly before any serious damage could be done. The intense heat of the midday sun and the strong breeze to the East to our direction didn’t translate, this time at least, to a tragedy.

As for the arsonist, he was caught very quickly. What his motivation could have been, escapes me. Is it arson in honor of the end of Ramadan? A gesture of defiance on the eve of Jerusalem Reunification Day? Or maybe just a bad hair day and general spleen on his day to day tedium? He cam from Krayiot, one of our neighboring villages, but how could he not know about the cameras? What is sure is that he will be tried quickly and he will join the already numerous security prisoners that Israel incarcerates.

Mentioning the incident to my sister-in-law the next day, she told me that she had seen a small update on one of the internet sites (ARUTZ 7) she checks. Then it clicked. Who reports arson attempts against Jewish communities in Judea and Samaria? A quick check showed that for the most part hardly any media outlets cover them. And this week there were several. On Shabbat, on serious fire between Rahelim and Ariel, and attempted arson at Geva Binyamin, on Monday, a suspected arson near Pnei Kedem, Tuesday a fire near Elad, and on Wednesday the attempted arson at Shiloh and one at Evnei Hafez (the second attempt it seems). Another fire, one near Beit Shemesh, did get reported by Times of Israel, but the rest were missed, perhaps, they were not deemed important or for some other reason.

Jokes about “it bleeds, it leads” or “man bites dog” aside, It is clear that there is too much news these days and all media outlets pick and choose what to prioritize and what to leave on the back burner. Yet, with the internet, there is no longer the space restrictions that made the selection process so necessary. When I was the editor of the Tepee Times at Alta Loma High School we had a mere 4 pages every two weeks and very limited space (and yet no real news to include, after all, what happens in Alta Loma stays boring in Alta Loma). You barely could wrap one medium fish. Couldn’t more space be devoted to the arson attempts that residents in Judea and Samaria face, even as a footnote, in today’s internet sites?

Not limited to arson attacks, every week there are Molotov cocktails and rocks thrown at passing motorists, agricultural theft (livestock usually), and vandalism that never get reported widely, it at all. It is as if, our lives and property are forfeit and of no concern.

My main complaint though is that while perhaps it is understandable why so much does not get reported, it isn’t clear why so much emphasis is given to the scattering of cases of vandalism that occur or alleged to be caused by Jews against Arabs. Underreporting one and over-reporting the other gives a very certain impression to the English speaking readership that may not be familiar with what is happening in Judea and Samaria. There is, of course, no justification for any acts of violence or vandalism against our Arab neighbors by Jews living in Judea and Samaria, but on the other hand, nothing occurs in a vacuum.

Here is the opportunity to praise a real hero and savior: the One Israel Fund, and Marc Provisor, my neighbor and head of security projects for the One Israel Fund. On a daily basis, the security cameras, the special equipment, and life-saving medical kits protect the lives and property of Israelis from Metulla to the border of Gaza to the Negev. For those of you that care and want to help, check out https://oneisraelfund.org/  , and please donate.