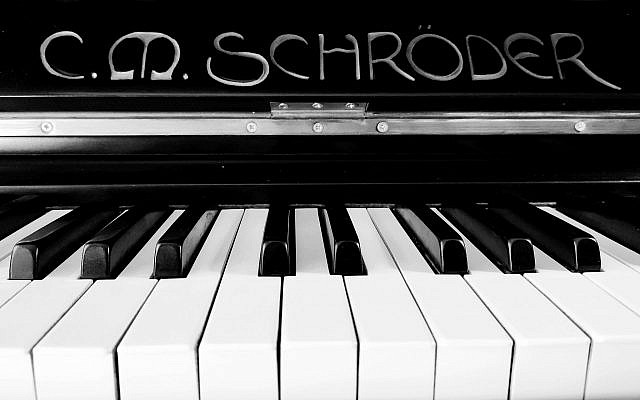 We walked around a bit.

And there she was. My piano. In a corner among worn-out colleagues whose felt hammers were exposed. Black. Large. And stout. It reminded me of the piano at my grandparents where I taught myself to play when I was seven or eight years old. I haven’t played since.

The short, smiling salesman lifted the lid and let me look into the instrument’s insides: frame, strings, and felt hammers. On the gold painted frame was the Czar’s coat of arms and a serial number that revealed that the instrument was born in St. Petersburg in 1908. Built under the license of a German piano company for the upper class of the Czar’s Russia, as he put it.

His name was Schmuel Auerbach.

I imagined the many little Russian children’s fingers who had struggled with the scales on these keys while a German governess dressed in grey listened with a stern look.

If only it could tell its story. About the revolutions and wars. About hunger and distress. The joy and the songs. And explain how, and when, it had come from St. Petersburg – or from Leningrad – to Auerbach’s warehouse here in the Levant.

I bought the piano. I can’t play. But I bought a piano. Today I am going to have my first piano lesson, and I am looking forward to it.

The piano appeared to me on an early sleepless morning. The day after I got my diagnosis. Thoughts were tumbling around in my head in the hours before dawn.

“Time for a decision,” it said on my inner billboard.  I reached for my smartphone and clicked into the Yad2 secondhand site. Musical instruments. Pianos.

I had no idea what I was looking for.

But it should not be too expensive. And it had to be a piece of furniture that would be able to agree with the other inhabitants in my living  room.

I returned several times to an ad showing the image of walnut-colored Russian pianos with carved legs at a reasonable price. Maybe?

Later in the afternoon, I called the number. Unfortunately. The cheap Russian pianos were sold out, said piano dealer Auerbach. He spoke with a singing Russian accent and assured me right away that he definitely had the piano I needed.

“There are 150 different ones in my warehouse,” he said. ”Come by tomorrow. On Fridays I’m not out tuning pianos at the conservatories.”

I was in the hands of a professional.

At 11 o’clock the next day, I went to the first consultation with a completely different kind of professional: Dr. Yaakov Korah head of the Tel Hashomer gynecologic oncology department.

He looked at my PET scan images, read the biopsy report and patiently answered my questions.

There was not much to discuss.

The disease is in Stage 4. Treatment should begin immediately. My good health – apart from the cancer – is a good starting point for getting a good result.

At 12 o’clock, I drove to Auerbach and his 150 pianos on the second floor of a large building in an industrial area. Shoulder by shoulder stood concert wings, high and low, new and used pianos. Auerbach pointed out a few of them and asked what I thought.

“I’ve come for the furniture and for the price,” I said. “It must be beautiful but not expensive.”

And then there she was:  Piana from St. Petersburg.  I was instantly in love.

“My wife is forcing me to recycle old paper,” Auerbach explained, as he cut a piece of paper from a used document and scribbled words in Russian to remind himself and the piano-maker Dima what minor flaws needed to be fixed before bringing me the instrument the next day.

“I’ll take it back when you want a better one,” Auerbach promised as I left.

Now Piana stands here in my living room with her freshly painted exterior and the new felt hammers in her interior.

Destined to bring life and sound into my world, blackened by fear and enlightened PET-scan images.

A loving friend wrote to me:

“May you become brand new inside and filled with new sounds just like your new Russian piano!”

This is my third blog and the third chapter of my book The Lights Within, you can read more about the book and buy it at: http://www.hannefoighel.com