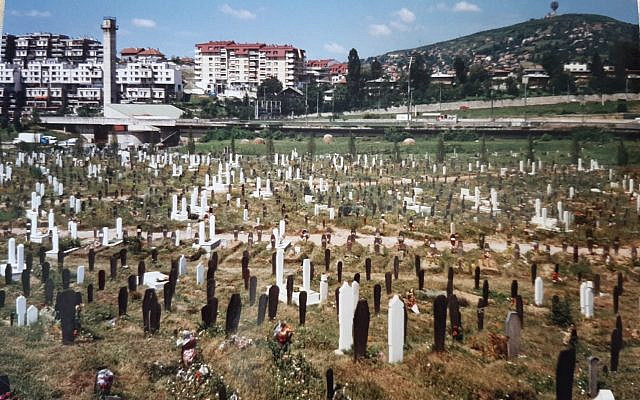 Graves in Sarajevo's Olympic fields (photo taken by author in 1997)

“This nation isn’t coming together… There are too many types… Everyone hates each other!” exclaimed a character in an episode of the popular Israeli satirical comedy A Wonderful Country produced in March just after the latest round of elections. His solution? “Civil war!… You don’t even have to pack up your bags and head off to war in a convoy of jeeps and trucks. No! … You just go downstairs to the war in your track suit and flip flops… Yallah! What are we waiting for? There’s nothing more bonding than civil war!”

The episode was a chilling reminder of a satirical skit my Bosnian friends used to tell me about, produced before the civil war which destroyed their country in the 1990s. The skit featured a “mixed marriage” family who divide their apartment along the ethnic lines which were then beginning to rend the country. The Bosnian Serb father and one son took over half the apartment, and the Bosnian Muslim mother and another son took over the other half, building a wall over which they sparred. “The show was brilliant,” my friend Samir would exclaim. “It’s exactly what came to be!”

And now the “Wonderful Country” clip seems darkly prescient, given the Jewish-Arab violence which exploded across multiple Israeli cities in May, the threats being brought against members of the so-called change coalition, and fears of political violence around the upcoming change. We can only hope that it does not augur a similar art-predicts-life trajectory. And it is certainly not just comedians who have considered this possibility.

The shrinking distance to civil war

“If a divided society goes beyond a certain point, you can end up, in extreme circumstances, with phenomena like civil war,” Former Mossad chief Tamir Pardo warned in 2016. “To my regret, the distance [until we reach that point] is shrinking. I fear that we are going in that direction.” He repeated these concerns a year later, warning that the biggest threat facing Israel is not external but Israel’s internal divisions, and the failure to resolve the conflict with the Palestinians.

I cried when I first read his words. He gave such authoritative voice to what I had started fearing in 2010 when I began to pay attention to news reports about “Price Tag” attacks –vandalism and hate graffiti conducted by Jewish extremists primarily against Palestinians in the West Bank and Arab Palestinian citizens of Israel, and other non-Jewish or Jewish liberal targets. And to directives not to rent to Arabs issued by Israeli Mayors and Rabbis, whose salaries are paid by state taxes. And to legislative attempts, some eventually successful, to restrict the rights of Arab citizens. And to vitriolic rhetoric painting all of Israel’s Arab citizens as terrorists.

I knew well where such voices could lead us if we didn’t take heed. I had worked with Bosnian refugees for some four years, first in a refugee camp in Hungary which sheltered tens of thousands over the course of the war, and then in Bosnia with the post-war return and reconstruction efforts.

Like Israel, Bosnia had national/ethnic differences which appeared intractable, with key players unable to agree upon borders and power-sharing arrangements. Both are multi-ethnic states and civil societies that have struggled to overcome deep inter-group divides. Both have dark histories that include bloody and bitter conflict. This makes both societies particularly susceptible to the influence of fear-mongering, populism and militant nationalism.

The result of Bosnians’ inability to negotiate an effective compromise? A three-year war; 100,000 killed; ethnic cleansing, genocide, and mass rape; two million refugees (half the country’s population); and widespread destruction of cities and villages. War solved none of the root issues. It only made things far, far worse. If trust was hard to forge before the country fell apart, then war-time murder, ethnic cleansing and plunder only made it more elusive. Pre-war Yugoslavia had been among the wealthier, freer, healthier and best-educated of the former communist bloc countries; post-war Bosnia suffers from corruption, poverty, ill health, governmental dis-function and a dim future.

One family whom I befriended when they were refugees in Hungary had the option, at war’s end, to resettle in America, Canada or Australia. Instead, they chose to return to Bosnia, hoping to rebuild their lives and their country. As someone guided by a deep sense of responsibility to my community and people, I understood their decision. Their only daughter, whom I met as a sweet, big-eyed three-year old, is now grown, married, working as a financial analyst and the mother of a sweet, big-eyed baby boy. “There is no future here,” she says wistfully of their lives in Sarajevo. She and her husband want only to emigrate. I can only begin to imagine the depths of her parents’ pain that their hopeful return has met with a relentless quarter century of failed statehood and sorrows.

We don’t have to go this route

Some pointers for what needs to change come from another of Israel’s most senior gatekeepers for Israel’s security. In 2014, just as escalating violence in the territories and within Israel preceded that summer’s Gaza-Israel battles, former head of the Israeli Security Agency (aka the Shabak) Yuval Diskin warned that the government was operating under illusions:

“The illusion that ‘price tag’ attacks are just a few slogans on the walls and not really racism; the illusion that everything can be solved with a little more force; the illusion that the Palestinians will just accept all that we are doing in the West Bank and not respond, despite their rage, frustration and worsening economic situation; …that Israel’s frustrated Arab citizens will not ultimately take to the streets over the lack of treatment of their problems…”

Diskin’s statement is worth heeding. Each of his points has extensive backing from analysts and researchers, not only in the field of security but also policy, economics, shared society, et al. The Israeli public is often quick to point to Palestinians as the problem – for incitement; for ever-present potential for terrorism; for always missing opportunities; for providing “no partner”. But Diskin is looking inwards: Israeli Jews are neither helpless nor victims; we are contributing to the problems and we have agency to overcome and prevent problems.

Israelis – or Israeli Jews, to be more precise – have always had supreme trust in their security officials. Surely, I thought at the time, these warnings will carry enough weight to affect public opinion. And yet, despite the elevated status granted security officials in Israel, warnings from the likes of Diskin, Pardo and numerous others have not sufficiently helped us change course. In the current political climate, those who raise such concerns or criticisms are dismissed as either naïve (at best) or treasonous (at worst), whether they are Jews or Palestinians, whether as citizens of the state or residents of the territories. Even the gatekeepers who have spoken out about their concerns are disparaged as “leftist” by the Israeli political right, and dismissed rather than debated.

The current violence and political chaos are the bitter fruit of a social and political process that has been a long time in the making. Obvious targets for blame are the extremists who have explicitly embraced the tools of violence and hate, whether on the Jewish side or the Palestinian side. Think of Kahanist MK Ben Gvir, whom Police Commissioner Kobi Shabtai implied was to blame for May’s Jewish-Arab violence on Israel’s city streets, along with Lehava members, who have been actors in much of the recent mob attacks, and have a history of violence against Arabs and Jewish-Arab alliances, such that both security officials and NGOs have tried to have them banned as a terrorist organization. Some of the Arab attacks on Jews in May’s riots was by criminals (the same ones whom Arab leaders have been desperately begging the government to help curb for the last several years). Hamas’s missiles obviously play a role in increasing Jewish fears and provoking harsh responses. Demagogic religious leaders, social media, demonstrators or counter-demonstrators, and police brutality have all played a role in causing or exacerbating May’s violence. These claims require thoughtful analysis and appropriate – and fair – action.

Militants, ideologues – and the rest of us

But it’s not just militants and ideologues who are to blame. Arguably, many of them consider violence a necessary means to their desired ends. It’s those of us who find this abhorrent who have an obligation to stand up now. As Ami Ayalon, former director of Israel’s Shin Bet and yet another of the high level gatekeepers of security who has spoken out (and, in his case, has become active in trying to bring about political change) wrote in his recently published book Friendly Fire: “If Israel becomes an Orwellian dystopia, it won’t be thanks to a handful of armed theologians dragging us into the past. The secular majority will lead us there, motivated by fear and propelled by silence.”

It’s easy to see the faults in others. But we each have a role to play, however we affiliate on these issues. The fear and silence Ayalon refer to hover above the fundamental question dividing us: what kind of state/s should govern two peoples who see the same piece of land as theirs? Both Israelis and Palestinians have deluded themselves into thinking that the other side will either give up or give in. It’s magical thinking. As complicated as it is to find a pathway of shared living, the alternative is messier in every sense. Just ask the Bosnians.