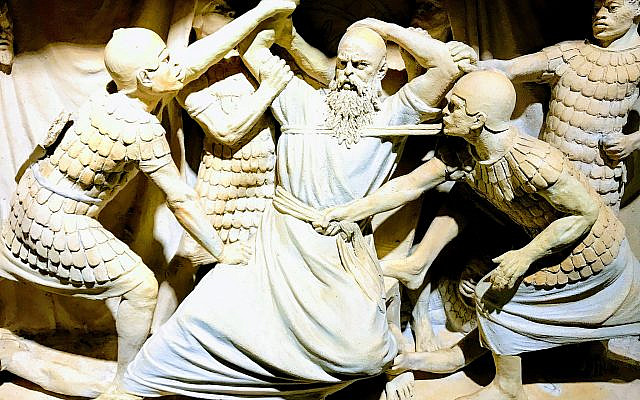 Jewish people, motivated by taking the moral and ethical “high road” whenever possible, must ask ourselves: after so many decades of bloody fighting, maybe we should just compromise with our Palestinian neighbors and give them a state of their own (i.e. the” two-state solution”)?

In fact, all along Israel has repeatedly attempted to do exactly this. Israel agreed to the UN Partition Plan, but this was rejected by the Arabs and they instead invaded, and for decades waged a war of attrition against it. Not only that but the Arab countries ethnically cleansed almost a million Jews from their countries in the Middle East, looting their belongings along the way.

Despite all this, from the Oslo Accords with Yitzhak Rabin to the Camp David Summit and Taba Talks with Ehud Barak, 36 negotiating sessions and the eventual “Napkin Map” of proposed land swaps with Ehud Olmert, and most recently, the Trump “Peace to Prosperity Plan” with Benjamin Netanyahu, however, every time, Israel sought compromise, and no matter how much was offered, the Palestinian leadership rejected it, typically without even a counteroffer. For example Yasser Arafat flatly rejected any and every offer at Camp David, frustrating President Jimmy Carter’s incessant attempts at Middle East peace.

The nations of the world look on with horror at the “plight of the Palestinians,” but they turn a blind eye to the chants of “death to Israel” and as the Palestinians turn billions of dollars of aid into relentless homicide bombs and send thousands of missiles into Israel civilian population centers. The compromise that Israel has shown would end the Palestinian “victim status” and thus endanger their endless money and support that flows freely from the UNRWA to prop up the corrupt Palestinian leadership. The reason that the Palestinian leadership doesn’t want an agreement is that they want the Jews dead “from the river to the sea!”

Arab rhetoric has been consistent from day one, calling for the destruction of the Jewish State (in the PLO Charter, in the Hamas Covenant, etc.) insisting on having all of Israel and killing all the Jews. They backed this up with both armed Palestinians terrorists attacking from within and a multitude of Arab armies attacking Israel from without. In the Khartoum Resolution of 1967, the Arab League, backed by their combined military might and massive oil revenues, committed to the famous Three No’s with Israel: “No peace with Israel, no recognition of Israel, and no negotiations with it,” essentially removing any possibility for a peace deal let alone even recognizing Israel’s basic right to exist.

could not be settled by compromise—they want us dead. We have decided to stay alive.

After 2,000 years of exile and persecution, culminating in the slaughter of 6,000,000 in the Holocaust, former Israel Prime Minister Menachem Begin pointed out that “we have nothing more to lose.” He also saw that the Promised Land is where we must of necessity fight in order to prevent our very extinction.

That Jew, who the world considered dead and buried never to rise again, has risen. For he has learned the ‘simple truth’ of life and death, and he will never again go down to the sides of the pit and vanish from off the face of the earth.

The Arabs portray Israel as a genocidal aggressor to deflect the world’s attention from their true agenda. We just want to live, but they want us dead. Recall that when rejecting the partition plan in 1948, the Arabs were told the reward for conquering the Jews would be money, property, and rape of the Jewish women of Tel Aviv and Haifa.

During the Intifada, the Palestinians slung so many stones at the Jews that Israel realized they needed to remove an innocent ad for visitors to the Holy Land that stated that Tel Aviv was just a “stone’s throw” from Jerusalem. Even today, as the Palestinian leadership mock even the notion of peace, they promise everything from 72 virgins for their martyrs to cash stipends for their families. As Israel Prime Minister Benjamin Netanyahu poignantly said:

From a Jewish theological point of view, I do not believe it for us to give up any of the Promised Land. But for most Jews, it is not really a matter of the quantity or quality of land, but rather as it says in the Hatikvah: “To be a free nation in our land.”

Israel has shown that is willing to make difficult and painful decisions and support Palestinian autonomy for the sake of peace, but will the Palestinians ever compromise at all? As Golda Meir said:

Peace will come when the Arabs will love their children more than they hate us.

Please G-d, the day will arrive soon, when reason will overcome hate, and peace will prevail over prejudice, and Jews and Palestinians can live side-by-side, as neighbors and as friends.