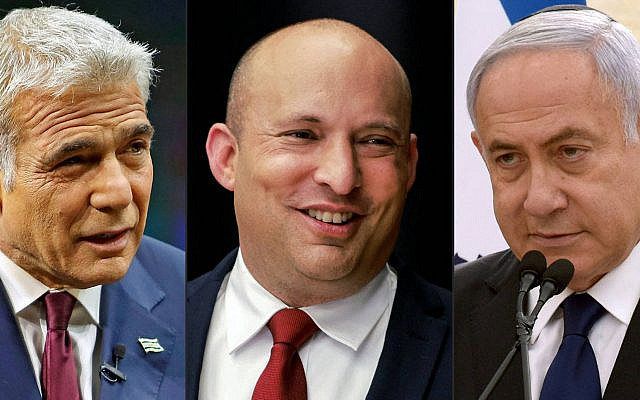 If we focus on the voting process, turnout, counting and reporting of election results, a free press to cover the results it appears that Israel is a bright shining example and model of democracy, amid a sea of autocratic neighboring regimes whose rule is accomplished via threats of violence, imprisonment and bald use of force. Neighboring country’s government leadership changes are never through the results of an election reflecting the will of the majority of the citizens.

Yet upon closer inspection of Israel’s process of forming a ruling majority government, still underway more than two months after the March 23rd election, a most anti-democratic picture is clear to see. In the most recent election over 6.5 million Israeli citizens cast their vote, the man on the left above Yair Lapid heads the Yesh Atid party, won 17 seats of the 120 Knesset seats available (14%). The man in the middle Naftali Bennett’s Yamina party won 7 seats (<6%). The man on the right current Prime Minister Netanyahu’s Likud party won 30 seats (25%).

In Israel’s Parliamentary system of government, a majority of at least 61 Knesset seats are required to form a government, so the leader of the party with the most seats is given first chance to form a coalition of smaller parties which agree to back the new government in a Knesset vote. Netanyahu was granted first chance to form a majority coalition and after four weeks he declared failure so next up was Lapid who has been endeavoring since early May to find enough coalition partners which together equal 61 or more Knesset seats.

This is where the anti-democratic part comes in as the process of forming the majority coalition are secret talks/negotiations held between Lapid and several other party leaders each separately. Promises are made in these back-room sessions which involve cabinet appointments, heads of government ministries, creation of new government ministries, power to allocate tax revenue, appoint judges, Knesset leadership positions and who knows what else?

When Yair Lapid announced a few days ago his success in building a majority coalition we found out what else. The man whose party won less than 6% of the vote will become Israel’s next prime minister!

What happened to the will of the voters? How are the voters and citizens represented in this secret back-room process? What special interest groups and private sector business people have influence over these negotiations? We the voters/citizens will only find out later when an annual budget is presented and appointments are made under the sole authority of the majority ruling coalition members.

Many Israelis are content to overlook the anti-democratic nature of the process as long as it results in the forced retirement of Bibi Netanyahu from the prime minister’s office. They’ll get no argument from me on the importance of forcing Netanyahu to step aside. If for no other reason than after years of investigations, 3 criminal indictments were brought against him, and he’s currently on trial facing potential jail time if convicted.

When I express my dissatisfaction with the process I’m told ‘this is how it’s done here’ and I should accept it as I accepted citizenship. What a poor rationalization though. The damage of the anti-democratic process is all around apparent and obvious. No need to point out every area in this piece, but I know Israel and Israel’s democracy can do better. Israel can have a constitution, Israel can enact term limits, Israel can find a way to have geographic representation, Arab residents of east Jerusalem can be allowed to participate in the elections and Arab/Palestinian citizens can and should be included in a governing coalition.

In short Israel can become a more perfect democracy and model to our regional neighbors of the benefits of democracy. But only if we’re willing to demand and work for changes, as it clearly won’t happen with the prevailing attitude.