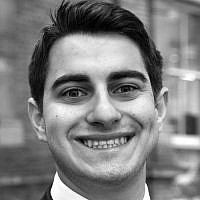 The Blogs
Elliot Orenstein
CAMERA Fellow at KCL
Apply for a Blog
Please note that the posts on The Blogs are contributed by third parties. The opinions, facts and any media content in them are presented solely by the authors, and neither The Times of Israel nor its partners assume any responsibility for them. Please contact us in case of abuse. In case of abuse,
Report this post.

Anti-Semitism has hopped to the forefront of the political conversation in recent years. It seemed like every interviewer of a Labour Party representative brings up anti-Semitism. However, these claims of anti-Semitism within the Labour party have been deflected and delegitimised as simply anti-Zionist arguments and criticisms of Israel. What is the difference between anti-Semitism and anti-Zionism and why has the UK’s relationship with Israel – a small, non-European country – been such a pressing matter as a general election approached? What ideology does Zionism actually describe? Zionism is the belief that the Jewish people have a right to self-determination in their ancestral homeland – Israel. Conversely, Anti-Zionism is the belief that the Jewish people should not have the right to self-determination in Israel, thus Israel should be disassembled.

Judaism can be equally characterised as a religion, a culture, nationhood, and ethnicity. For anti-Zionism to be antisemitic, it would have to discriminate against at least one of these subgroups. Many Jewish people fear that anti-Zionism is used as a veil with which to conceal and legitimise antisemitic ideas as a criticism of Israel. This has been a driving force behind the desire to universally define antisemitism and has led to widespread acceptance of the International Holocaust Remembrance Association’s (IHRA) definition of antisemitism. According to this definition, holding Israel to stricter standards than other countries, or blindly demonising Jewish people over Israel, is antisemitic. Assumptions that parliament’s acceptance of the IHRA definition was to appease Jewish outcry seem implausible. The Jewish population in the UK is a small minority, and the IHRA definition has been accepted readily across the globe, even in countries with little-to-no Jewish people.

Secular Jews and non-jews are welcomed in Israel with equal rights and opportunities as those who choose religious Jewish life. As such, Israel is not a religious Jewish state. Minority religious blocs indeed exist within Israel, that campaign for most laws to comply with their orthodox religious tradition, for example by outlawing public transport on the Sabbath. But pro-Zionist groups and the Israeli government overwhelmingly work towards the safeguarding of Israel as a state that represents all Jewish people, whilst safeguarding the rights of all its citizens. Thus, the most commonly promoted anti-Zionist ideas are not a critique of the religious practices of Judaism.

Israeli culture is a melting pot of the expansive and rich Jewish cultures. The migrants who parented Israel’s Jewish communities emigrated from across the diaspora. As more Jewish and non-Jewish people came from abroad in the subsequent two-hundred years they brought with them aspects of the countries they came from. Israeli food, music, and values are clearly a mishmash of these cultures and Jewish tradition.

The ideas of Jewish nationhood and ethnicity are extremely similar and overlap in places, so it is important to pinpoint the exactitude of their differentiation. Jewish nationhood can be described as a lineage of common descent from the ancient nation of Judea and Samaria. Jewish ethnicity is earmarked by a shared heritage and some biological similarities within certain geographical groups. By campaigning against a Jewish state in Jewish people’s ancestral homeland, anti-Zionism denies Judaism as an ethnicity and nationhood, which is how external agencies have historically defined Jewish people across the diaspora. In Nazi Germany for example, if one had a single Jewish grandparent, they were determined to be Jewish and persecuted accordingly. Israel acknowledges this, however. Anyone with a single Jewish grandparent holds the right to Israeli citizenship upon request.

Zionism is simply the idea of an ethnic group’s right to self-determine itself, and have land to take refuge in. This idea is important as the Jewish people have been exiled from, persecuted in, and discriminated against in almost every country in the world throughout its largely diasporic history. Anti-Zionism is the denial of these rights, which are awarded to most other ethnicities by several human right’s doctrines. Anti-Zionism as a political movement to disassemble Israel is always antisemitic.

To label, any criticism of Israel and its governmental policies as racist or antisemitic is inflammatory and inaccurate. However, outright anti-Zionism is fundamentally antisemitic. Even though the movement rarely attacks the Jewish religion, it seeks to destroy Israel as it is currently, as the centre of Jewish ethnic and national identity, and the most universal one since Ancient times. However, many mislabel themselves as anti-Zionist. There are many who do so, but only take issue with the Israeli government’s actions or Israel’s military presence in the disputed territories. It is imperative that we understand what constitutes anti-Zionism and antisemitism, as aligning political criticisms of Israel with racism can make it harder to fight legitimate antisemitism in the guise of outright anti-Zionism.

About the Author
Elliot is a Mathematics student and a CAMERA Fellow at King's College London.
Related Topics
Related Posts
Comments