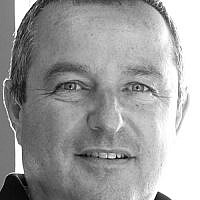 The Blogs
Erez Roll
co founder at Clickto
Apply for a Blog
Advertisement
Please note that the posts on The Blogs are contributed by third parties. The opinions, facts and any media content in them are presented solely by the authors, and neither The Times of Israel nor its partners assume any responsibility for them. Please contact us in case of abuse. In case of abuse,
Report this post. 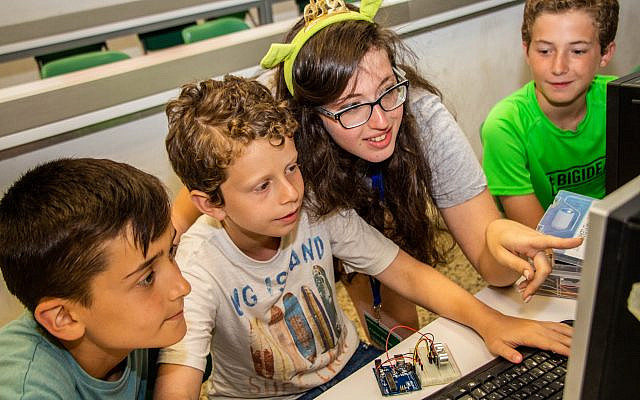 At first, this looks like a traditional JCC camp, with kids swimming in the pool, making arts and crafts and cheering during lunch. Only when you go into the building of the Kaplen JCC on the Palisades, you notice something different – these campers are sitting quietly and creating their own websites. “I’m building a website that will show fun stuff you can do in Israel”, an 11 year old camper tells us proudly “I wrote the code in HTML and now I am putting in the pictures now”. 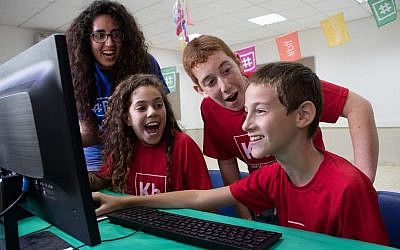 This unique web design activity is part of BIG IDEA Israeli Tech Camp, taking place for the 4th year at Tenafly NJ in partnership with the Kaplen JCC on the Palisades and the Israel Center. Here you will find campers who use their summer to build robots, create computer games and even get to film and edit content for Youtube, while exploring Israeli innovation and meeting Israeli counselors.

“We know that teens and kids these days, and even parents are looking for extra value from their summer activity,” says Dotan Tamir, founder and CEO of BIG IDEA Educational Projects, “Of course they want the fun, sports and connection to Israel that JCC camps provide, but they are also looking to gain new skills during the summer and feeling creative – That is exactly what we do at BIG IDEA camps”.

Three years ago, the Kaplen JCC on the Palisades and the Israel Center in Tenafly have partnered with BIG IDEA to create this Israeli tech camp experience. Up until then, BIG IDEA has been organizing international summer camps in Israel and hi-tech gap year in Israel. “When the Israel Center came to us we were super excited,” says Tamir, “We knew they had a successful and exceptional camp, but they were looking for a way to bring in additional audience who didn’t fit in the existing program. We got to reach out and bring the Israeli community into the JCC who were thrilled to see an Israeli style program coming to their community. We also brought in many campers who were looking to get into computer and technology in a creative way.”

Since the program started, hundreds of campers have already participated in the program, some of them even come back year after year. The BIG IDEA campers are a part of the general camp community, but they get to gain skills of their interest, such as robotics, photography and many more.

Aaron Atlas, director of youth and camping engagement at the Kaplen JCC on the Palisades, talks about his experience: “We are thrilled to partner with BIG IDEA. They bring a unique element that so beautifully complements our robust camping opportunities at the JCC.
Their high tech environment, the engaging workshops, and general enthusiasm that they bring is such an important contribution to camp!”

Spreading out to other communities

Last summer, BIG IDEA’s activity in the USA grew and  new location were added: at the Chicago JCC, at the JCC of Greater Washington DC and a special activity at Camp 12 Trails NY, taking over their Discovery track.

Overseeing all the US programming is Roni Livnat, a long time director at BIG IDEA. “When we reach out to a new JCC we try to understand what their needs are.” Livnat explain the process of creating a partnership, “Some camps want to bring in more participants and some are looking to increase their Israel education program. We are creating a tailor-made camp for each of our partners focusing on what they want want to achieve for their camp.”

What are BIG IDEA’s biggest strengths when they partner with a camp?

“We bring in a lot of content focused on innovation, Israel and the start-up nation. Our tech workshops are great and they get the campers really involved, and the program keeps a wonderful balance between the tech workshops and outdoor fun.

One of our strongest points must be our staff, especially our Shlichim (Israeli counselors). They are enthusiastic, motivated and a great role model for the teens. They are experts in their fields but also have great attitude for kids. For example, one of my counselors who was working with me for 2 years at the summer camps in Israel, was participating in robotics teams since he was 13 years old. When he came to Camp Twelve trails last summer, he had a lot to show the campers there.”

What are the the campers’ experience when they are at camp?

“First of all, they gain a stronger connection to Israel – by bonding with the Israeli counselors, but also with plenty of activities about Israel as the nation of innovation. They get inspired to explore their interests and really practice creative thinking and problem solving – and all of that in a very joyful atmosphere. When we speak to parents after the summer, they tell us how their child really got to express themselves at camp, made strong friendships with other campers and that camp really empowered them.”

“We had a lot of work cut out for us,” Livnat smiles as she starts getting organized for next summer. “We want to spread the word and reach out to as many communities in North America. The sky’s the limit!

About the Author
I'm an entrepreneur with vast experience in leading educational initiatives and am passionate about bringing new ideas to life. The opportunity to make an impact through innovation and technology is my every-day motivation. I was gifted with the skill to naturally build great relationships and networks, which translates to business opportunities and international partnerships. Currently, I’m building the future of online enrichment education at Clickto, while supporting multiple non-profits as a board member. Clickto is a young start-up reshaping the world of online enrichment education. As the Co-Founder, I'm focused on building the business side of the company, on our path to make a large-scale impact worldwide. Since 2014, I have been active in making an impact on youth worldwide through BIGIDEA, together with my partner Dotan Tamir. BIGIDEA is a leading organization in Israel and in the Jewish communities around the world delivering incredible non-formal educational experiences in the fields of innovation, STEM, and digital creativity. Through my network in the US, we have branched out to many new locations in the New York metro area, Chicago, DC, and Houston. I hold an MBA in Business from TLV university. I was the founder and CEO of Lafayette, a leading toy distributor with a mission to impact youth learning. Part of my success stories at Lafayette was the exclusive distribution licenses for brands such as Disney, Power Rangers, Ninja Turtles, Looney Tunes, and more. I have developed the business strategy, marketing, and sales operations and brought the company to generate 25M in annual sales.
Related Topics
Related Posts
Comments