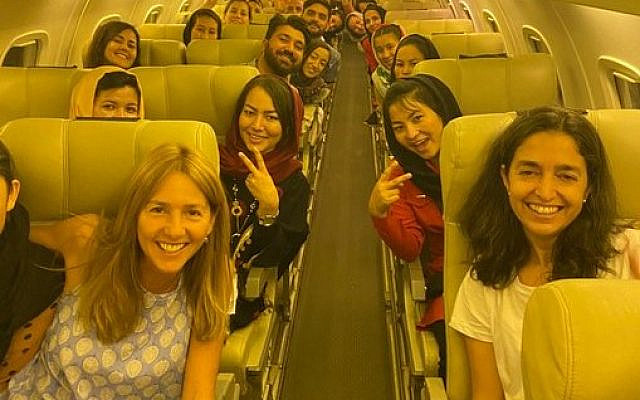 Women from the US, UK, Israel, and Tajikistan collaborated to negotiate with the Taliban and the Tajik government to organize a flight from Afghanistan to Tajikistan, savinig 42 people, including a 3-month-old girl. (Twitter)

Two inspiring rescue operations in early September and the beginning of October succeeded in evacuating 167 Afghan nationals from the chaos that followed the hasty exit of American forces and the Taliban takeover of Afghanistan. Responding to requests from women activists, human rights defenders, judges, journalists, and a family of Jews who converted to Islam identifying itself as the “Jewish background group,” a worldwide collaborative effort found temporary safe havens for these refugees in the United Arab Emirates and Albania. Initiated by Israeli journalist Danna Harman and propelled by a small group of amazing women — most notably Roni Aboulafia in Tel Aviv and Charlene Seidle in San Diego — these daring missions were carried out with the indispensable assistance of IsraAID and numerous donors, volunteers, sympathetic officials, and a handful of helpful governments.

Now the really hard work starts. The needs and concerns of those in transit must be met. Family members of evacuees and other high-risk individuals still have to be extracted, if at all possible. And lengthy bureaucratic resettlement provisions have to be concluded. Those who launched these operations are not resting for a moment: they are more engaged in these onerous — and far less glamorous — tasks than ever before. They are being supported by a widening group of volunteers spread out in a variety of locations. But they will succeed only if governments follow their lead and harness their resources to achieve their goals on a much more massive scale. Here Israel has a special obligation. While its citizens are fulfilling the letter and the spirit of the Jewish dictum, “whoever saves one life saves the entire world,” it can no longer close its doors — as those of other countries were slammed shut on their ancestors only a few generations ago — to those in search of a foothold as they flee oppression, repression, and untold persecution.

Those who want to prop up the new migrants must, above all, be attuned to their voices. The members of the women’s robotics and cycling teams, some of their family members, an impressive array of mostly female human rights champions, along with other extremely vulnerable individuals now biding their time in Albania and the UAE, express — almost on an hourly basis — two main concerns. The first relates to their burning desire to bring out now exceptionally at-risk extended family members still inside Afghanistan. They have compiled detailed lists, locations, and necessary documents, and have transferred these to the dozens of volunteers who helped them escape.

These tireless activists, led by Danna and company, spend hours answering frantic emails, searching for new sponsors, identifying possible exit routes and always calming increasingly frazzled nerves. Yet they need much more help. Administrative support to compile the expanding list of top-priority evacuees is required. So too is any contact with potential transit countries, now that neighboring Tajikistan is no longer an option and the United Arab Emirates has restricted access. Financial support for expenses and transportation out of the country can help the next group of over 200 evacuees already awaiting evacuation. Recent experience shows that all this is about connections and ever-expanding networks of dedicated people and organizations. Each individual effort can contribute to saving yet another person.

The second major preoccupation of those in transit concerns their own resettlement. Only a small group of countries has publicly committed to granting permanent asylum to Afghani refugees. At the top of the list is Canada, which is ready to admit 40,000 – 50,000 in the foreseeable future, followed closely by Germany. Qatar has become a center for those escaping Afghanistan recently. France and Switzerland have begun to take in small numbers. The United States, with the deepest obligation to people who served it during its 20-year presence in the country, has made the largest commitment to resettlement (c. 80,000), but these numbers still fall short of the people to which it is indebted. Israel has refused to provide any assistance, even on a temporary basis.

The handful of countries committed to absorbing these asylum-seekers have stringent requirements. They will only accept first-degree relatives, leaving many of the clans that constitute the backbone of Afghan society stranded. They prioritize human and women’s rights activists, the LGBTQ community, and a few highly oppressed minorities. They require substantial documentation and forms that must be meticulously completed. Above all, they demand patience, as applications are examined, checked, and eventually vetted. The existing team — with Danna now working fulltime with IsraAID support — is scrambling to get access to decision-makers in host countries. They need the help of immigration lawyers, potential employers, sponsors, and anyone who knows someone who can expedite matters. The urgency is growing daily.

In the interim, those in temporary locations need all the help that can be mustered. They suffer from severe anxieties over their loved ones and their own unknown future. The little psychological assistance they receive from IsraeAID psychosocial experts in Albania must be buttressed. The yoga classes provided by Zoom offer some relief, as do the weekly Pilates classes conducted voluntarily from a studio in Jaffa. But much more help is required to prop up fragile spirits and provide for basic needs in uncertain circumstances (including a few doses of telemedicine). More concretely, assistance is needed to help complete often-tortuous visa forms, prepare curriculum vitae, complete university applications, and search for possible employment in host countries. This support network is still hopelessly understaffed. Even one person’s week’s work in one of the transit camps would give an enormous boost to all involved.

A handful of refugees have benefited from the determined efforts of a group of incredible volunteers who are in search of even more funds and human backing. Through a mixture of hutzpah, ingenuity, and sheer hard work, they have gone a long way. To complete their job, they need more helping hands to go that extra mile. They know full well that too many are being left behind, that the prospects of the weakest and the least connected are also the dimmest, and that — however much they would like to assist even more — they cannot solve everything. Yet, they persevere in the belief that every little bit helps.

Most governments have not responded with the same fervor and sensitivity as some of their citizens. Israel is no exception. For a country founded by Jews seeking refuge from antisemitism and systemic oppression, it refused to grant transit rights to the two groups extricated from Afghanistan by its own citizens. Despite entreaties from the highest quarters, Minister of Interior Ayelet Shaked has repeatedly rejected requests for safe passage, breaking with the tradition established by the late Menachem Begin (who provided asylum for Vietnamese refugees after the fall of Saigon) and Yitzhak Rabin (who gave similar refuge to Bosnian refugees under threat by Serbian troops in the mid-1990s).

Shaked’s move was justified by the lack of clarity regarding entry rights to Israel by non-Jews and by an ongoing concern over some 30,000 mostly Eritrean and Sudanese asylum-seekers still in the country. Her position has garnered support in different quarters. Some Israelis fear establishing a precedent for Palestinians seeking family reunification. Others defend the move by underlining the need to first take care of Israel’s own impoverished groups (“the poor of your city take precedence”). And still others are wary of allowing non-Jews, especially Muslims, into the country — as if there are no followers of Islam or Christianity in the land. All these, along with those indifferent to the plight of this latest wave of asylum-seekers, are actively betraying their historical legacy. Their lapse is however, rectifiable. The government has an obligation to itself and to its Jewish heritage to offer succor to those in the gravest danger, lest they suffer the fate of their own ancestors.

The ongoing Israeli-led Afghani rescue operation and the women at its helm are a living reminder of the strength of the human spirit in an increasingly complicated world. They are serving as role models for a new group of volunteers and social innovators. They are inspiring civil activism in other fields — most recently as Greta Thunberg and thousands and thousands of young people have demonstrated — in the area of climate change. And they are compelling governments to do what they should already have done of their own accord. They deserve all the accolades and backing possible from everyone who still believes in the capacity of human beings to act humanely and to contribute to the common quest for a freer, just and more equitable world. That is why I am so proud that Danna Harman is my niece.