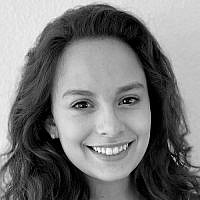 The Blogs
Sandra Marcushamer
Apply for a Blog
Please note that the posts on The Blogs are contributed by third parties. The opinions, facts and any media content in them are presented solely by the authors, and neither The Times of Israel nor its partners assume any responsibility for them. Please contact us in case of abuse. In case of abuse,
Report this post.

Ask anyone in Tel Aviv, New York, or Washington DC, who Israel’s closest ally is and the answer will, unsurprisingly, be the United States. Israel remains the largest recipient of cumulative US aid since World War II, enjoys bipartisan political support in Congress, and has been shielded over 53 times by the US against UN resolutions critical of Israel. However, as clashes between Palestinians and Israelis escalated into rockets and airstrikes in May 2021, shifting US support for Israel has been clearer than ever.

What was once a mutual understanding between the two States encompassed by similar values, the fight against terror, and the importance of the Jewish State after World War II, is now shifting along with US domestic politics. As American politics become increasingly partisan, new politicians are replacing the old guard, particularly in the Democratic Party where social justice movements are pushing for rapid change. Israel is in the crosshairs of this trend.

Influential political figures like Bernie Sanders, have recently questioned the US administration’s $3.8 billion in annual Israeli military aid. This aid partly funds Israel’s Iron Dome, a defense system that intercepts short-range rockets and artillery shells coming from the terror organization next door, which saved countless lives during operation “Guardian of the Walls”. A lack of US support is a threat to Israel. Some may view such threat irrelevant as Israel began working toward military autonomy in the 1990s, however, the reality is that Israel’s dependence on the US still remains vital in 2021.

Recently conducted research presents a new reality in which Americans perceive the Jewish State. A survey conducted this year states that 30% of Americans view the Palestinian Authority positively in comparison to 19% in 2001. The rise in percentage over the years shows an increasing level of sympathy Americans have towards Palestinians. Another survey conducted this year proves that a small majority of Americans believe the US government should exert more pressure on Israel. This is the highest trend of Gallup’s research regarding the demand for pressuring Israel since it began the survey in 2007. Scariest of all, young Jewish Americans themselves have grown detached from the State their grandparents once yearned for. In a survey published this March, the Pew Research Center found that 66% of American Jews 65 and older felt emotionally attached to Israel, compared with 48% of Jewish adults under 30. These record-breaking statistics may just be the start of an unstoppable trend that will slowly leave Israel without the strong partner it has always counted on.

The Israeli-Palestinian balagan has transitioned from “just another conflict” to a “social justice battle”, where common anti-racism chants like “No justice – No peace” were heard in front of the State Department in reference to Israel. Within Congress itself, words like “occupation” and “Palestine” were hardly ever considered appropriate terminology when discussing Israeli politics. However, left-wing Democrats have created a new norm. “We oppose our money going to fund militarized policing, occupation and systems of violent oppression and trauma,” Representative Cori Bush of Missouri, a Black Lives Matter activist said. “Until all our children are safe, we will continue to fight for our rights in Palestine and in Ferguson.” For BLM supporters like Representative Cori Bush, jumping onto the “Palestinian Lives Matter” bandwagon was an easy leap given the similar terminology and emotions behind the Palestinian narrative.

Israel needs America for many reasons. It supports Israel in its battle against delegitimization in the UN and other international institutions. It contributes to 40 percent of the IDF’s budget. It is willing to supply Israel with its most advanced weapons like F35s and also provides technologies for the development of vital missile defense systems. As it always does, Israel must prepare for the worst. Israel must come to terms with its failing relationship with the United States and consider speeding up its path towards military autonomy, all while striving to conserve the vital relationship it has with the world’s greatest power. The unquestionable support for all aspects of Israeli security aid is no longer guaranteed, and therefore Israel should implement measures to ensure it continues to possess a regionally superior military, even if it has to do it without US assistance.

About the Author
Sandra is co-president of Israel Young Pugwash which teaches young professionals Track II negotiation techniques in order to reduce armed conflicts in the Middle East. She is pursuing a B.A. in Government, Strategy, and Diplomacy at the IDC Herzliya, where she is a fellow in the prestigious Argov Leadership Program, as well as a fellow with CAMERA on Campus. Sandra's main research interests are security dilemmas, the Israeli-Palestinian conflict, and international relations.
Related Topics
Related Posts
Comments