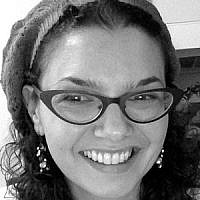 The Blogs
Devorah Wolf
Apply for a Blog
Advertisement
Please note that the posts on The Blogs are contributed by third parties. The opinions, facts and any media content in them are presented solely by the authors, and neither The Times of Israel nor its partners assume any responsibility for them. Please contact us in case of abuse. In case of abuse,
Report this post.

The year I taught Tractate Kiddushin to a group of twelfth graders, I was nervous, and not just because I was a new teacher. For one thing, Kiddushin showcased the ancient rabbis’ unselfconscious paternalism towards women, and I was not sure I was prepared for the discussions that would ensue. Even more nerve-racking, a tractate dealing with marriage rituals (among other things) was rife with opportunities to say the wrong thing. People’s families are always more complicated than they appear. I did not know whose personal trauma I could evoke with a casual comment about marriage or divorce.

My other class was in Makkot, mostly dealing with capital cases, and I had few similar worries. Its concepts were relatable (how can I tell if this witness is lying), yet distant enough to feel largely hypothetical (capital cases being a thing of the past in Jewish courts). Every case began with a crime, usually a murder, and we drew stick figures on the board to illustrate, sometimes embellishing our drawings with drops of bright-red marker blood. Things were wonderfully abstract. I sometimes called my worksheets CSI: High School Edition. We discussed the death penalty frequently and casually, with the distance of the talmudic lawyers we imagined ourselves to be. It’s not that we were callous about murder. It’s just that murder, the kind we spoke about, intimate, person to person, with a knife, was such a remote possibility. We searched for justice in cases that would never come up in our lives.

Last year, I was teaching Sanhedrin, and my class reached the concept of rodef, the violent pursuer: when someone chases someone else with intent to harm or kill, under what circumstances is a bystander permitted to use deadly force to stop the attack? I scoured the New York Times for relevant cases to make the concept more concrete, and found an incident of a man attacking pedestrians in Times Square with a hammer until a police officer shot him. Using talmudic concepts, we debated: did the officer use too much force? Could she have stopped the attacks without mortally injuring the attacker? Could anyone hold her accountable for not making the correct split-second decision?

And then one day, I was describing a case, as usual, in words and stick figures and our stock names Jim and Tim: Let’s say you see Jim chasing Tim down the street with a knife…and I stopped mid-sentence. It was right after the Har Nof massacre. I couldn’t believe how callous I sounded. I was speaking in stick figures when actual axe-murderers were attacking people. Murder, which we had somehow turned into an abstract concept, simply wasn’t anymore.

These days, I live in Israel, and amid the attacks, I sometimes can’t help thinking how horrifyingly easy it would be, were I teaching that class now, to find relevant cases. To read the articles in the newspapers. To discuss the new responsa analyzing how much force is too much when neutralizing an attacker. To decide, ultimately, that such material is too terrifying for a class discussion.

I find myself thinking about the stick figures I used to draw, and about the vividness of the people whose pictures I see in the newspaper: the color of their eyes, the shape of their mouths, the way they held their hands. I find myself noticing details in the photos of their bereaved families: the coats they wore to the funeral, the sunglasses they remembered to bring, the hair that still got brushed that morning. I find myself thinking that teaching rodef right now would be painfully, impossibly difficult.

Sometimes, in the days when murderers were still stick figures, it would occur to me that our conversations in class were too distant from the potential realities we were discussing. I would stop the class and ask everyone to consider what it meant to lose a human life, what it would mean to take one in the context of capital punishment, or in the context of preventing a crime. We would pause, sobered for a few moments. And then we would go on analyzing.

About the Author
Devorah Wolf taught Gemara and Tanakh for many years in the New York area. She works as the Content Marketing Manager at AutoLeadStar, an amazing Jerusalem startup.
Related Topics
Related Posts
Comments