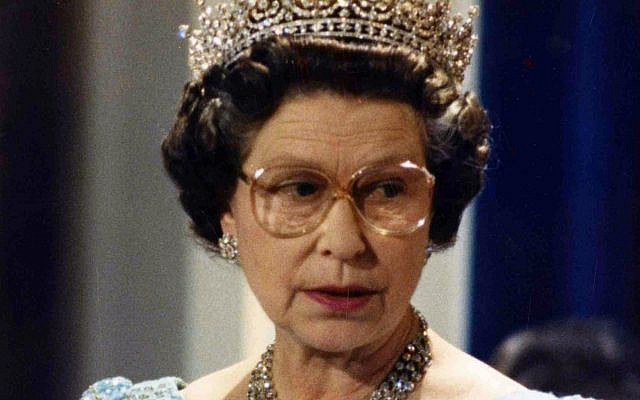 Britains's Queen Elizabeth II delivers a speech during a reception at Charlottenburg Castle, in Berlin, on May 26, 1987, marking the 750th anniversary of the City of Berlin. (AP)

This past week’s media was dominated by the passing of Queen Elizabeth II at age 96, after reigning over the United Kingdom for seventy years. This was true in Great Britain of course, and throughout the British Commonwealth (which still has 15 fifteen countries), but it was also true all over the world, and even in Israel. The Jewish community in Britain also participated, and Chief Rabbi Mirvis not only very warmly eulogized the Queen, he even composed a lovely prayer “On The Passing Of Her Majesty Queen Elizabeth,” in which he noted her “generosity of spirit…dignity, wisdom” and described her as “a most gracious monarch, who occupied a throne of distinction and honour.”

Very interestingly, the one positive characteristic in the prayer that was mentioned twice was justice. In Rabbi Mirvis’ words, Queen Elizabeth “signified order and justice,” and was “a steadfast guardian of liberty, a symbol of unity and a champion of justice in all the lands of her dominion.”

In fact, I personally can attest to the Queen’s devotion to justice, in relation to the Wiesenthal Center’s efforts to convince the British government to prosecute Nazi criminals, who had found a haven in Great Britain after World War II, an aspect of her reign that was completely overlooked in all the obituaries, eulogies, and commentaries.

Starting in the mid-seventies, it became known, initially in the United States and later in the major Anglo-Saxon democracies (Canada, Australia, Great Britain and New Zealand), that many Nazi criminals had emigrated to countries that fought against the Third Reich, by hiding their collaboration with the Nazis, and posing as innocent refugees fleeing from Communism. The United States, which admitted the largest number of such persons, was the first country to decide to take legal measures against these individuals. It established a special agency, the Office of Special Investigations, to prosecute them. As time went on, more and more such cases were discovered in the other Anglo-Saxon democracies, and pressure mounted on these countries to take action.

As the chief Nazi hunter of the Simon Wiesenthal Center, my job was to find as many as possible of such cases, in order to help convince Canada, Australia, Great Britain, and New Zealand to decide to take legal measures against these Holocaust perpetrators, who up to that point, had escaped justice. As far as the United Kingdom was concerned, our saga began on October 22, 1986, when Rabbis Marvin Hier and Abraham Cooper submitted a list I compiled of suspected Nazi criminals who were living in the UK to the British consul in Los Angeles, Donald Ballantine. The list – 11 Latvians and 6 Lithuanians – was accompanied by a request to Prime Minister Margaret Thatcher that the government investigate the allegations, and if necessary create a legal mechanism to deal with the problem.

From the start, the British government was very reluctant to do anything. Its initial response was that despite the Prime Minister’s “deep revulsion at the atrocities committed during the Nazi era,” it was most likely that “legal constraints would prevent the prosecution of Nazi war criminals in Great Britain.” The reason was that prosecution was limited to crimes committed in Great Britain, and extradition to the Soviet Union or Israel was impossible, because of the lack of an extradition treaty with the former, and the provisions of the existing extradition treaty with the latter. In addition, the conservative media was absolutely opposed to prosecution and made no secret of their staunch opposition. Thus, for example, the Times editorial on March 3,1987, reminded its readers that “Britain is a Christian country…[whose] laws enshrine principles of justice tempered with mercy not vengeance,” and concluded that “it is wise and humane to let matters rest.”

And that sentiment was not the only problem we faced. Our major problem was that all the suspects had committed their crimes in areas that were now part of the Soviet Union. As a Jewish defense organization that was fighting for the rights of Soviet Jews to emigrate to Israel, we were hardly the type of group whom the Soviet authorities would help, which is why we appealed to the British government to request the information from the Soviets on a bilateral basis. Thus with little political will to proceed in London, our chances of obtaining positive results appeared to be very slim. Luckily for the cause, MPs Greville Janner and Merlyn Rees formed an All-Party War Crimes Group in the Parliament which helped to galvanize political pressure on the government to take action.

So Queen Elizabeth was indeed worthy of the praise she received as a “champion of justice in all the lands of her dominion.” Rest in peace dear Queen.

About the Author
Dr. Efraim Zuroff is the chief Nazi-hunter of the Simon Wiesenthal Center and the director of the Center's Israel Office and Eastern European Affairs.
Related Topics
Related Posts