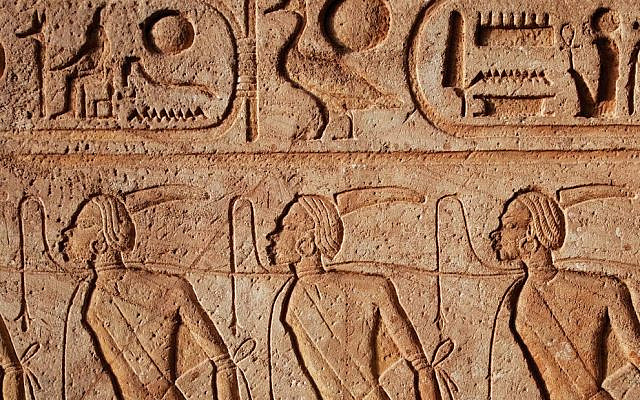 Detail from the book cover of 'Ani Maamin: Biblical Criticism, Historical Truth, and the Thirteen Principles of Faith,' by Joshua Berman. (via Amazon.com)

“A gitten Rabbi Berman: Now that we’re in isolation and had the time to read your book on biblical criticism, we would like a shiur to discuss some of the important points made. Hatzlucha.”

This is the real-life story of Leibel, Yoel, Yisroel, Shaya and Yankel, Hasidim from the sequestered Satmar community of Williamsburg who reached out to a Zionist scholar to explore the forbidden field of biblical criticism.

Sounds like a potential plot line for “Unorthodox II”? Think again. These men are poles apart from the renegade figure of Esty in the recent Netflix drama. And they are a stark contrast to the stereotype of ultra-Orthodox Jews promulgated in this season of the coronavirus: narrow-minded individuals who eschew critical thinking and scientific evidence, treating as gospel the every-word of their community leader. These are men in their 30s who are happily raising families, working as accountants and as manufacturers and living in full devotion to their community and its interpretation of Jewish tradition and Jewish belief. But today, even behind the highest walls the internet seeps in. They seek to understand the complexity of the world they inhabit and make greater sense of their place in it.

I met Leibel and Shaya a couple of months ago at a book launch event for my new release, Ani Maamin: Biblical Criticism, Historical Truth and the Thirteen Principles of Faith. I was shocked to see these two — in full Hasidic garb — in attendance, and that each had bought a book. “The world isn’t as black and white as it used to be,” Shaya explained with a teasing smile. “And we have lots of friends in Williamsburg who would like to hear you speak about these topics.” They are part of an informal network of some two dozen men who routinely share articles and books on a wide range of topics, and meet up in pairs or small groups for discussion.

When five of them finished reading Ani Maamin we met over Zoom. Although all are American born, English is decidedly their second language, and I had to adjust to the cadence of their thick accents. The English content of any given sentence never did reach 100%. But behind the sounds and sights of the Old World, it was amazing to see how intellectually engaged they are. At their initiative, we touched on the writings of Alan Dershowitz, James Kugel and the Princeton scholar of modern Jewish thought, Leora Batnitzky. For nearly two hours we engaged questions such as, is Judaism a nation or a religion? Are the biblical portraits of the patriarchs historically true? What are the limits of what a Jew must believe? “From reading Rav Kook,” Shaya noted, “we learned that the biggest problem with Orthodoxy is that it is scared of what’s out there.” It was liberating for me to see past their accents and garb and to appreciate within them many of the same intellectual and religious proclivities I value for myself, a Martin Luther King moment where I could judge a man by the content of his character rather than by the color of his kippah.

This is all quite extraordinary. There are individuals of many stripes who read widely to gain a greater appreciation of the world we live in and to find their place in it. But it is rare, indeed, to find a community of people who pursue this together and without the social and institutional structures to tell them that this is expected, or even virtuous. And it is all the more remarkable that they are engaged in this common pursuit at that busiest stage of life, while raising small children and working. At the University of Chicago, Allan Bloom famously decried the closing of the American mind. Who would have thought that its awakening in a communal setting would happen in the Satmar confines of Williamsburg.

I wondered how it could be that within the ultra-Orthodox world, an interest in the claims of biblical criticism would sprout up among the Satmar Hasidim, known for their separatist and isolationist ideals. Shaya explained: “Yeshiva University is close to Reform and Conservative, so these issues are threatening. And the Lakewood yeshiva is close to Yeshiva University which is close to Reform and Conservative, so it’s threatening for them, too. But us? We’re so far removed from everything, that it isn’t threatening to us.”

Our meeting of minds was going smoothly until Leibel threw me a curve:

“Will you say Hallel Wednesday?”

By “Wednesday,” Leibel meant the unmentionable holiday of Yom Haatzmaut. I panicked. How could I remain loyal to my Zionist theology without offending their stridently anti-Zionist sensitivities? My eyes flirted with the “End Meeting” button at the bottom of the screen. I swallowed hard.

I asked whether their wives know that they’re reading about biblical criticism. They peeled with laughter.

“You don’t understand,” said Shaya. “Around here, the women don’t have the slightest interest in these things. My wife would never look to see what I was reading. And ask me about what I’m reading? Forget it.”

“And my wife, she can’t read the Chumash at all,” said Yankel.

“They don’t learn limudei koidesh; really, nothing,” said Leibel. “I wish I could change things for my daughters, but I can’t; you can’t fight the… how do you say… the shtut (trans: “state”; society). Even for me to learn chumash with my daughter would make problems.”

“And then they’d have problems finding shiduchim,” Yoel added.

Although pained by his depiction of women’s education, I felt empathy with Leibel’s predicament. We freely reside in the community of our choice. But once members of a community, we are shackled by its prevailing norms. I wish my children were less attached to their cell phones. I wish the bar mitzvah celebrations we made could have been simple, modest cake-and-schnapps affairs, as they had been historically until the affluence of recent decades. But Leibel is right: you can’t fight the shtut, and you can’t tell your kids to live by one set of rules when everyone around them lives by a different set.

But this circle of Hasidim can serve as a shining example that when you can’t fight society, you can still be a quiet agent for the evolution of attitudes and behavior, especially when like-minded people support one another in the effort. Let us pray that we find the wisdom and the brotherhood in our own community to do the same, and let us say “OOmyne.”