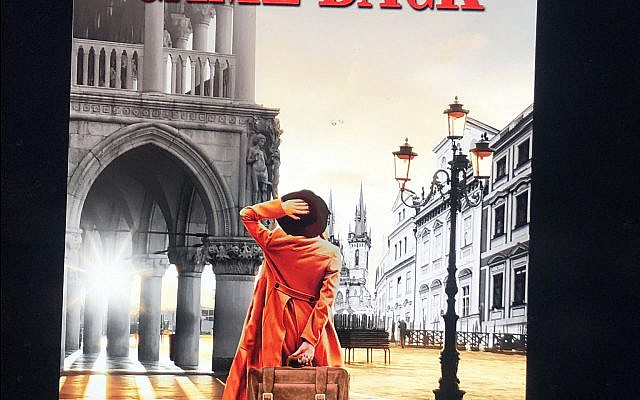 I read this book (written by Yaron Reshef and translated from the Hebrew by Nina Rimon-Davis) as an ebook. I had been told it dealt with Chortkow, the town in Poland (now Ukraine) from which my in-laws came. As I read on I found many similarities between the two stories – both Syma, the heroine of the book, and my in-laws came from a medium-sized town with a large Jewish population, some of whom were assimilated and quite prosperous. The crux of the story takes place in the port town of Haifa in pre-State Israel, which is also where my in-laws lived. But they fortunately remained there, whereas the heroine of this (real-life) story returned to Chortkow, where the Holocaust caught up with her, leading to her tragic death.

The heroine of the book is Syma Finkelman, a woman in her thirties who followed the unusual path of qualifying as a physician. After working in her profession for several years, she decides to take a trip to what was then known as Palestine, where her brother and his wife lived. This was done ostensibly to attend a medical conference there, but she was also considering making it her permanent home.

On the elegant cruise ship that takes her to her destination she meets a fellow-passenger who shows interest in her. Nathan Hoffman is an educated older gentleman who is in the book-publishing business. They embark on an affair, which continues when they reach Haifa and spend time together.

The accounts of life in Haifa in the mid-1930s, the people, the architecture, the markets, as well as of an arduous journey to visit Jerusalem, are full of fascinating details. The illustrations consist of photographs taken at the time, adding another dimension of interest to the book. Similarly to my in-laws, some relatives emigrated from Chortkow to the U.S.A., while most of them remained in their home-town, with disastrous consequences.

Syma’s activities and thoughts are desribed in a convincing way, and we have to take the author at his word (given in his afterword) that he undertook extensive research to authenticate the details he provides.

Some of the chapters in the book describe dreams that the author has provided for Syma, possibly presaging her ultimate fate. I found these intrusive interruptions of the narrative unnecessary and even annoying, but that is a matter of personal taste.

As a whole, the well- written (and well-translated) narrative flows smoothly, and the reader is able to see, hear and feel what Syma is experiencing during her two months in Haifa and her affair with Nathan Hoffman.

But suddenly, for no apparent reason, their affair comes to an end and after only two months in Palestine Syma decides to return to her family and her life in Chortkow. The final chapter takes place in November 1942 in the crowded truck of the cattle-train taking Syma and ten thousand other Jews from Chortkow and the surrounding area to the death camp of Belzec. The scene is described as experienced by Syma, and I found this account very moving, as well as harrowing. I take my hat off to the author for managing to imagine what it felt like to be on that train and undergo the final dehumanizing process inflicted by the Nazis on their Jewish victims.

There is nothing left but to close the book with a sigh of relief and think, ‘There but for the grace of God go I.’