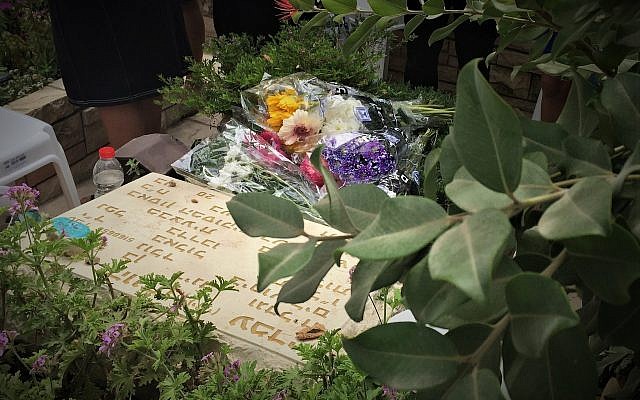 The photographs that fill our screens on Yom Hazikaron — Israel’s Remembrance Day for Fallen Soldiers — are powerful and evocative. Rows of identical tombstones are lit with glowing candles, dotted with flowers, and flanked with flags of blue and white. A mother whispers to a son cut down in his prime. A brother stands silently between the trees. A grandmother weeps at her granddaughter’s grave. A soldier stands vigil, silent and still.

The images are solitary; the settings expansive. 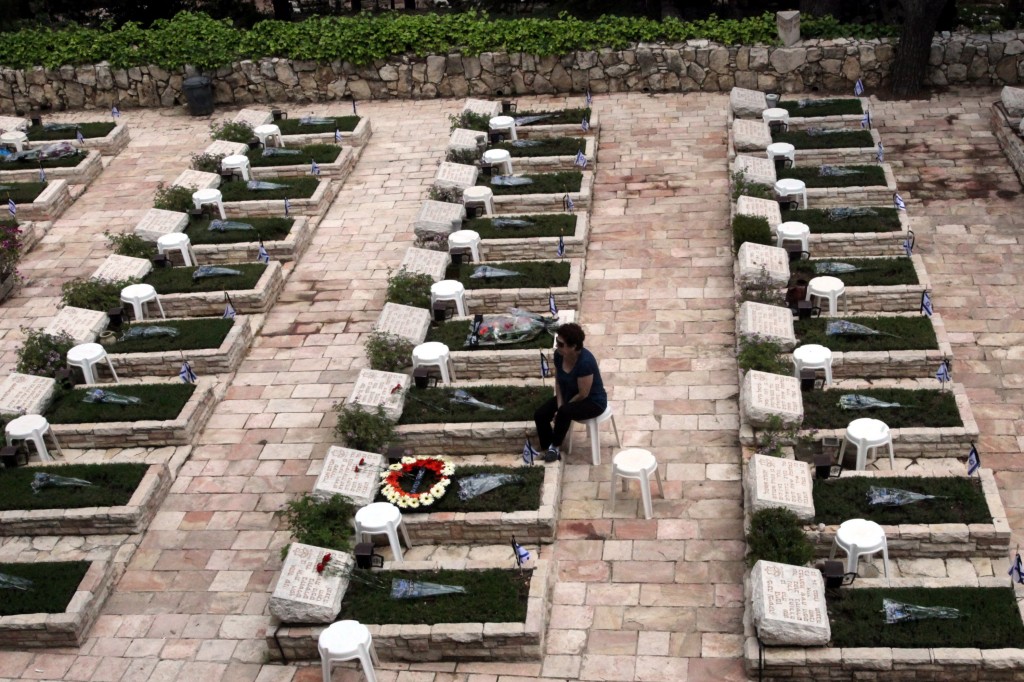 But if you go to Israel’s national military cemetery on Mount Herzl for the siren on Remembrance Day, the scene is very different. As you make your way there, you become part of a large mass of humanity, bound by a common history, a common fate, a common purpose, and a common deadline: to be at a graveside by 11:00 a.m.

The flow towards the cemetery begins on buses in Jerusalem’s outlying neighborhoods and continues downtown on trolleys that run one after the other, filled to the gills with people of all ages. This is the one day a year when the locals are scrupulous about letting passengers exit before they themselves enter. They tread carefully, trying to avoid squabbles as they head to sacred ground, never knowing whether the person next to them is a member of a bereaved family. “Come in, come in!” they call to a soldier at one of the stations, squeezing together so he can fit in before the doors close.

As the trolley nears its destination, it passes a parade of people in blue and white and olive-green, streaming down the sidewalk, as they hurry to get to the cemetery in time to join with the people of Israel in paying their respects.

The pilgrims all converge at the entrance to the cemetery. Once inside, you are handed a pamphlet with psalms and are offered a bottle of water if you look like you need one. Flowers in cellophane are piled on a table, adorned with the word “Yizkor” (“Remember”) and the menorah and olive branch emblem of the State of Israel; you are welcome to take a bouquet for free.

As you make your way slowly up the hill, you are part of a human tapestry. The bobbing heads before you are covered in army berets of all colors, kipot of all sizes, kerchiefs and sun hats, baseball caps, or nothing at all. As your feet trudge up the stairways, ascending from one tier of the cemetery to the other, you see black army boots, red army boots, loafers, sneakers, delicate sandals, and flip flops. White shirts abound; some of them are worn by ultra-Orthodox men with big velvet yarmulkas, their tzitzit dangling on the way up the mountainside. 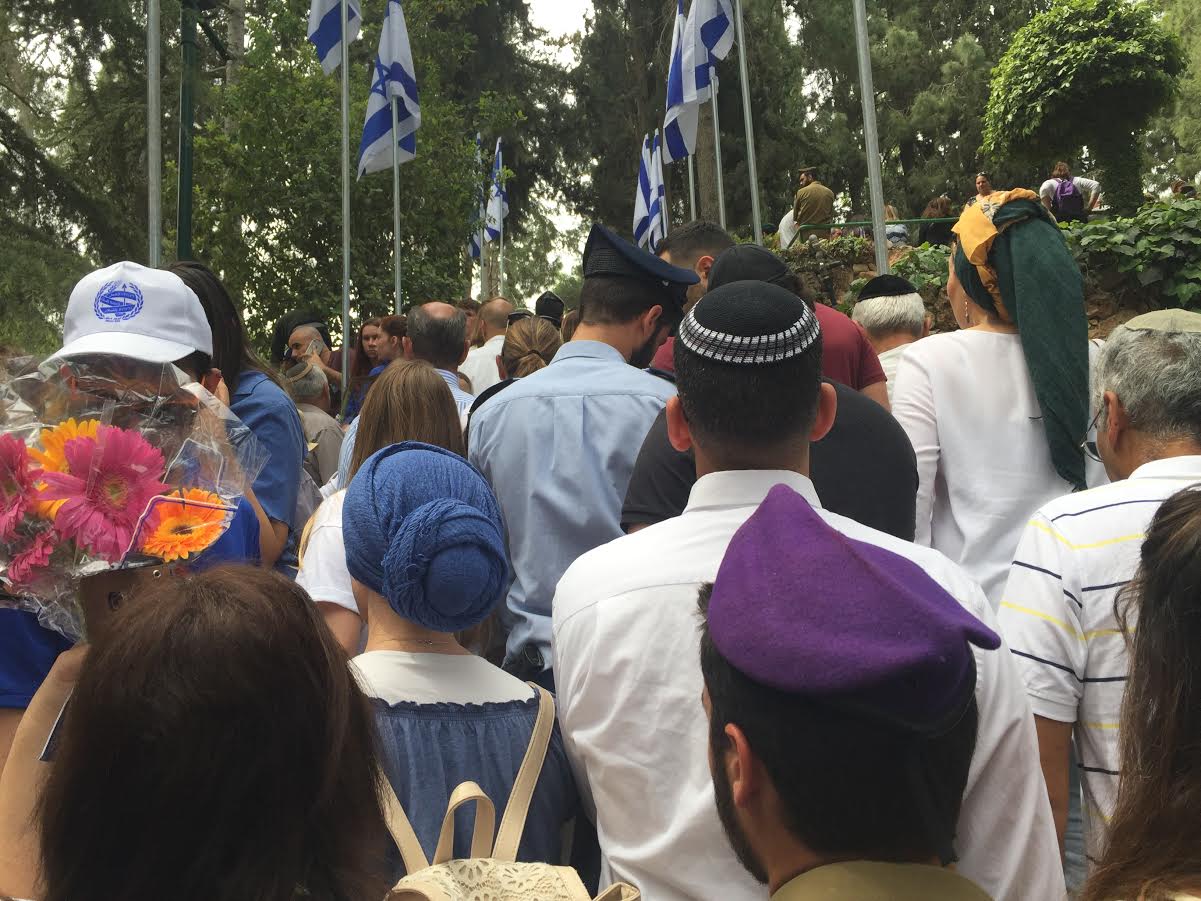 Looking around, you cannot see the graves, just masses of people, congregating in clusters. The terraces above you look like layer cakes, topped with pink and purple geraniums that cascade down the sides. An extra layer of icing has been added today, as people stand alongside the stone walls overlooking the scenes below — a rainbow of army greens, police blues, air force beige, navy whites, and civilian clothes and backpacks of all colors, topped with berets of brown and orange and teal and purple.

If you’re lucky — like me — you do not have a specific destination. My inner circle has never experienced loss of this kind. In fact, I myself have never been here before. But I’m the mother of two soldiers, one of whom is being trained for combat, and both of them are standing at gravesides on Mount Herzl today. One is with Miriam Peretz, whose sons Uriel and Eliraz were killed in combat 12 years apart; the other has been assigned to stand at the grave of a fallen soldier of the Israel Air Force. It does not feel right to stay home and shelter myself from witnessing such grief today; if my children can confront their own mortality, I can confront my fear of loss.

As 11 o’clock approaches, I find myself at the graveside of Yehonatan (Yoni) Emdi, son of Rina and Gedalia, a Golani soldier who fell in a devastating helicopter crash that killed 73 Israeli soldiers in 1997. He was 20 years old, just about the same age as my soldier sons. His parents were blessed with their son for as long as I have been blessed with my own, and have been mourning the loss of their son for as long as my boys have been alive. I ward off the evil spirits.

Suddenly, from afar, we hear the opening of the state ceremony taking place up the hill, as it is broadcast on speakers throughout the cemetery. The moment has come. The siren pierces the air and everyone freezes. Thousands of people are alone with their thoughts while at the same time together. I close my eyes, hearing only the mournful sound of the siren and the delicate chirps of the birds. When I open my eyes, I see two Golani soldiers standing at attention at the graveside, saluting a comrade who fell when he was their age. That’s when the tears flow.

The end of the siren is a communal “at ease.” The clusters close to the graveside remain, but at the edges people begin to move again. Some are hurrying back to work. Others have a list of graves to visit and more families to embrace. Still others are trying to make their way up the mountainside to the official ceremony. The sounds of the El Maleh Rahamim memorial prayer waft over the loudspeakers, and a hush falls over the cemetery as people walk in silence. The speeches being broadcast over the loudspeaker resume and the silence is broken.

The chatter and movement come to an abrupt halt at the end of the official ceremony, when the poignant strains of Hatikvah fill the air and people stop in their tracks. This hope that’s 2,000 years old is what brought us here, what keeps us here, what ties us to each other. This hope is what enables us to keep our sanity as parents of soldiers and is what enables our sons and daughters to serve.

Amidst the towering poplar and pine trees, soldiers and civilians stand firmly rooted in their land, inextricably bound to each other. As the song continues, the lyrics well up from all those in attendance, the sound emanating from a deep, primal place as we sing together: “to be a free people in our homeland, the land of Zion and Jerusalem.”

The masses begin their amoeba-like descent down the stairs, while the bereaved families stay on for some private time at the gravesides. I arrive at the bottom of the hill and step out from beneath the tall trees into the bright sunshine. I find one of my sons — the one serving in a combat unit. One hug isn’t enough when I see him today. I think he knows why. 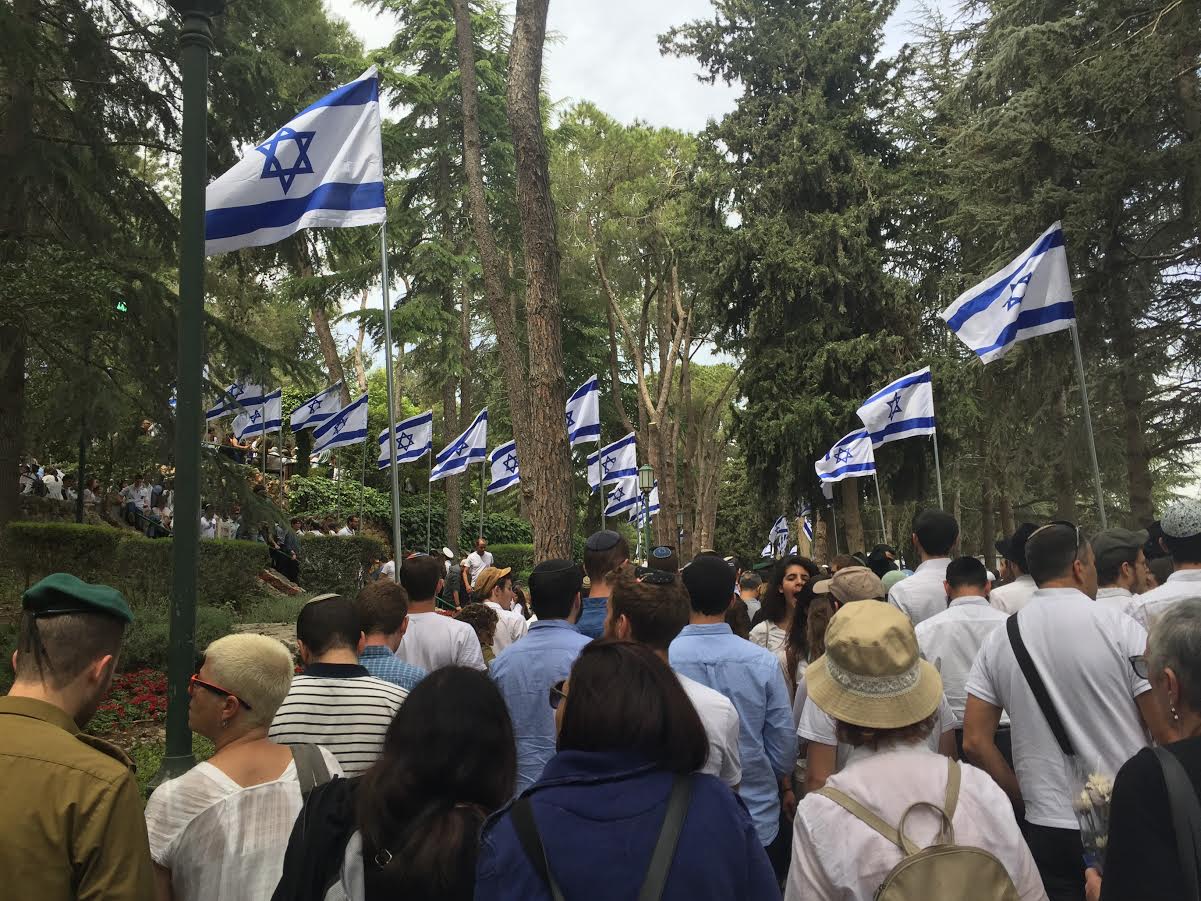 An earlier version of this post appeared in Jerusalem Moments on Yom Hazikaron in 2017.