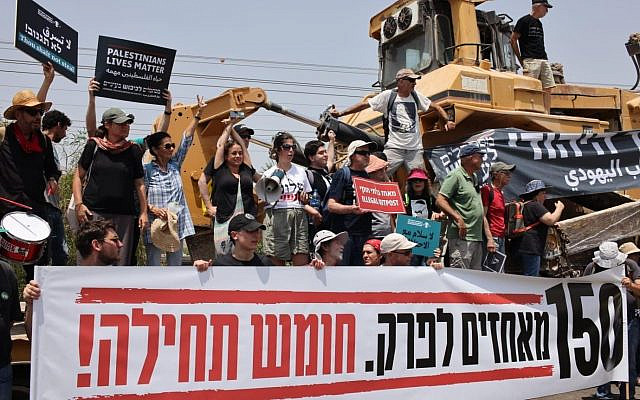 Activists Blocked From Marching On Khomesh May 28th, 2022. From Peace Now Facebook page.

In Israel we are reading “BaMidbar,” the first Torah portion in Numbers.  The portion deals with the preparations to finally leave Mt. Sinai and head into the desert towards the Land of Israel. Many years ago I heard a Karlin hassid speaking to a mostly secular group saying that we can learn about unity within diversity from the camping arrangements in our parasha. Each tribe had its own space and its own flag organized around the Tabernacle. There was a wonderful spirit of togetherness until we asked if the unity he was praising between secular and Orthodox and ultra-Orthodox Jews included Reform and Conservative Jews. He furiously said that if there were any Reform Jews present, they must leave immediately. They had no place in his camp. Diversity only went so far.

Not only does the unity many aspire to exclude non-Jews, but also many Jews are seen as beyond the pale.  Frequently I am cursed when I document settlers and their flocks destroying Palestinian fields, vineyards and olive groves. I am a traitor, I should take of my kippah, etc. This week one young man told me day after day that I am a Hamas supporter.

On the other hand, I met with a pre-army academy this week. I spoke straight forwardly about the daily injustices of Occupation I experience almost every day, including that morning, how they will be a part of that as soldiers, and Jewish wisdom and values.  The opinions were varied, and the discussion was lively and respectful.  What made my day was the young man who came up to me afterwards to say that he very strongly disagreed with much of what I had to say, but that some of my points required him to rethink some of his opinions.  As I told the group, even when we all think that we are talking about life and death, we must find the way to talk with each other if we want to preserve even our limited democracy.

The public discourse around the announced intention of ten organizations to march on the illegal even according to Israel Khomesh outpost tomorrow in order to dismantle it has been fascinating and instructive. I won’t be there because it is Shabbat, but certainly support the idea. Khomesh is the illegal even according to Israel outpost in the northern Occupied Territories that has become a line in the sand.  Ayelet Shaked and Nir Orbach have threatened to bolt the governing coalition if the government heeds the court order to evacuate it.  The issue has become all the more emotional since the murder of Khomesh yeshiva student Yehuda Dimentman.

Many who explicitly or implicitly support the daily violence inflicted on Palestinians either by settlers or the State in the effort to disposes them, are now howling about violence and taking the law into one’s hands. Others ask what the difference is between Khomesh and “illegal” communities such as Khan El Akhmar, Susya, or the other endangered communities of the South Hebron Hills. They ignore the fact that while the supporters of Khomesh are full participants in Israel’s internal limited democracy, Israel unilaterally and undemocratically has determined that these communities that existed before the Occupation are illegal via laws promulgated in a Knesset that Palestinians cannot vote for, decided on by committees they are not a part of, and ruled on by courts with no Palestinian judges.   If it seems obvious that Palestinians can’t vote for the Knesset, than we must begin to honor international law that limits Israeli sovereignty in order to protect occupied peoples that are not part of the society ruling over them. It cannot be that we can unilaterrally do with another people as we wish, according to a discussion conducted entirely in our camp.

The howlers also ignore the fact that tomorrow’s demonstrators are committed to non-violence. If there will be violence tomorrow, it will come from counter protestors or Israeli security forces. Forget tomorrow. There are already pictures of large numbers of armed settlers marching to Khomesh via Burqa. There are reports of shots fired and stone throwing, the army closing off Burqa, and some Palestinians injured.

Demonstrating a total double standard (eifa v’eifa), Defense Minister Benny Gantz has said that the army will not allow the demonstrators in favor of human decency and justice to arrive because it is illegal for Israelis to be there.  Apparently, that restriction doesn’t apply to the settlers living in Khomesh or the thousands of supporters of dispossessing the Palestinians who own the land Komesh is built on that have been allowed to come there to demonstrate against a potential evacuation. At the same time, Gantz has roused the ire of many on the right for telling the Court that the government will heed the orders to evacuate. Of course, very few are taking into account the thoughts and feelings of the Palestinian landowners from Burqa and Silat A-Daher.  Why should Palestinians be part of our discussion or decisions? They aren’t part of our camp. Our camp has the exclusive right to decide what will happen between the river and the sea.

Civil discourse among us is often lacking, we are far from being a unified camp, and the danger of a unified camp is that others are left outside the camp. However, our hope is those who are willing to listen, and vigorously but civilly debate and consider the opinions of others, no matter how much we disagree.

Just maybe we will one day we will understand that every human tribe, each of us with our distinct flag and with our diverse cultures and opinions, are part of one great camp we call planet earth. As we read in our Haftarah from Hosea, may our camp even include the beasts of the field and the birds, and the creeping things of the ground, bound together with God who does not need to “own” us to be obeyed, in a world without swords or war in a covenant of righteousness, justice, goodness and mercy. (Hosea 2:18-22)