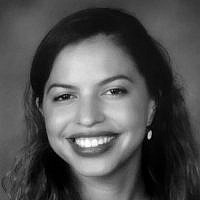 The Blogs
Gabriella Ginsberg-Fletcher
Apply for a Blog
Please note that the posts on The Blogs are contributed by third parties. The opinions, facts and any media content in them are presented solely by the authors, and neither The Times of Israel nor its partners assume any responsibility for them. Please contact us in case of abuse. In case of abuse,
Report this post.

Member of Knesset Hanin Zoabi entered the lecture hall at Columbia University to the sound of frantic clapping; it was more than a friendly introduction, people were enthusiastic. Eventually some people decided to stand. I was paralyzed; I knew that even the act of standing, of respecting Zoabi would mean a lot. It would identify me, regardless if this were true, as a supporter of every view she had ever portrayed, at least in the eyes of some of the Israelis and Jews in the room. I wasn’t ready to stand, so I clapped from my seat.

Ever since I began my academic journey this spring at Columbia I’ve been struggling to decide whether I’d like to stand for anything. I got into Columbia arguably because of my compelling story about being a lieutenant in the IDF, yet simultaneously was warned by my mother not to voice this out loud in “A place like Columbia.”

A place like Columbia? What does that mean? A place that values intellectual debate and freedom of speech? I think I belong exactly in a place like that.

I’ve been cautious my whole life to not say where I was from. We used to call Israel “Truckee California” as a codename, when we were traveling as a family abroad. I came to Columbia believing that I could put Israel on pause, that I could seek refuge in the intellectual world. I was mistaken. Israel, my home, has been hijacked to symbolize so many things for so many people. It is expected of me, an Israeli on campus, to always take a strong stance, to have an opinion, to voice what is bad or good. To some on campus I am an anti-Zionist because I question the occupation; to others I have committed crimes against humanity for serving in the IDF. I can’t win. So I am left silent. I don’t have the answers; please don’t hate me.

I believe we should be given the liberty at an intellectual place like Columbia to decide when we want to take a stance and when we want to just pause, and live in a paradox. I don’t think taking a pause means caring less; silence is not the opposite of action. Rather it can be used to listen and reflect.

Moments before Zoaabi’s dramatic entrance, I turned to say hello to the girl next to me, a Palestinian who came all the way form Penn University to hear Zooabi speak.

Oh boy: I was about to disappoint her. I was either going to have an hour-long conversation with the young woman, in which I would attempt to explain the complexity of Israeli identity; or rather answer vaguely, highlighting my internationalism and not my Israeli militant background. I chose the latter. I was doing well I thought; staying out of trouble, unidentified. I wasn’t even sure the Israelis in the crowd recognized I was one of them; I wasn’t wearing ‘Teva Nayot’.

Truth be told, as much as I’ve wanted to stay silent at school, to observe even this provocative speech, I also wanted to say something and fix everything. Armed with a pen and notebook I was ready to truly listen, and then craft the perfect question. Why was it so important to me to ask a question? I wasn’t sure yet.

When I was five years old we used to go once a week with my kindergarten in Jerusalem to play with the children of the neighboring Arab village “Beit Tsafafa”. I have a vivid memory of sitting in a circle next to a young Arab boy, and thinking to myself how important it was to make a good impression on him. Not because I fancied him, but because there was this conflict, and if he liked me he’d see we aren’t all monsters, and one day we’d both grow up and fix this conflict.

I listened to what Zoabi had to say, I really did, but I was more occupied with trying to craft my question. I wanted to make the same connection with her as I did with the five-year-old boy years ago. I wanted her to know that I care, that I want things to be better, that not all Israelis hate her, even if they don’t entirely agree with her.

I wrote out a few questions, trying in thirty seconds to solve the conflict. My hand was shaking and heart was beating, it was time to decide whether I wanted to identify myself.

My hand was left gripping my pen and I remained silent.