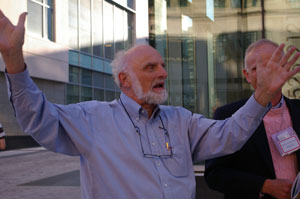 Walter Brueggemann at the United Church of Christ’s General Synod in Hartford Connecticut, 2007.

In 2010, a few days after I wrote a brief article calling out Protestant theologian Walter Brueggemann for his decision to write the foreward to an anti-Zionist text by Mark Braverman, I got a curious email from a scholar who specializes in Jewish-Christian relations. The author, an American Jew who admired Brueggemann, told me the theologian was in fact a supporter of Israel. He sent me an article from Christian Century to prove it.

I challenged my correspondent for proof to back up his claim that I took a passage from Brueggemann’s book out of context, which he never provided. In a subsequent email he asked me to fax him a copy of Brueggeman’s foreward, which I did. The conversation ended there.

I didn’t hear from him again until earlier this year after I contacted him for his response to Brueggemann’s most recent book, Chosen: Reading the Bible Amid the Israeli-Palestinian Conflict (Westminster John Knox Press, 2015).

In response to my query about Brueggeman’s book, my erstwhile critic made no effort to defend the theologian or his book. The publication of the new book was a “shame,” he stated because Brueggemann had written such good books in the past.

I admit that in 2010 I was a bit offended at being accused (without proof) of taking Brueggemann’s writing out of context, but in 2016 I can cut my correspondent some slack.

Confronting the reality that one of the most prominent Christian scholars in the U.S. (whom even I used to admire) is now trafficking in theological antisemitism has to be pretty difficult.

Making matters worse, Brueggemann’s theological antisemitism dovetails quite well with the political antisemitism propounded by liberal Protestant churches in the United States (especially the Presbyterian Church (USA), which published Brueggeman’s book and the United Church of Christ, where he is an ordained minister). Who wants to admit that a one-time friend has become a theological adversary, especially when that newly revealed adversary is revered by so many of his followers?

But that’s what happened.

There was a time when Brueggemann exhibited sympathy for the Jewish predicament, but that sympathy has been eclipsed by a visceral animus toward the Jewish homeland, which looking back, may have always been present.

At first glance, the trajectory of Brueggemann’s writings is similar to that of Gerhard Kittel, a German theologian who defended the Jewish people from antisemitic calumnies in the 1920s. But when the political winds changed in the 1930s, Kittel abandoned his sympathy for the Jews in favor of a theology that legitimized hostility toward Jews in Europe. “Before 1933, Kittel defended Judaism, afterwards he attacked it,” writes Robert P. Ericksen in his book 1985 Theologians under Hitler (Yale University Press).

Brueggemann’s sympathy for the Jewish predicament is showcased in his 1997 book Theology of the Old Testament:  Testimony, Dispute, Advocacy (Fortress Press). In this book, Brueggemann asked, “Must we make allowances in our interpretation in response to the long history of anti-Semitism that has marked the Christian use of the Bible? My answer is a positive one. There is no doubt that the Old Testament has been used by Christians in a variety of ways to assault Jewish faith and to foster anti-Semitism with its virulent political consequences.”

He also wrote that the “supersessionist inclination of Christian scholarship simply kept Jewish reality off the screen of perception, so that silence in the scholarly community, even concerning scholarly questions, amounted to collusion in the systemic violence against Jews.”

Brueggemann reports that he has “no doubt that a theological supersessionism which breeds practical anti-Jewishness, which is rooted in the absolutist claims of Christian theology must be reexamined.”

But in this same text, Brueggemann compared Palestinian leader Yassir Arafat, a man who called for jihad even while he was negotiating with Israel during the Oslo Accords, to Martin Luther King, Jr., Lech Walesa and Nelson Mandela.

In light of his description of Arafat, readers might have to consider the possibility that while Brueggemann was willing to acknowledge the impact of Christian supersessionism, the theologian, despite protestations to the contrary, has always had a problem with Jewish sovereignty and that his anti-Israel animus was masked by his condemnation of Christian supersessionism and antisemitism.

Today, the mask is off. Brueggeman exhibits undeniable animus toward Israel and its Jewish (and Christian) supporters, whom he refers to as the “Zionist Lobby.” The times have changed, and Brueggemann has changed along with them.

Brueggemann places Israeli policies and Jewish self-understanding under intense scrutiny while remaining virtually silent about Muslim antisemitism and jihadist violence against Jews in the region. He keeps Muslim supersessionism and the antisemitism it engenders off “the screen of perception,” or to use another one of Brueggemann’s pet words, “brackets” the issue out of the discussion.

For example, in the 2002 edition of his book, The Land, Brueggemann lambasted the Israeli government for its response to the suicide bombings of the Second Intifada. Brueggemann wrote that Ariel Sharon’s government “is currently undertaking an aggressive brutalizing assault on the neighboring Palestinian population.” He then described Sharon’s actions as being done “in the name of the God of Israel.”

Brueggemann rooted, or affixed Israel’s response to the Second Intifada to a vicious and self-serving reading of the Hebrew Bible, as if another state without any connection to the Bible would respond more peacefully to suicide bombings in its major cities.

Brueggeman’s tendency to root Israeli policies in a self-serving reading of the Bible manifested itself again when he endorsed Braverman’s book, Fatal Embrace. In his foreward, Brueggemann affirmed Braverman’s assertion that the Jewish belief that they are God’s chosen people was “the root cause of the conflict,” as if Jihadist antisemitism, rooted in the Koran and in the sayings and life of Mohammad is not a root cause of violence against Israel.

Two years after his endorsement of Braverman’s text, Brueggemann endorsed Zionism Unsettled, a nasty bit of anti-Israel propaganda produced by the Israel Palestine Mission Network of the Presbyterian Church USA. This book, which reported baldly that “Zionism is the problem,” was so hostile and dishonest that PCUSA stopped selling it, but not until after it was endorsed by that inveterate antisemite and Holocaust denier David Duke.

By endorsing Zionism Unsettled, Brueggeman gave his blessing to the PCUSA’s descent into political antisemitism.

He has reaffirmed that blessing in his book, Chosen, an ugly theological assault on the legitimacy of the modern state of Israel. Yes, Brueggemann declares in his text that he is grateful for Israel’s establishment and is committed to its security, but his fact-free critique of Israeli policies is so ferocious and devoid of context that it is impossible to take this affirmation seriously.

His main gravamen against Israel is that it fails to treat the outsider or the “other” with the loving kindness called for in Deuteronomy.

If modern Israel is going to lay claim to the land promised in the Bible, it “must conduct itself so that all other peoples receive the blessing of God,” he said in a webinar about his book in early December 2015. Brueggemann provides little insight in how Israel is supposed to behave when these peoples seek its destruction.

Brueggemann states that he finds efforts to frame the Israeli-Palestinian conflict in terms of antisemitism “unpersuasive.” Apparently, the antisemitic incitement broadcast on Palestinian television in both the West Bank and the Gaza Strip, the anti-Jewish invective in Hamas’ charter and the ongoing anti-Jewish rhetoric broadcast by the leaders of Fatah, which controls the Palestinian Authority, are not enough to persuade Brueggemann (who condescendingly refers to Palestinians as “vulnerable adversaries”) that there’s a problem.

Brueggemann is quite willing to acknowledge Christian and Western antisemitism but assiduously refrains from addressing the issue of Muslim and Arab antisemitism.

This is not an innocent rhetorical act or omission on Brueggemann’s part. In Chosen, he quotes abolitionist James Russell Lowell who stated, “New occasions teach new duties.”

Fair enough, but if the rise of virulent antisemitism in the Middle East and Europe does not qualify as a “new occasion” imposing “new duties” on Brueggemann and his followers, then what does? If Christian supersessionism is bad, as Brueggemann so cogently admitted, then what about Islamic supersessionism?

There’s another reason as to why Brueggeman’s silence about Islamic hostility toward Jews and Israel is no innocent act. As stated above, Brueggemann continually lambastes Israel for not showing sufficient loving kindness to the other. “In the current state of Israel with its Zionist policies,” Brueggemann writes, “the exclusion of the other (now the Palestinians) is a dominant motif.”

To be sure, Israeli attitudes toward the Palestinians have hardened in recent years, but this hardening of attitudes is the result of the Palestinian rejection of numerous peace offers, numerous attacks from the Gaza Strip, which Israel withdrew from in 2005, and ongoing violence from the West Bank.

Instead of contending with this reality honestly, Brueggemann, like Gary Burge before him, invokes Israel’s inability to make peace with adversaries who invoke Muslim teachings to justify their attempts to destroy the Jewish state as proof that Israel has violated the rules that come with the land as set forth in Deuteronomy.

With such rhetoric, which places Israel between the hammer of Islamist violence and the anvil of merciless Christian judgement, Brueggemann’s writings serve as an accelerant to anti-Zionist and anti-Jewish sentiment in his audience of progressive Christians in the United States.

One of the major themes in Brueggemann’s book on the Old Testament is that the rhetoric of the Bible attests to the existence and sovereignty of a righteous God who cares very deeply about the wellbeing of humanity. This God, Brueggemann writes, can and will act and respond to the problems that present themselves in creation in an astonishing ways. This God, Brueggemann writes, has a “ready capacity to be present in situations of trouble and to intervene decisively in the interest of rehabilitation, restoration and well being.”

This God is also capable of judgement, Brueggemann warned in the webinar that took place in December 2015.

“This God is no Mickey Mouse,” he said. “This God will not be mocked! This God takes seriously God’s will for the world.”

If that’s the case, then why is Brueggemann so silent about the threat of triumphalist and supersessionist Islam to world peace, human rights and the general wellbeing of humanity? Does God not hear the cries of the victims of Jihadism? Does Brueggemann? Will God not act? Will Brueggemann not speak? Is God so obsessed with Israel’s sins that He cannot act in response to the suffering of peoples in the rest of the Middle East?

Why is Brueggemann and his audience in the mainline community so silent about Islamic hostility toward Jews and Israel? Toward Christians? Toward Yazidis? When will Brueggemann formulate a response to the central question facing Christians and Jews in the 21st Century: How do people whose faith is rooted in the Bible respond to violence perpetrated by people whose faith is rooted in the Koran, the Hadiths and the Sunna — sources that offer up a very different understanding of God and the proper response to the human condition?