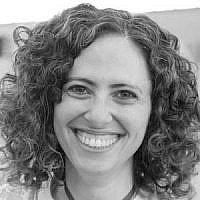 You need to take a shower. But you just know what’s going to happen; you’re going to get into the bathroom, nervously yet bravely undress (it’s all part of being a true Zionist), step into the shower, lather up your hair and then, with suds running down your body and across the now-slippery floor, the siren will go off.

And you’ll stand there for a half a second that feels way too frivolous an amount of time, as you decide what to do… Do you rinse? No, of course not! But you do turn off the water, right? And what do you cover up with? You’ll probably just wrap your towel around you, praying there are no breezes where you’re headed.

And how will you run as fast as possible while not slipping? (And will you grab your cell phone? And will you lock the door behind you?)

Worse than that scenario (or is it?), as you are taking your shower, you notice something of almost no significance during “regular” times – a shower is practically deafening. It seems like a real possibility that you won’t hear the siren at all.

Of course if Murphy’s Law – the one everyone is thinking about as they undress for their dreaded, yet sorely needed shower (I mean, you’ve put it off enough already and it’s July in Israel) – really were to take place for every single Israeli taking a shower, doesn’t that mean the sirens would be sounding 24/7?

Well, honestly, they practically are.

And that is not funny. At all.

My nieces in Bat Yam are terrified. They won’t leave their neighbors’ home because they have a reinforced security room. I have slept fully dressed with the lights on twice in the last week. Not that I slept well. And still, every night, I can’t decide if I should put my phone on complete silence, without vibrate, as I normally do, or if I should leave the vibrate on because maybe I should be available at all hours for some reason, whichever reason that is. My mother had a panic attack, just totally overwhelmed with the news of rockets after more rockets and sirens and thinking of the safety of all of her offspring, spread around Israel. And my sisters are largely taking care of all their children alone – grab and run is the name of the game.

And yet, we laugh. Because grabbing and running is a legitimate source of comic relief (as long as you make it in time).

My 15 year old niece was telling me how when all 10+ kids went running for the bomb shelter at my parents’ towards the end of Shabbat yesterday, she was hysterically laughing the whole way down. The siren went off. Most of the kids were out on the balcony and they all starting yelling, “There’s a siren! There’s a siren!” The big kids grabbed the small ones. The whole rowdy bunch stumbled down the stairs, practically knocking each other over. They got to the bottom and found the shelter locked.

Above them was the neighbor, a quiet man who lives alone, who, it seemed according to my sister’s reports, preferred to be hit by a rocket upstairs rather than have to be with all of my relatives in the theoretically unlocked and quite crowded bomb shelter.

Some people seem to hold it against Israel that we have a weapon developed specifically to protect civilians as opposed to attack the enemy. Some people think it’s unfair that we all know exactly what we’re supposed to do and most of us do it every time, in order to protect ourselves while at the same time we know that we’re being protected by the beloved Iron Dome (funnily enough, a similar love was felt towards Nachman Shai, the then IDF spokesman, during the Gulf War). Some might find it very curious that much of the population follows the red alerts taking place throughout the day, even those far from their own homes, that Israel’s main pop music station, Galgalatz, announces every single red alert real-time, throughout the day whether in between songs or in the middle of the news.

All of this care for preserving life allows us, on top of that, to laugh about it (when we aren’t having panic attacks).

Because we made aliya (moved to Israel) just in time for the Gulf War of 1991, my family learned immediately from Israelis that you laugh at war. Our “ulpan” (Hebrew classes) consisted of the comedy shows that popped up on Israeli television in honor of the war.

There was Haolam Haerev which cracked us up despite our fresh-off-the-boat Hebrew. Here is one clip making fun of Saddam:

(It still cracks me up.)

And all these years later, here is an audio clip created for the 2012 Pillar of Defense – a similar situation to today’s, mocking the Galgalatz DJs, supposedly “typical” Tel Avivians, who are often said to live in their own little bubble (sorry for all the Hebrew – you know, Israel…):

Besides people being hurt or injured, everything that is stressful during wartime is also the butt of a joke on the other end. The fact that a blessed breeze has come to visit but blowing through partially closed windows, all of us keep thinking it’s an air raid siren… that’s funny. The fact I have an entire debate with myself about whether or not I should walk through the park because if the siren goes off while I’m in the middle, I don’t know where I’ll run to but maybe I could walk along the outskirts of the park which are closer to buildings but no, I opt to walk straight through, feeling brave or crazy. That’s funny.

The fact I probably had over five false alarms in my head during the writing of this blog post (my poor heart) – that’s just insane.

So, no apologies. Having your life shaken makes people do things, like appreciate the ones they love a little more, appreciate being in a quieter part of the country (for once) and feel such gratitude for the people, things and the Greater Being that are all protecting us.

All of this has a profound effect on us which, among other things, is expressed through humor.

About the Author
Deena is a new mother, a project manager and a writer living in Jaffa.
Related Topics
Related Posts
Comments